G&L Will Ray Tribute Signature with Hipshot B Bender 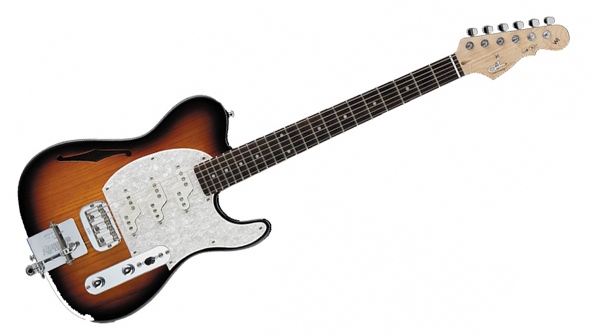 If you want a guitar like the Nashville sessioner and one third of the Hellecasters Will Ray, then G&L has launched its 'made in Indonesia' Tribute series, which replicates Will's G&L custom shop versions at a fraction of the cost. The 'Tribute' series guitars feature all-American hardware, so pick ups, pots and the fantastic Hipshot B-Bender bridge should be exactly the same as on Will's own guitars. Indonesian build quality is also generally very good and our review guitar is a very fine hot rodded Telecaster-style instrument indeed.

The body is chambered with a cool F-hole and made from my favourite tone wood, swamp ash, which is a light and resonant wood that is sweet in the highs, tight in the low end and with a nice bark in the mids - perfect for guitars aiming for that Stratocaster or Telecaster territory. On board we have G&L magnetic field Z-coil pick ups for the neck and middle, with a slightly hotter over wound to Will's specs version in the bridge. I am very impressed by the sound and response of these pick ups which impart a really sweet sounding 'snap' that is both woody and fat. Obviously the chambered swamp ash body is a contributing factor but still, the pick ups are certainly full of tone and overall the guitar gives the impression it could easily switch to most styles of music in the right hands. Added versatility comes from the push-pull tone pot which gives you additional pick up combinations of neck and bridge or all three pick ups together. So you can basically get some beautiful Strat, Tele and P90 style tones from this one guitar, and every pick up setting you select sounds musical and expressive.

To add to the fun, we have the onboard Hipshot B-Bender, which I must emphasise I have never used until this guitar review, so I apologise if I am not up to Will Ray standard, but if you have a fair understanding of your inversions on the top four strings, it won't be long before you get that B string moving in ways that can't be done normally. It's great fun and a real cool sound once you are close to understanding what it does and how you do it, which involves pushing your hip against a tough looking bar that in turn raises just the B string, to create some great pedal steel style sounds. Hence the first standing up guitar review this magazine has seen! (no, we're not paying extra! - Ed)

You also get with this guitar, as part of the whole Will Ray package, something called a 'Stealth Slide' and a Stealth Slide Will Ray instructional DVD. The Stealth Slide is basically a steel slide that you wear like a ring, thus enabling you to play as normal but slipping in some cool slide licks. Part of the magic of Will Ray is what he does with the stealth slide, the B Bender and then the combination of both. In the DVD, Will shows you many tricks and licks, but be prepared to practice, because he makes it look easy, and it simply is not!

Overall this is a great guitar for the money, as I would expect from a name like G&L. I have played a few of the all-American G&Ls over the years, and they have consistently been really nice instruments. This is the first Indonesian assembled G&L I have played and again I'm impressed. The guitar sounds great and the B-Bender adds a huge dimension you can't get from most other guitars out there.

To sum up I would say great fun (if not a little scary when you have never used a B-Bender before and you are expected to demo it on a world wide online magazine straight away!) and I'm most impressed.