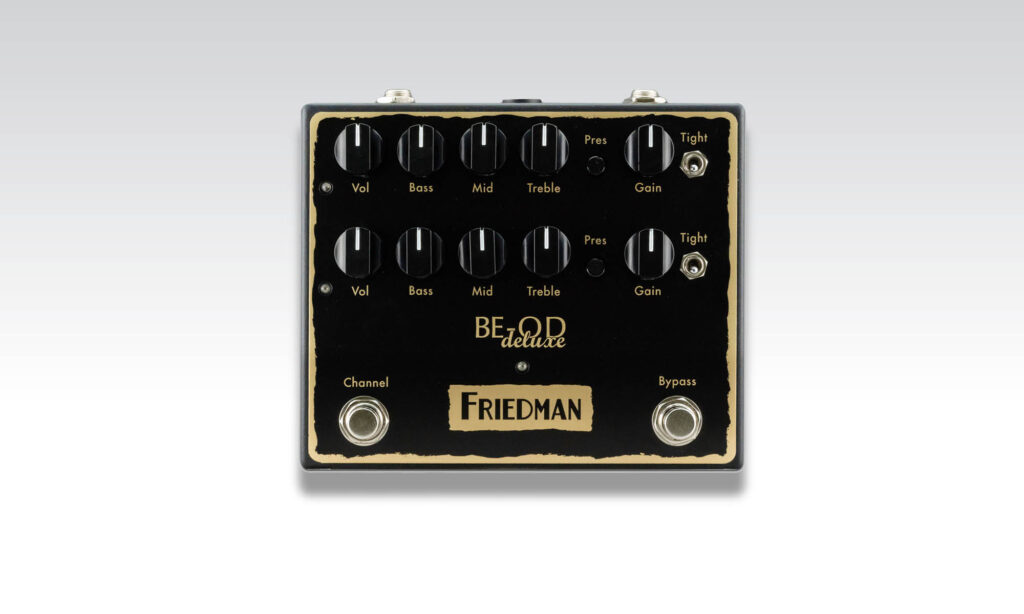 Friedman may be most synonymous with high-gain sounds, especially with artists like Jerry Cantrell (Alice in Chains) and Bell Kelliher (Mastodon) on their roster. However, in the shape of Friedman BE OD Deluxe and Golden Pearl the brand are offering more tonal options than you may be expecting at first glance. Here's Sam Bell with the full breakdown.

Friedman has been making a name for themselves with the advent of their hugely popular amps over the past few years. One of their flagship amps has to be the BE100; the BE100 is like a Hot Rodded Marshall on Steroids. Due to the popularity of the amp, we now have the BE-OD pedal which is designed to capture the sound of the amp's drive channel in a stompbox. Today I have the pleasure of looking at the BE-OD Deluxe, which gives us even more choice! I will also be taking a look at the Golden Pearl pedal from Friedman, which isn't quite as ferocious as the BE-OD but gives us something a bit different. Let's dive in.

The Friedman BE-OD Deluxe is identical to the BE-OD pedal with the exception of it now having two channels which feature the exact same sound, one of the channels has been voiced to have a little less gain than the other. These two channels are controlled by a foot switch, and the pedal itself is activated by a second foot switch. Before I get stuck in with the controls, it's important to point out that this pedal gives you the option of tailoring how much gain you get from each channel via an internal trim pot. The pedal itself gives us everything from a mild gain all the way to an extremely saturated sound. However, with some tweaking of the trim pot you can either reduce this or enhance it to your taste for each channel. The pedal's sound can also be enhanced by using an 18-volt input to give more harmonic clearness and headroom to the pedal. However it works fantastically at 9 volts as well.

Each channel gives us the classic controls, Level, Gain, Treble, Middle and Bass. We also get to tweak the high end further by the addition of a smaller presence knob. The EQ is very interactive with this pedal, at 12 o'clock settings we already have plenty of gain with a slightly scooped mid-range however making small adjustments with this pedal is the way to go. One slight tweak of the middle control either way gives us massive results. The same isn't true for the gain control, at lower settings the tone does become less saturated but the overall drive of the sound doesn't change much, it becomes a little crunchier, but it's the playing feel that changes the most. When we crank the gain, the sound does fatten up and notes sustain with more overtones than before. This is okay however as this pedal is designed to get you the BE100 amp in the box, as soon as you stomp on it, that's the sound right there! On the far right of each channel we have a 'Tight' toggle switch, this gives us 3 levels of low-end response. You could see this as a 'resonance' control that you might find on some amps, at the full setting the lower end becomes more focused resulting in a faster attack and release of the drive sound. Perfect for more modern styles of playing. Using the middle or lower setting gives the pedal a little more sag, which lets the notes bloom out a bit more and the harmonics come through.

This pedal is perfect for modern styles of playing, if you are looking for something with an American edge to the sound, with tons of sustain and tone shaping options then the BE OD Deluxe is well worth a look!

The Golden Pearl pedal from Friedman is a different bag of cats entirely, this pedal's focus is on either driving the clean channel of a valve amp or pushing an already driven amp into smooth sustain. It's not super high gain, and it's meant to be a very transparent drive that remains true to your playing. In the video demo, I used this pedal in front of a very lightly driven clean channel of a valve combo. This pedal is nice and simple, featuring a Volume, Tone and Drive. The Drive gives us a very transparent and sustaining crunchy style of overdrive that would be perfectly suited to a Blues/Classic Rock situation. We can further enhance our tone with this pedal through the use of the two toggle switches. One toggle switch on the left of the pedal gives us a three position hi-cut feature giving us further control over the high end of the frequencies from this pedal depending on what pickups and amp we're using. The second toggle switch gives us control over three different types of clipping which changes the voice of the drive sound and how it feels to play through. Switching between Diode, LED and no Clipping options.

Even though this pedal appears simple, it's very versatile depending on how you wish to use it. You could use it as a clean boost to enhance or add a certain flavour to your tone, or you could use it to make your valve combo sing with tremendous harmonic overtones flowing from the speaker.

Both of these pedals feature the unique design and build of all Friedman Products; they are robust and quality. These are two very different pedals made by the same company, and it's awesome to see them deliver quality on both sides of the gain coin! If you're a rocker then definitely check out the BE-OD, if you are a roots bluesy player then the Golden Pearl is what you're looking for! 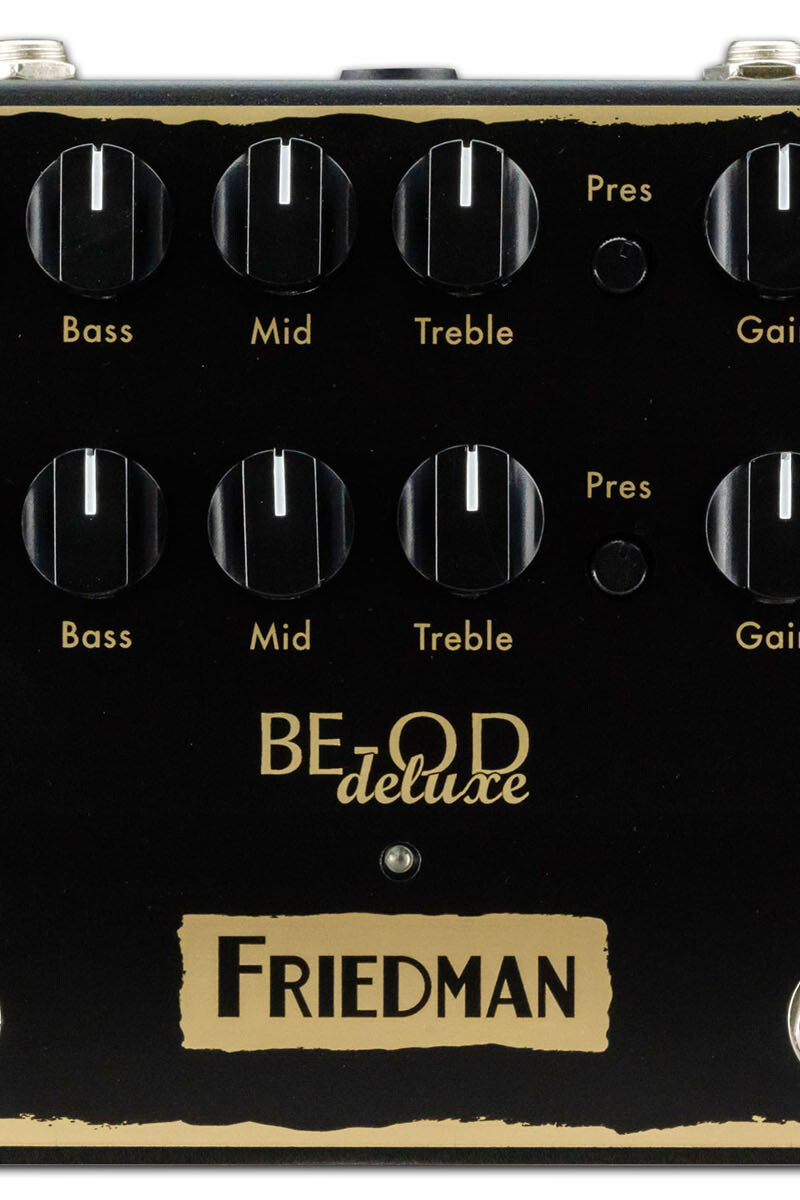 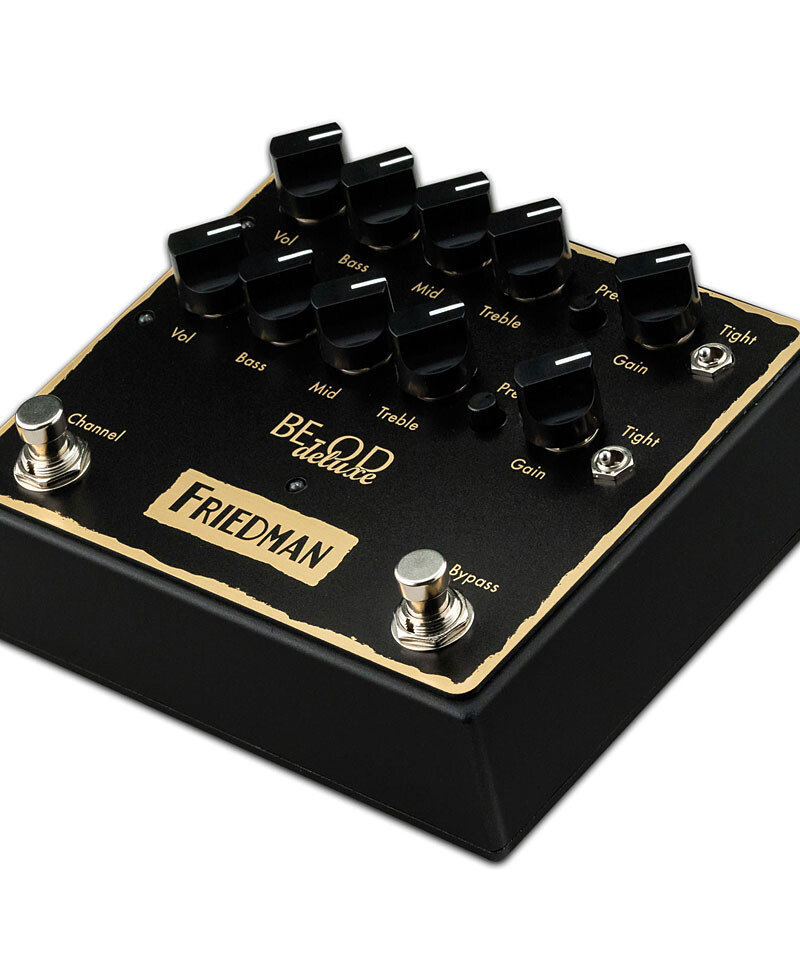 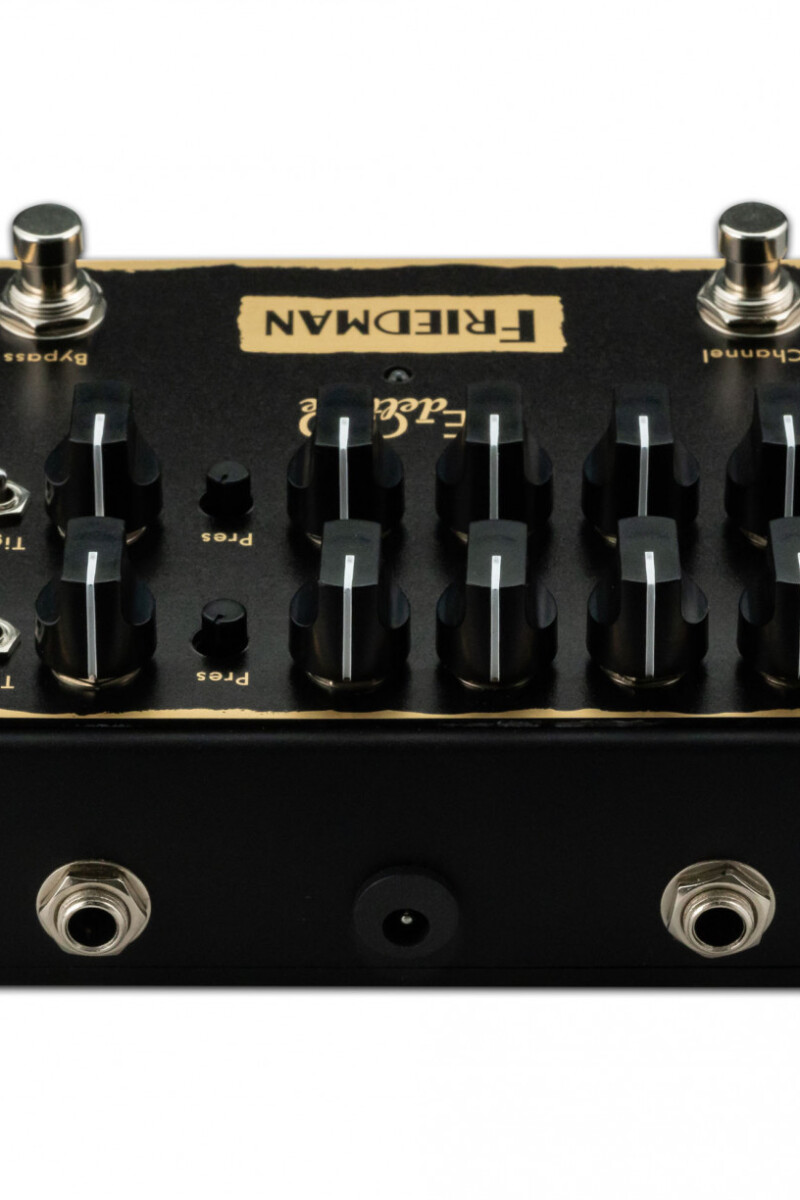 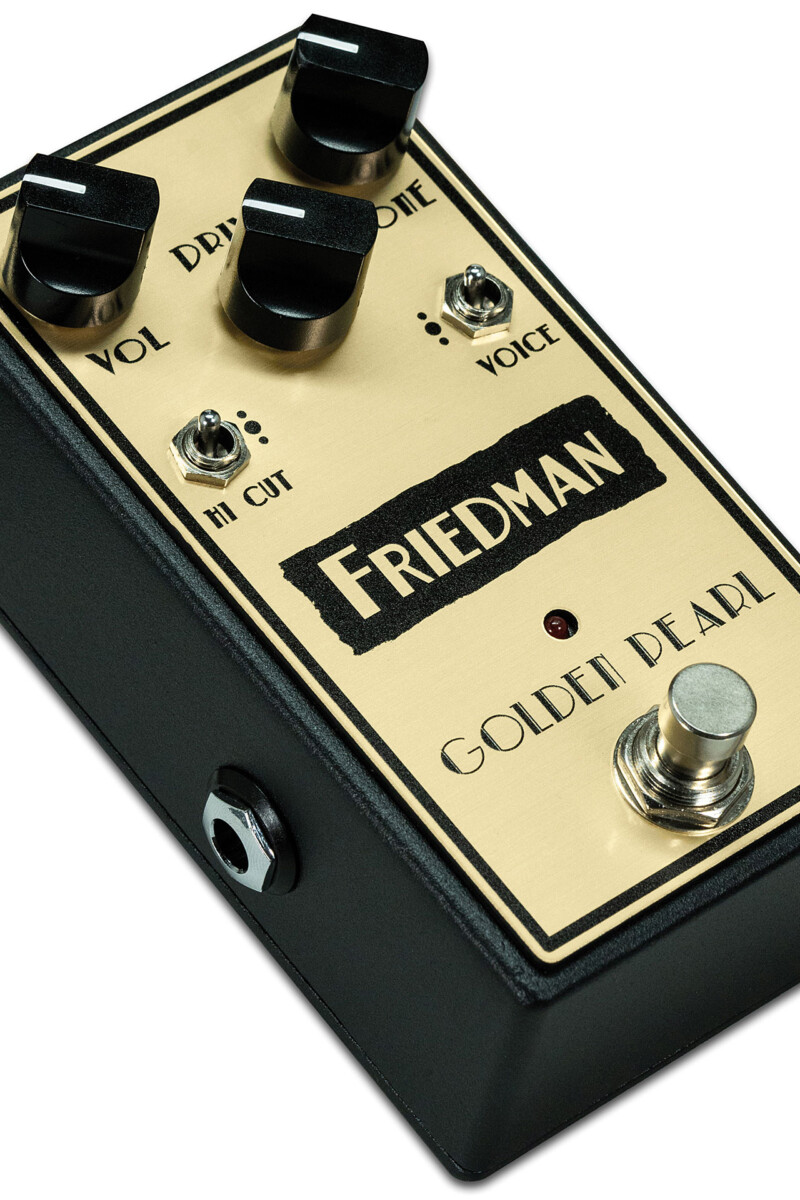 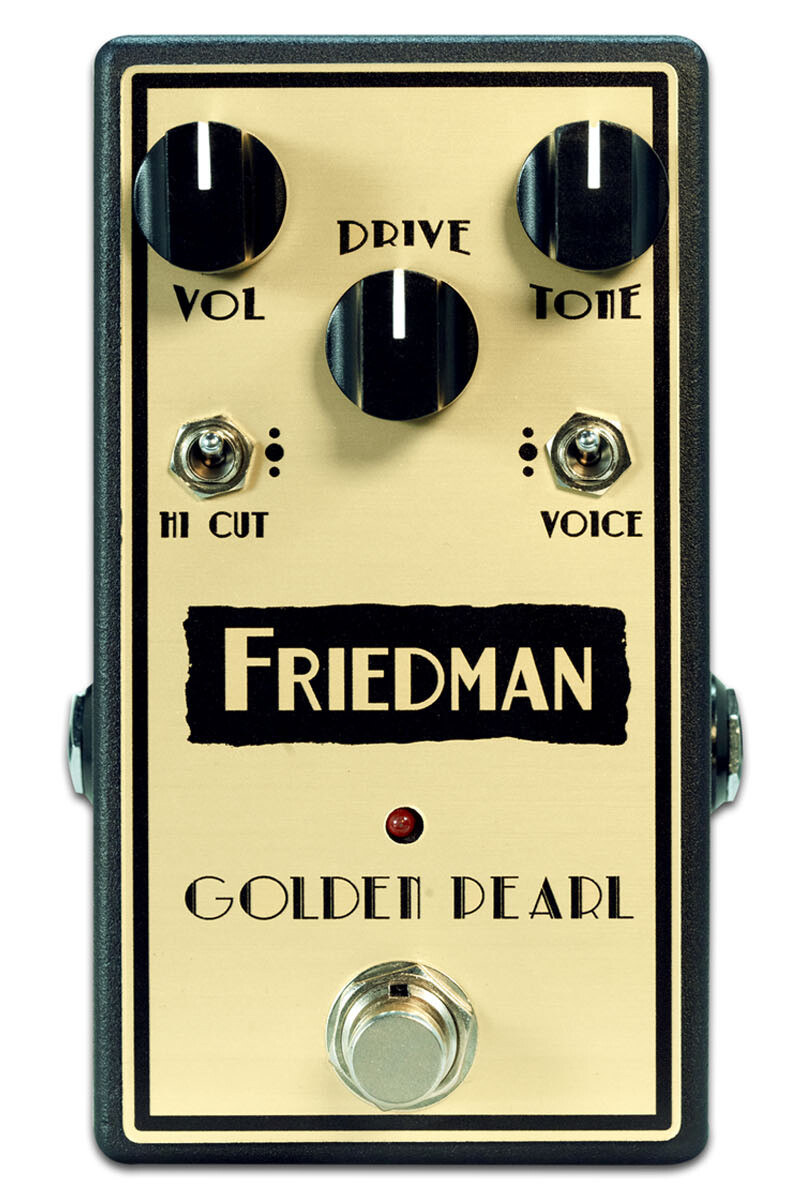 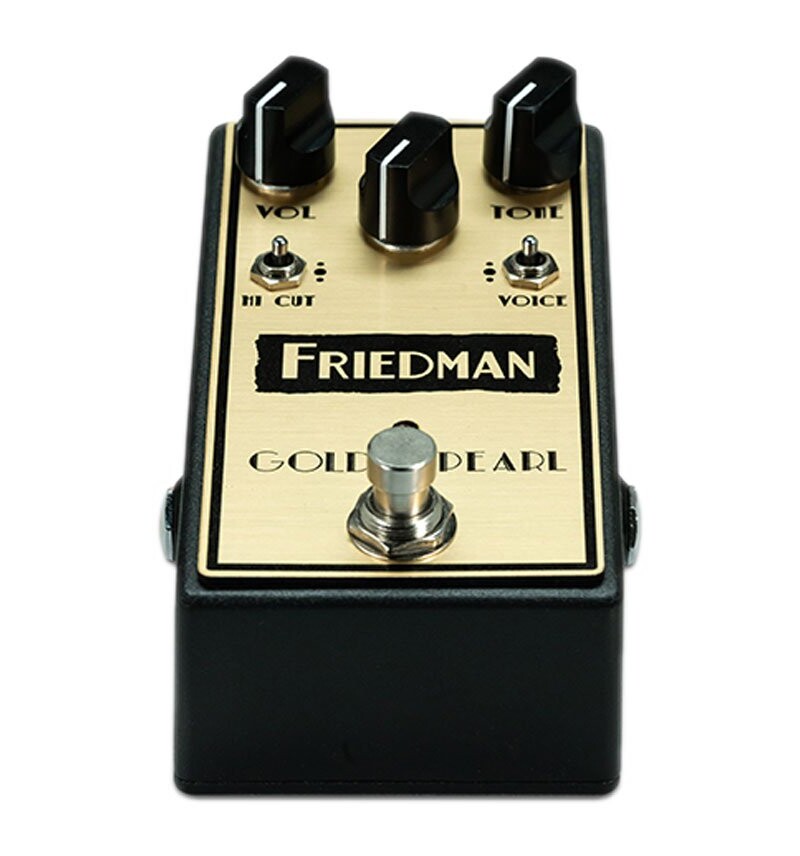