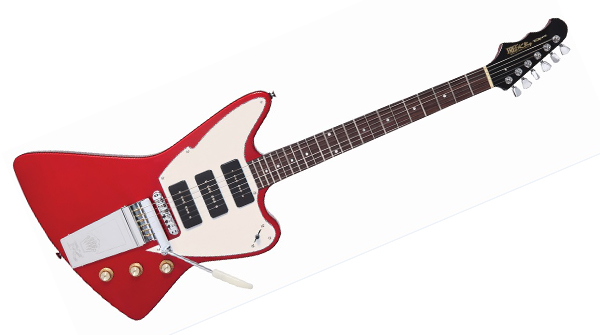 You may think you've seen it before - but you haven't! Fret-King's new Esprit III wraps a hugely capable guitar in a familiar Rock 'n Roll form. Rick Graham is intrigued...

Trev Wilkinson, the driving force behind Fret-King, is a name that I'm pretty sure most players will already be familiar with. Having started out doing custom paint jobs on his friends' guitars in his spare time, it didn't take long before he gained an intricate knowledge of the construction of the instruments, due mainly to the countless hours he spent taking them apart and putting them back together for painting. One thing quickly lead to another and in the early '80s, Wilkinson made the decision to start constructing guitars on a full time basis. It didn't stop there though: a gifted engineering designer, Wilkinson developed the revolutionary 'Roller Nut', which was subsequently picked up by Fender and used on its Strat Plus models. From then on hardware created by Wilkinson found its way onto models made by some of the most well known companies in the guitar world - and indeed it still does. But Wilkinson has his own ideas beyond just hardware and is also the brains behind various guitar brands including Italia, Vintage and now the subject of today's review, Fret-King. The specific model we had on loan was the brand new Esprit III. Let's take a closer look at what it has to offer.

The Fret-King Esprit III forms part of the company's  Black Label range. On first glance, you'd certainly be forgiven for mistaking it for a very well known model from elsewhere, due to the distinctive, asymmetrical body shape, but look closely and it's really not the same at all. While we are on the subject of the body, Fret-King has opted for a three-piece centre block of agathis, which is a remarkably heavy tonewood. I had never played a guitar with an agathis body, so I was very eager to hear it in action.

The Esprit III sports a long tenon set-neck construction, with a maple neck on which lies a rosewood fingerboard. The reverse headstock with six-a-side, in-line machine heads give this guitar a very cool look indeed. For the electronics, we have three stacked Wilkinson WP90s, which are claimed to give the Esprit III a huge range of core sounds. There is a master volume and a master tone control with an additional Wilkinson Vari-coil, which allows each of the stacked pickups to be rolled progressively back to single coil operation. The Wilkinson vintage '60s 'Long Tail' vibrato and the Wilkinson roller bridge finish off what is a very distinctive looking instrument. Let's check out how the Esprit sounds!

I couldn't resist diving in head first with the Esprit III so I dialled in some moderate gain and let rip with the stacked bridge pickup engaged. The resulting tone was nice and bright, without being harsh, and delivered tons of character and attitude. I was keen to hear how the Vari-coil functioned, so rolled it off to activate the single coil sound. I particularly liked how it was a more subtle change rather than an instant, noticeable one that you would have with a flick of a switch. Great design!

The neck position also sounded really very nice indeed, with a sumptuously full, classic sounding tone. Again, it was remarkable how well the Vari-coil functioned when rolling it back to single coil operation. Both the 2 and 4 'out of phase' positions sounded great and can be beefed up by bring the Vari-coil back in. Check out the video because you really need to hear this to appreciate how good it is!

It doesn't take long to realise that the Esprit III is a seriously versatile instrument. I have been so blown away by the sound that I've not mentioned playability but ours arrived perfectly set-up and really needs no comment beyond that. Moreover, the Fret-King's tuning stability was exceptionally good as was the intonation thanks, in part, to the Wilkinson designed roller bridge.

The Fret-King Esprit III is an exceptionally versatile instrument. With the superb Vari-coil system, it's possible to get a whole host of different sounds with relative ease and the minimum of fuss.

And, not just any old sounds, either. The tones that came out of this guitar were superb and it's clear that it's an instrument that has been made with the kind of attention to detail that Trev Wilkinson

is famous for. The only downside for me was its weight, thanks, no doubt, to the choice of agathis. That said, it delivers tonally and you can't have everything.

The clincher, for us at GI Towers was the price. This is a professional class guitar capable of a variety of sounds that far surpass those of a traditional equivalent. If they are all as well set-up as this sample (and we see no reason why they won't be) one or two rivals might want to start looking at their QC procedures, too. Our Editor insists on adding that he thinks it looks fantastic in red, though you can also have it in white or blue. Oh yes, and it even comes with its own dedicated carrying bag. It's just great value for money and a fine guitar.