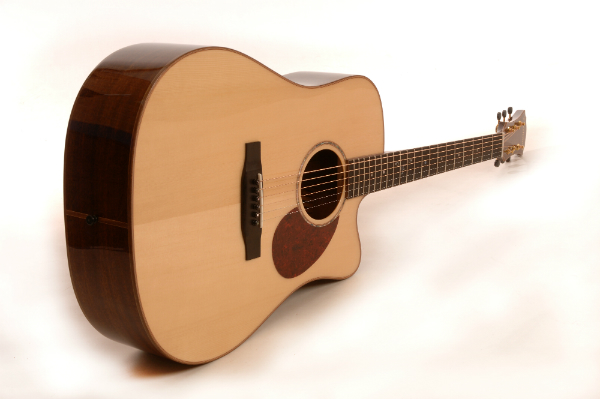 Freshman is one of a handful of small, independent guitar brands that realised the untapped potential of the mid-priced acoustic guitar market early on. When it launched back in 2002, the Glasgow-based concern was a refreshing breath of fresh air thanks to its range of carefully spec'd instruments that proved how even a relatively inexpensive acoustic guitar could offer high levels of build quality, playability and tone previously unheard of in this highly competitive price range. It took on some of the big names of the guitar world and, frankly, beat them at their own game. These are qualities that have elevated Freshman to the ranks of the UK's most successful acoustic brands.

The Freshman 600 series on the other hand is an interesting progression for the brand because it marks the company's first venture into the ratified atmosphere of high-end acoustic guitar manufacturing. The 600 series currently comprises three instruments: the FA600 DCE acoustic/electric dreadnought reviewed here, which is accompanied by two electro/acoustic Grand Auditorium models, the non-cutaway FA600GA and the cutaway model FA600GAC.

So why did Freshman feel that it was time to venture into the high-end acoustic guitar market, a sector dominated by prestigious US and Japanese names?

"The 600 series is a deliberate evolution for us," Freshman's owner and designer, Sean Kelly, told me. "We want to prove to people who might be in the market for a high-end boutique acoustic guitar what Freshman is capable of doing in terms of quality and tone. The 600 has come from two years of design, experimenting with different materials. We wanted to do something different that offered a different variety of sounds compared to the more traditional Sitka spruce and mahogany. The 600 series timbers are sourced from the same supplier used by many high-end guitar companies and in this case we have chosen quilted mahogany back and sides married with a Carpathian spruce top; a combination that we believe delivers something quite new and different in terms of tone. It falls somewhere between rosewood and mahogany."

The FA600 DCE is essentially a fairly traditional Dreadnought style guitar that is enhanced by a lower cutaway allowing the player to fully exploit the potential for playing all over the neck afforded by the built-in LR Baggs iBeam active preamp. We'll get into the amplified sounds shortly but viewed purely as an acoustic guitar in its own right, the FA600 DCE makes a seriously good impression. Freshman guitars have always stood out thanks to their very clean build quality and the FA600 DCE is no exception. The all-solid construction sees a combination of quilted mahogany back and sides mated to that Carpathian spruce top, braced using a traditional 'X' pattern utilising high quality quarter-swan spruce. The level of craftsmanship is as evident internally as it is on the guitar's exterior; there is no trace of glue marks, poorly secured ties on the bracing or any other sings of sloppy workmanship; even the internal kerfing, where the top, back and sides meet to form the guitar's body, is absolutely flawless.

Spruce is usually a fairly conservative-looking timber and in this instance the Carpathian spruce demonstrates a fairly standard appearance for its particular species. The two-piece top is mirror smooth with an understated but no less immaculately consistent grain pattern, buffed to a lovely honey-toned sheen with a very smart-looking mother of pearl soundhole rosette forming a subtle but nonetheless elegant centrepiece.

What a stark contrast, then, with the stunning quilted mahogany back and sides! Quilted mahogany is a pretty unusual choice of timber for an acoustic guitar but in this instance it looks very bold and highly attractive, neatly offset by some beautiful walnut and maple binding running around the full circumference of the joins between the top, back and sides, plus the neck/body join. The high level of attention to detail continues on the neck heel itself, which features a walnut cap inlaid with a gold Freshman signature 'F', which is echoed by a laser-cut mother of pearl 'F' inlay at the 12th fret and mother of pearl dot fingerboard inlays.

The characteristically slender mahogany neck reflects Freshman's standard neck pattern, which is a fairly slim 'C' profile, and in this instance the ebony fingerboard is trimmed with walnut edge binding that extends all the way to the distinctive Freshman headstock, where a 43mm bone top nut marks the point where a thin strip of maple/walnut trimming helps to finish everything off very neatly. Finally, down at 'tother end we find an ebony bridge features a bone saddle and ebony bridge pins with precision-cut mother of pearl inlays.

This level of build quality is thankfully reflected in this electro acoustic Dreadnought's tone, which proved to be a very versatile platform for fingerpicking and flatpicking styles. Freshman is understandably excited about the new combination of timbers used on its 600 series guitars and once strummed, you can begin to appreciate why. Sean Kelly claims that the quilted mahogany/Carpathian spruce combo used on this series aims to capture a blend of the warmth and drive of mahogany with the detail and clarity of rosewood and it seems that he is right on target!

The FA600 immediately delivers the classic 'oomph' and projection that hallmarks the dreadnought design but the low end sounds much tighter and less boomy than you might expect from a typical dread. Indeed, even when strummed fairly vigorously (as on you can see on our video) the FA600 DCE's low end stays very focused with a very well balanced tone that doesn't overpower the upper register. The treble frequencies also sound crisp yet sweet-sounding, there is none of the harshness at the top end that you sometimes get when you play a dreadnought with a flatpick and the FA600 DCE generally feels like a really nice guitar to play, especially thanks to its slim and very forgiving neck profile.

Plugged in via the onboard LR Baggs active iBeam preamp, the FA600's broad dynamic range allows the player to switch between a flatpick and fingerstyle without any sense that the guitar has suddenly switched personalities. Want a bit more power? Just dig a wee bit deeper and the guitar responds to the player's touch, with the pre-amp providing a virtually seamless reproduction of the guitar's natural acoustic tone. This is certainly one of the most natural-sounding and transparent onboard acoustic pickups that we've heard and while it takes a little while to get used to the single rotary volume control located just inside the soundhole, it nevertheless proves to be a very reliable and great sounding system.

So, has Freshman overreached itself in shooting for the top slot? In a word 'no'. Despite the 600's high price, it is still great value for money. Sean Kelly puts it this way: "The wood we use comes from the same sources as some other manufacturers whose guitars cost over £4,000!" All we can say is: it shows. This is a handbuilt quality guitar at a near mass-market price.

For its sheer build quality and excellent sounds the FA600 DCE definitely makes a successful argument for justifying its price tag, something that is even easier to appreciate from the moment that you pick it up and play. It may not be an investment (at this point in history, it's too early to say what Freshmans will be worth in decades to come) but if what you are after is a fine guitar at this sort of price, this is a good place to start. It may well be where you end-up, too.