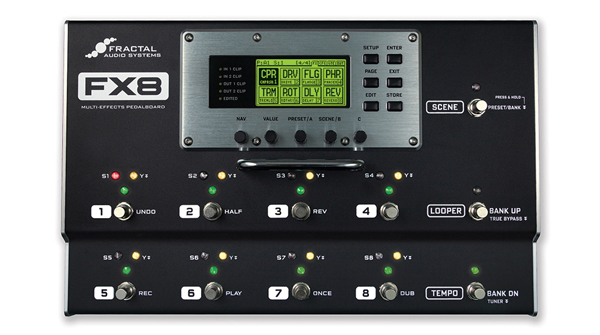 With its Axe FX II rack processor, Fractal Audio has truly reached the pinnacle of amp modelling with the best and most highly revered amp simulations and effects processing on the market right now. However, the company realises that not everyone wants, or enjoys, modelled amps and many people are very much tied to their beloved tube amps for the base of their tone and are using traditional pedal boards for their effects. Enter the FX8 - a high quality floor unit featuring the amazing FX algorithms of the Axe FX II and designed from the ground up to be used in conjunction with tube amps.

The FX8 is a relatively compact floor unit with 11 multifunction footswitches, five dials, six buttons and an LCD screen housed in a bomb proof steel chassis, complete with aircraft aluminium side panels and a metal carrying handle. Every component has been chosen either for its tonal qualities or to keep costs down so that more money can be put into the tonally significant components. Saving money by not using an HD, colour touch screen for example means that money can be put into better converters and circuitry and it’s obvious that Fractal’s goal here was to get the ultimate tone preserving FX unit for use with high end tube amps. To this end you get flagship, transparent converters, true bypass and buffered operation, 'Humbuster' outputs for eliminating ground hums, a circuit design optimised for running effects both in front and in the loop of an amp using the four cable method and totally silent switching thanks to solid state footswitches. The unit uses the same DSP chip as the Axe FX II for generating its effects, combining with the high end electronics and circuit design to make this the most high spec floor based multi effects processor on the market by quite some margin.

The FX8 can run up to eight simultaneous effects at a time in each preset. Looking at each preset as a virtual pedal board, Fractal also offers up to eight scenes per pre-set where, with the press of a single footswitch, you can turn multiple effects on and off, switch between an alternate X and Y setting per effect and perform utility functions such as channel switching on your amp or sending MIDI program and control data via the midi ports on the back. Each scene can be thought of as a particular ‘state’ of your pedal board, with certain pedals on or off and this makes switching between sounds incredibly fast and simple. The effects on offer are vast in their range with all the usual time and modulation effects plus an array of modelled drive pedals, wahs, compressors, gates and expanders, EQs and Formant shifters. Many of the more common effect types can have two instances for even more variation and all effects can have an X and Y state per pre-set if required, allowing you to have for example a Tube Screamer and short room reverb for one part of a song and a higher gain drive and longer reverb for the next within the same effect blocks. Up to 128 presets can be stored, effectively giving you access to 128 unique pedal boards at any time.

The effects here are simply as good as it gets, with some of the best sounding delays, reverbs and modulation effects on the market. The Axe FX II has always been renowned for the quality of its effects algorithms, even by those that don’t like the amp modelling, and to have access to these in a floor unit is fantastic news for guitar players. There are far too many options to go through all of the effects on offer but playing through your favourite tube amp with this level of effects quality and retaining every inch of your original tone is an experience that every guitar player should have. The only slight caveat to all of this fun is that, just like the Axe FX II, you must watch your CPU usage as, while there is plenty of DSP on offer here, running multiple high quality reverbs will max out this power pretty quickly. However, during my week with the FX8 I only ran across this issue a handful of times and the differences between the high quality and normal quality reverbs are hard to hear through a guitar amp.

The I/O options on the FX8 are equally impressive, with multiple ins and outs allowing you to place the FX8 both in the front of your amp and in the FX loop at the same time using the Pre and Post I/O respectively. Known as the four cable method this allows you to then choose which effects are sent to the front of the amp - drives, wah or certain modulation effects for example, and which effects are sent to the FX loop such as delays and reverbs. Whilst other FX units allow this functionality too, the FX8 is the only unit on the market that has been designed specifically for this purpose, with circuitry designed to minimise noise and ground issues and the results are superb with no extraneous noise, hums or tone sucking.

The FX8 also has a pair of expression pedal inputs that can be assigned to almost any parameter on the unit and a pair of TRS based relay jacks for allowing up to four assignable relay switches to be sent for channel switching or any other relay based controls on your amp. Effects can also be run in series or parallel for even more processing options and the same, highly configurable ‘Modifiers’ section is brought over from the Axe FX II allowing all manner of LFOs, envelope filters and assignable controllers to be used with the effects for even more creative control.

Fractal have even included two Global EQs for the pre and post outs, a dedicated four minute stereo looper, high accuracy tuner and a USB port for dialling in sounds from your computer using the superb FX8 Edit software which is available for free from their website. Although dialling in sounds from the front panel is very easy and quick, the FX8 Edit software is a real pleasure to use and many will greatly appreciate its graphical interface rather than working from the small LCD screen on the unit. Knowing Fractal Audio you can also expect regular and free firmware updates offering even more features as the FX8 evolves. The Axe FX II has picked up so many of these upgrades that it is a very different unit to the one that was released a few years ago with way more features and better sound quality and you can be sure that Fractal will do the same with the FX8.

It’s not often you get to say this kind of thing with such certainty, but it’s easy to say that the FX8 is the most fully featured and best sounding multi effects unit on the market right now. It sounds incredible and allows you to keep every bit of your beloved tube tone whilst experiencing some of the best effects available. It’s also relatively affordable compared to the flagship Axe FX II XL+ and will probably have some of the other multi FX manufactures pretty worried. This is an essential unit to check out if you want the best effects on the market. The best of its kind? We think so.