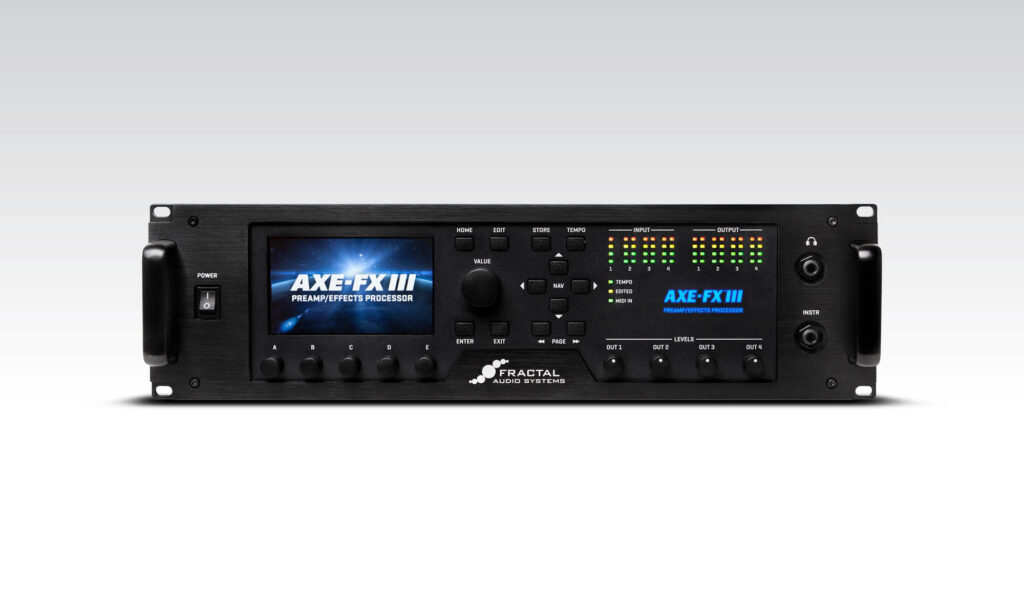 Most powerful modelling and FX on the market

With more than 260 amps, 2,200 cabinets and 220 effects, the Axe-FX III from Fractal Audio can provide the exact sound of almost any rig you can imagine or come very close to it. Could this be the most powerful amp and effects modelling product available today? Tom Quayle has the answers.

Let’s get the spoilers out of the way first – Fractal Audio’s Axe FX III is without doubt, the most powerful guitar processor ever created. Harnessing two 1.0GHz ‘Keystone’ DSPs, this latest flagship modeller provides more than twice the power of the Axe FX II whilst upgrading almost every possible hardware and software element that made the original so revolutionary upon its release.

The design of the Axe FX III has undergone some significant changes from its predecessor. It now sports a large, high resolution, colour screen, powered by a dedicated graphics processor to ensure that none of your precious CPU power is taken from your tonal creations. Utilising the tiny, monochrome screen of the original was somewhat problematic for many users and this high contrast, easy to read from any angle screen, is a massive upgrade that makes editing the plethora of menus and options on board a much easier, more intuitive and informative process. Of course, Axe Edit is still available and is superb for easily making amazing tones, but now you absolutely can cope without it and feel like everything you need is easily at your fingertips. Five push-encoders make for easy, amp like adjustments, whilst the front panel has been de-cluttered and simplified for more intuitive operation with less key presses required to achieve fast results. The display also now includes a fantastic metering page showing not only all your analogue I/O, but all USB audio connections too. Even individual effects blocks can now display their own metering levels for easily setting gain structure and diagnosing connection or clipping problems.

The 3u rack design allows the massively expanded I/O to be reflected on the front panel, with four dedicated output level controls and an expanded hardware LED metering setup. Despite the dramatic size increase (the AXE FX III now resembles a small amp head in size), the Axe FX III is surprisingly light weight and portable, whilst being supremely well built. The expanded I/O provides an unprecedented level of flexibility thanks to two auto-switching instrument inputs, one on the front, the other on the back, plus a further six balanced analogue ins and four independent, analogue stereo pairs for the output section. Input 2 features combi XLR and ¼” jack sockets, whilst outputs 1 and 2 provide balanced XLR outs for front of house, monitors or any other line level equipment. Outputs 3 and 4 are designed for unity gain scenarios such as ‘four-cable’ method or for running external FX pedals into the FX loop section of your signal chain. AES and SPDIF are provided for digital applications and the USB connection converts all of this into a high-end 8x8 audio interface with USB procedures all handled by a fourth dedicated DSP chip for rock solid stability. Finally, a pair of expression pedal ins, full midi capability and a dedicated FASLINK II port are provided, the latter allowing a single cable connection to the new FC-6 and FC-12 foot controllers.

To match all this impressive I/O capability, Fractal have ensured that the Axe FX III has the highest quality signal path of any product they’ve created thus far. Every component is of audiophile quality, providing the lowest signal to noise ratio and best sound quality, ensuring that your tones are pristine whether on stage or in the studio.

Of course, none of this would matter if the amp modelling and FX weren’t up to scratch and there are a lot of products in the market now that give the Axe FX III much stiffer competition than when the Axe FX II was launched. Fortunately, Fractal Audio have incredible form in this area and the Axe FX III takes the already superb ‘Quantum’ amp modelling from the II and builds upon it further with a brand new modelling engine, where almost every effect and amp model was rebuilt from the ground up to take advantage of the vastly more powerful DSP for this generation. The most impressive upgrade is just how touch sensitive and realistic the feel of this new modelling engine is under the fingers. Tonally we reached a point several years ago where modellers were hard to distinguish from the real deal, but the touch and feel remained elusive for many players. The Axe FX III improves a great deal in this area, especially for clean tones and edge of break up sounds where the touch and feel are so important to expression and being ‘in the zone’ with your playing.

The FX are unparalleled in terms of quality and sheer quantity, with a new 6x14 grid allowing for unprecedented levels of signal complexity and routing, no longer limited by CPU power, but only by your imagination. Even complex signal paths with two amps, cabs and multiple FX only see the CPU usage rise to around 50%, so processing headroom is no longer the issue it could be on the Axe FX II and AX8. This flexibility is further enhanced with movable input and output blocks that can be placed anywhere in the signal chain and the ability to place up to four instances of some effects into a given preset.

Each block within any of the 512 onboard presets can now have up to four channels, with each channel being a completely unique version of that block with its own parameters and settings. A single amp block could contain four different amp channels for a range of clean to dirty sounds for example, each with a different amp model and adjustment to any of the vast array of settings within that single block. A delay block might contain a tape delay on channel A, analogue delay on B, Shimmer on channel C and a 2290 style modulated delay on channel D. Multiply that by the 6x14 grid, over 212 fx sub-types, hundreds of amps, 2048 factory cabs, 189 legacy cabs and 2048 user cabs and you start to see that you could never even start to exhaust the creative possibilities.

The new speaker cab block allows you to mix up to four IR’s together, based on Fractal’s popular Cab-Lab software for even more tonal flexibility. The 2048 included cabs include all the usual suspects, but you’ll now found room mics, rear cab mics and cabs from famous artists such as John Petrucci and Chris Broderick included.

Of course, you still get all the modifiers and scenes functionality that made the Axe FX II so powerful, allowing you to control almost any parameter with onboard LFO’s, ADSR curves and even Step Sequencers plus the incredible level of product support that Fractal have become known for. The Axe FX II had over 29 firmware updates in its life cycle and the Axe FX III has already received several major updates since launch with new features and amp models regularly added for free.

Considering the incredible level of power, flexibility, ease of use and built quality here, the fact that the AXE FX III costs around the same as a single boutique amp head is staggering and whilst it’s a considerable investment for any guitarist, the value proposition here is quite remarkable. This is the most powerful modeller out there and, if you can afford one, it will give you incredible results for years - your imagination will run out of ideas long before it struggles to keep up with you. 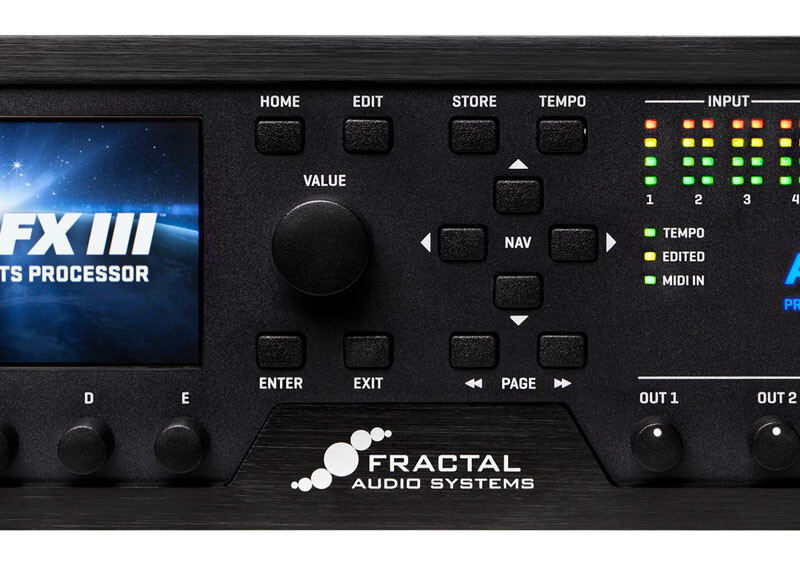 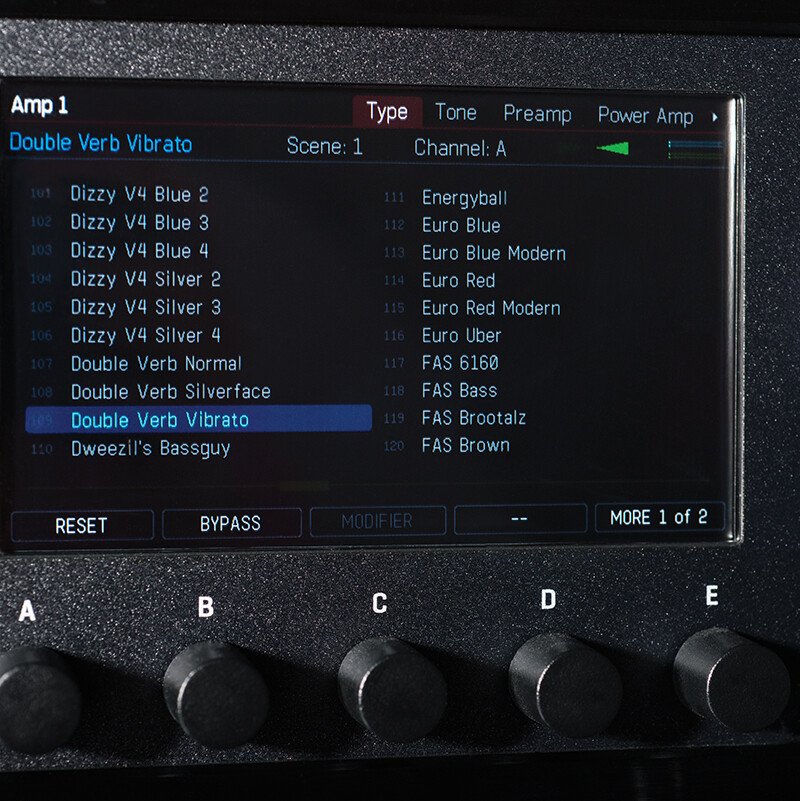 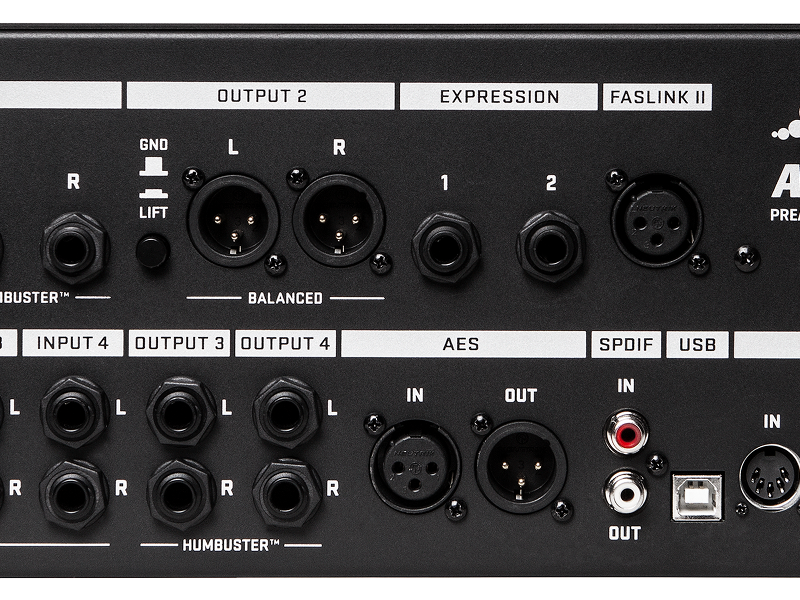