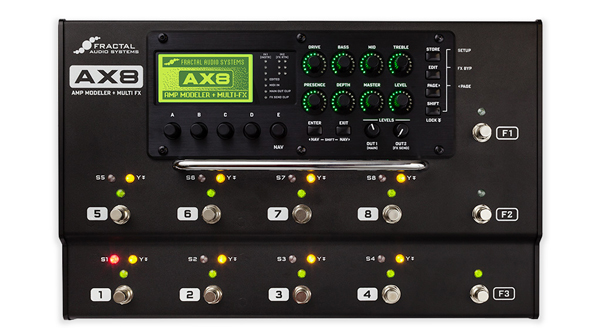 In recent years Fractal Audio has been one of the brightest stars in the guitar tech industry, producing amp modelling and effects units that have defined the high end sector of the market and been the choice of many of the biggest names in the guitar world. Fractal recently released its first ‘effects only’ floor based unit in the form of the FX8 and we gave it a glowing review in this very magazine (see GI 38 - Ed), so when we heard that the company was producing a second floor-based unit combining both the amazing ‘Quantum’ amp modelling technology and studio-grade effects from their flagship Axe FX II product, we simply had to check it out!

The AX8 follows the same design principle of the FX8, with a compact but highly sturdy steel chassis and aircraft aluminium side panels. The top features eight high quality, non-latching footswitches with three status LEDs each, plus three assignable function switches and an extensive control panel with five parameter dials and, crucially, eight LED-ring, rotary controls for Drive, Bass, Mid, Treble, Presence, Depth, Master and Level of the amp model. These instant access controls allow for an ease of use that is unparalleled on Fractal’s other products and makes tone tweaking a breeze from the front panel.  A small LCD screen and various soft-push buttons allow for detailed editing and utility functions. Ins and outs are just as extensive with dual input and outputs (the second in and out can also function as a stereo/mono fx loop) featuring both XLR and jack connections, four external controller pedal ins, S/PDIF out, USB connection and midi in/out/thru ports. The ¼” ins and outs feature Fractal’s proprietary ‘Secret Sauce’ and ‘Humbuster’ technology respectively for the best signal to noise ratio possible.

The AX8 boasts over 222 different amp models and over 130 cab models, plus the vast majority of effects from the Axe FX II. Due to the greater DSP power of this flagship unit, the AX8 allows for just one amp model at a time (as opposed to the Axe FX’s two) and only one instance of certain, more DSP-heavy effects, but considering the price differential, the AX8 is remarkably powerful and retains an impressive number of the features from the Axe FX II. On-board effects include all manner of reverbs, compressors, delays, EQs, choruses, phasers, flangers, rotary, tremolos, pitch shifting, wah and more. All of the effects can be controlled externally or by the onboard modifiers such as LFO’s, ADSR curves and sequencers that can be assigned to a huge number of different parameters for almost limitless creative possibilities.

Presets are arranged as blocks in a virtual signal chain, where the FX and amp/cab blocks can be placed in any order as desired with four rows for signal paths as complex or simple as needed. Each block in the signal chain can then be assigned to one of the eight footswitches to switch that block on or off in a pedalboard style format. Every block can have both an X and Y state, allowing for example two amp settings within the same block to create a two channel setup, one say for a sparkly clean tone and the other for a high-gain lead tone. Holding down the assigned footswitch will move between the X and Y states, allowing for even more tonal possibilities from a single preset. Within a preset, certain combination of effects and X/Y states can be stored as scenes with up to eight scenes per preset that can be assigned to any of the eight footswitches. This allows the user to switch on a delay, reverb and flanger for example with a single footswitch, rather than having to press each effect on/off individually.

Having the flexibility to set the eight footswitches up in so many ways allows the user to set up the AX8 in the most useful way for almost any scenario and the footswitch assignments are stored on a per-preset basis. Up to 512 presets can be stored, along with 512 user cab slots for uploading custom cabinet impulse responses. The three function switches can be assigned to a wide array of functions including preset and bank selection modes, calling up the inbuilt looper, tap tempo or selecting the tuner for example.

The amp models and effects are truly stunning in use and remain consistent with Fractal’s industry leading technology from its other units. Amp modelling simply doesn’t get better than this and the touch, tone and response are every bit as good as the Axe FX II, the class leader in its field. The range of effects is superb with beautiful delays and reverbs plus all of the modulations and drives you could ever need. The sheer range of amps and cabs on offer is astounding, with constant firmware updates providing new ones on a pretty regular basis, plus general improvements to existing models, effects and the user experience. Fractal is not known for resting on its laurels and is constantly improving its products after launch via free software updates.

The signal flexibility is every bit as good as the Axe Fx II, allowing the user to output a fully simulated signal from output 1 and a cab sim free signal from output 2 for example, or to run the dry, amp and cab only signal through out1 and all the FX through out2. Fractal has even developed a lovely, free software editor with a great graphical interface called Ax8-Edit that allows users to create tones via a connected USB cable on their computer or laptop. It’s very easy to use and controls every function of the AX8 including preset and user cab management.

Fractal’s Quantum amp modelling and Ultra-Res cabinet simulation represent amazing technological achievements. To have them combined with the effects from the Axe FX II in a compact floor unit of this quality and at a pretty affordable price is really amazing for guitar players and represents something that many people have been asking about for a long time from the company. Now it’s here the AX8 is every bit as good as guitarists could have hoped for and will be something of a game changer for many players out there who need a compact, gig ready solution with everything in one unit. Superb.