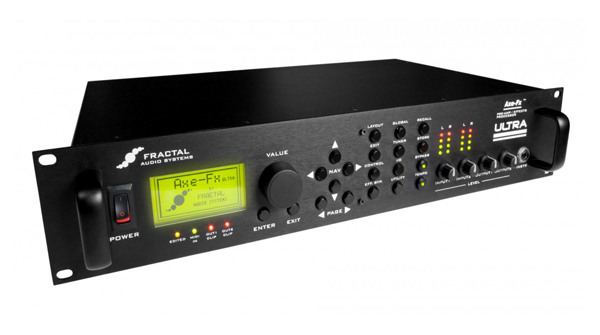 Fractal Audio's original Axe FX modelling pre-amp and processor was so ground-breaking that it created its own cultural following that included high-profile users from Steve Vai to John Petrucci. It became the desirable product that everyone aspired to own. With the Axe FX II, Fractal claims to have bettered their original design. Can they have achieved the seemingly impossible?Tom Quaylefinds out. And loses his mind in the process...!

If you've never heard of Fractal Audio and the Axe FX pre-amp/processor then where have you been over the last few years? One of the most successful product releases in recent memory, the Axe FX was originally released in two forms: the Standard and Ultra models. Used by many famous players, these two models have now been superseded by the new Axe FX II model, claimed to be far more powerful, with a whole new set of features and sounding better in every respect.

The Axe FX II is basically a very high-end digital modelling pre-amp and effects unit with dual DSP chips for incredible amounts of processing power. The first DSP chip powers all of the amp modelling and the second is dedicated to FX. Featuring hundreds of new amp and cab models, the unit uses Fractal's all-new G2 modelling technology to model pre-amp and power amp tubes in impressive detail. New 'Virtual Vacuum Tube' technology creates a dynamic model of a vacuum tube for realism, complexity and response, matching the real deal, and the G2 technology also models the entirepower amp including the tubes, transformers, choke, filter caps and more. This level of complexity allows for the most impressive modelled tones I have ever experienced, with amp models sounding and reacting just like the real thing.

The modelled cabs are all based around Impulse Response technology (IRs) - essentially a sample of an actual cab and mic combination stored in an onboard file. IRs allow for far more realistic cab sounds that are identical to the real thing and since the cab is such a huge component of any guitar tone, getting this right is essential for modelled tones. The Axe FX II even allows you to create IRs of your own cab/mic combinations, using the onboard Cab IR capture utility. Being able to capture the tone of your own cab and use it anywhere, be it studio or stage, is a fantastic addition and works superbly in practice. To complement the IR capture function the Axe FX II also has a Tone Matching feature, allowing the unit to match a preset to a reference signal from a mic or recording. This allows you to match your sound to your favourite artist, simply by playing their tone into the unit!

You can basically think of the Axe FX II as being a modeller hooked up to a studio level FX processor, as the unit includes a whole array of superb quality effects built-in. Amp models and effects are arranged in blocks on the edit page and can be arranged in any order you like, with up to four signal paths at once. The level of control on offer for each effect and amp model is obscene as every parameter imaginable can be edited with precision and ease. This is a tweaker's delight and it would be impossible to exhaust the possibilities. Effects on offer include: Overdrive, Distortion, Fuzz, Wah, Whammy, Chorus, Flanger, Phaser, Tremolo, Univibe, Delay, Reverb, Harmonizer, EQ, Compression - and this is only scratching the surface as each effect type has a large number of sub-models on tap, to allow for even more creative expression. In use, the effects sound incredibly pristine and realistic - this really is as good as it gets and the sheer number of options on offer is mind-blowing.

To add even further control, the Axe FX II includes what Fractal calls 'Modifiers'. These modifiers are controllers that can be mapped to many of the parameters for amp and cab models or effects. Two LFO (Low Frequency Oscillators) and two ADSR (Attack, Decay, Sustain and Release) curves are included, allowing you to create time-based changes to effects or amps and parameters which can be mapped to a huge array of external controllers such as expression pedals, switches or continuous rotary controls, including the four rotary 'ABCD' quick controllers that are on the front panel of the unit.

Fractal also makes a dedicated controller called the MFC-101 (for which there is now a dedicated input on the back of the Axe FX) for direct control over all the available parameters. In use, these modifiers allow you to create sounds that are totally unique to the Axe FX and allow for a huge amount of creativity, inspiring you to look for the next new sound.

Onboard ins and outs have been vastly upgraded from the original unit, with professional-grade, balanced and digital s/pdif and AES in and outs. A dedicated headphone out (missing from the original unit) is very useful and allows for superb practice tones late at night. The unit can be used direct into a desk, soundcard or PA, into a power amp and monitors/guitar cab, into the FX return of an existing amp or direct into the front of a guitar amp. The greater processing power even allows for combinations of set-ups or multiple configurations at the same time, allowing you to run a signal into your amp whilst having a different configuration running to your in-ear monitors on stage. This sonic and logistical flexibility make the Axe FC II very attractive for the gigging musician, as well as the recording artist.

Onboard USB connectivity allows the Axe FX II to act as a soundcard with two inputs and four outputs, sending audio direct to your DAW for recording as well as the dry signal for re-amping at a later point. MIDI is also sent via USB, allowing the unit to be controlled via a DAW or by Fractal's impressive, free, computer-based editor - Axe Edit. This software makes editing patches even easier with a great and well thought-out visual interface allowing you to develop new sounds in a very practical way. Patches can be saved to your hard drive for future uploading to the Axe Fx II, or saved from the Axe Fx to your computer for future editing. The Axe FX II also includes an on-board back-up utility via a flash ROM, so if you lose all of your patches mid-gig you can recover them without needing your computer. It would seem that Fractal truly have thought of everything!

One of the greatest aspects of the Axe Fx II is Fractal's dedication to firmware updates. The original Axe Fx was updated over 11 times during its lifetime and the Axe Fx II has already been updated a number of times since release. I was lucky enough to get my hands on the beta release of the latest update for the review and the new drive pedals and other features on offer were very impressive.

In use the Axe FX II sounds incredible, with easy patch editing, even at the deepest level. Creating patches from scratch is as simple as selecting your amp model and cab, adding effects and then getting creative with modifiers. The possibilities are literally endless. The modelling is phenomenal and has reached the stage where it is almost impossible to tell the difference between modelling and real tube amps. Just watch the video review to hear examples of what's on offer. We were lucky enough to borrow Matrix amplification's demo Axe FX II for this review, which they use to show-off their fine power amp to the best advantage (see our Matrix review in this issue) and together they really do make a superb combination. To have all of this power, flexibility and control in one rack unit is insane and I am seriously tempted to drop all of my other gear in favour of this unit - it really is that impressive! (steady-on, old boy! Ed)

No doubt this is an extremely expensive piece of kit, but to buy all of the amps, cabs and effects to get this level of flexibility would cost an absurd amount of money, so in fact you certainly get what you pay for here. With the added attraction and excitement of future updates from Fractal and a support network of dedicated users and developers exchanging sounds and patches, the Axe Fx II might just be the most exciting guitar product out there right now. Amazing - congratulations Fractal.