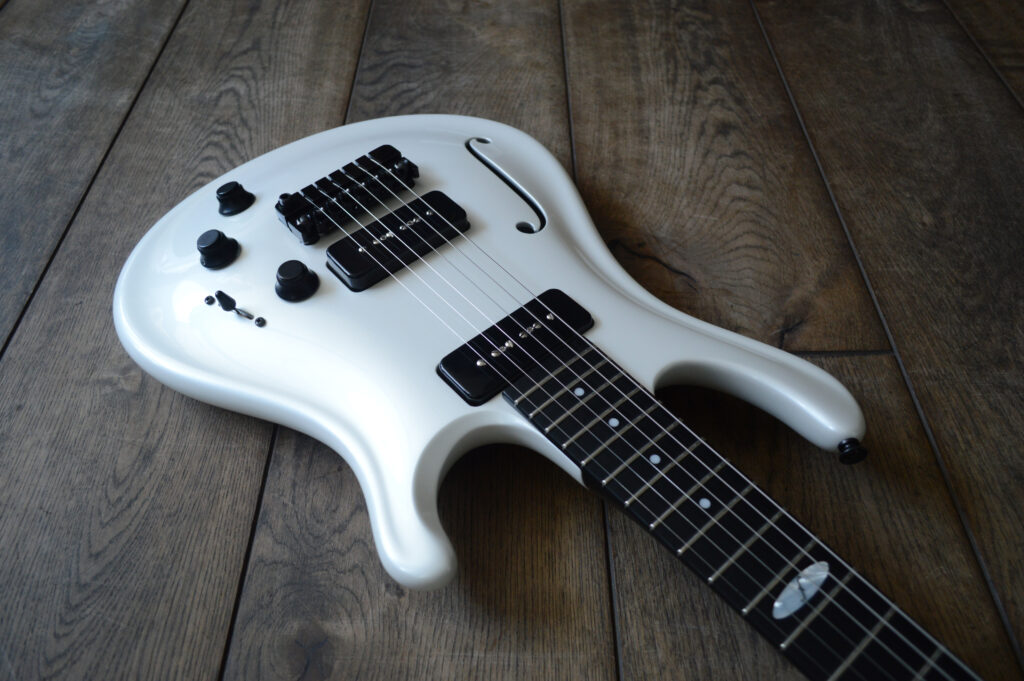 The Flaxwood is completely hollow and thanks to its contours was super comfortable, feeling small and unobtrusive.

Ugly Screw on 'resonator' board on the back

Concern about the use of tropical hardwoods reached a peak early this year with the introduction of controls on supplies of rosewood. This is not likely to be a passing fad and it is certain that other woods will wind-up on the so-called CITES list before long. Which makes the drive to move away from traditional guitar tonewoods all the more urgent. Cue the innovative composite bodied Flaxwood range, which has been around for a few years now, vying for attention. Has its time finally come? Lewis Turner checks out the fine looking Liekki.

Getting to play lots of different guitars is cool, but let's face it most are based around a few tried and tested construction techniques, using materials that have been employed for many years. There are good reasons for sticking to tried and tested materials and techniques, not the least of them being that  using a new material, or even slightly different shape, can be met with a few raised eyebrows. Guitarists just don’t like change! Well, that's what we're in for here - and how! Flaxwood is a Finnish company that has developed a waste wood fibre reinforced thermoplastic material which can be injection moulded - even into the shape of a guitar's neck. Flaxwood guitars have been around since 2005 and have generated a reasonable amount of interest without having set the world on fire. Is that about to change?

As I said when I reviewed a plastic topped Supro in GI not long ago, resin guitars are nothing new and I used to own a very nice 'plastic' Ibanez that was perfectly pleasing to the ears, so why are these different materials quite often not given the time of day? Do they really sound different? Or is it just snobbery and lack of understanding that makes guitarists turn their noses up at the idea? As always be sure to check out the video to see and hear it for yourself, and make your own decision.

Visually, you would be hard pressed to find anything to object to about the Liekki. Pulling it from the case, it looks cool - very cool! From the headstock to the fretboard markers everything is just a bit different and unique, but never odd. There are lovely contours on the body with a striking F hole. Ours was finished in a very clean white adding to the sleek look. It was also light, and if you have ever read any of my other reviews then you will know that I think this is a good thing, back saving aside, light guitars just sound better... (ducks for cover from a flying Les Paul..).

The Flaxwood neck is fitted with what I took to be a rosewood fingerboard but, as you might expect, that turned out to be made from Flaxwood too. Either way, it was a pleasure to play. At a 12” compound radius, 25.5” scale thin C shape and 22 X-Jumbo frets it felt comfortable and effortless.

A nice big cutout for the lower horn and a 3-D glued neck joint made upper fret access a breeze, the set-up was spot on, nice and low but there wasn't a trace of fretbuzz or intonation issues. It's clearly set up as a shredtastic guitar and it does that job very well.

The Flaxwood is completely hollow and thanks to its contours was super comfortable, feeling small and unobtrusive. Flip it over and things start to disappoint a little in the looks department, however. Screwed to the body is a resin resonator backplate that just strikes me as ugly. Presumably due to the fact the guitar is hollow they needed to add something to prevent feedback and keep its strength and this is what they came up with. On the Flaxwood website there is an FAQ which sets out to explain why the resonator plate is there but I didn't feel it really explained it. In any case, look on the website and I bet you will be hard pushed to find a picture of the back and once you have seen it (it's shown in our video) you can understand why.

But does it work? Well, we didn’t really run it at any great volume in our studio plus the amp is in another room, although the PA speakers are pretty close, I didn’t have any issues during this review with feedback, but you would have to live with it for a bit in real life to see if any issues crop up.

Our Liekki was fitted with a Schaller LP tremolo and Gotoh tuners keeping everything stable and in tune. The trem was great and could probably take a fair bit of abuse. This set-up makes it a lead player's dream because you can really dig in, scoop, dive etc. with no concerns about things going out of tune, the same being true for Yngwie style vibrato and bends. Once the strings are bedded in, this thing is as stable as anything.

The Liekki uses two Seymour Duncan SP90-1 Vintage soapbar humbucker pickups with a three way selector switch. These are great and further reinforce this guitar's intentions. The bridge pickup is bright and cutting, whilst the neck is mellow and scooped for smooth lead lines and a mixture of the two gives you a fairly decent clean tone. As an overall tonal spectrum this guitar has a bit of everything and will suit many styles. The hollow body with F hole gives a fairly decent warm Jazz tone on the neck pickup, too, while the bridge enables a smooth scooped lead tone. I'm loath to say the word but it’s a bit of a 'Fusion' guitar!

So what about the Flaxwood and its effect on tone? It sounds fine and I don’t think I could tell in a blind test against a 'normal' guitar. It perhaps lacked a little mid-range scoop but that could be down to the lack of density. So it doesn’t sound any worse than the norm, but it also doesn’t produce a whole new tonal spectrum that blew my mind, so that inevitably raises the question, why do it? Well, the makers claim it's impervious to moisture and that can be a good thing, especially if you are travelling across all sorts of climate zones. But the main reason has to be if you are particularly concerned about playing a guitar made from a wood which is considered 'endangered'.  In the end, no reviewer can help you there - it is a purely personal decision. Of course, in time you may not have the choice, but for now you have and it's up to you.

Ignoring the material for a moment, this is a very good guitar that looks (apart from the back), plays and sounds great, comes with superb hardware and really is just a very nice guitar indeed. It has a fresh feel and look about it that will turn heads. It's perhaps a shade expensive but you really have to judge it not against mass produced guitars but specialist built ones because that is the class it's in. If you’re in the market for something a little different and unique, go give one a spin. 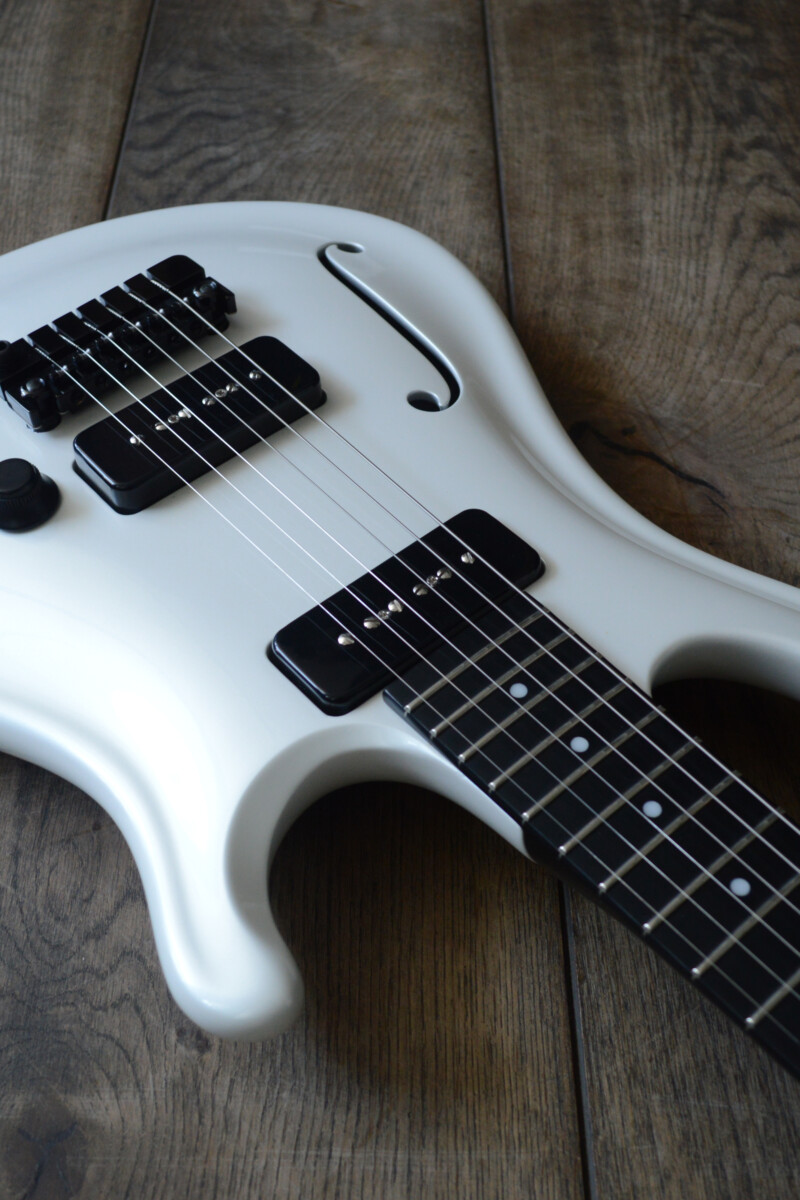 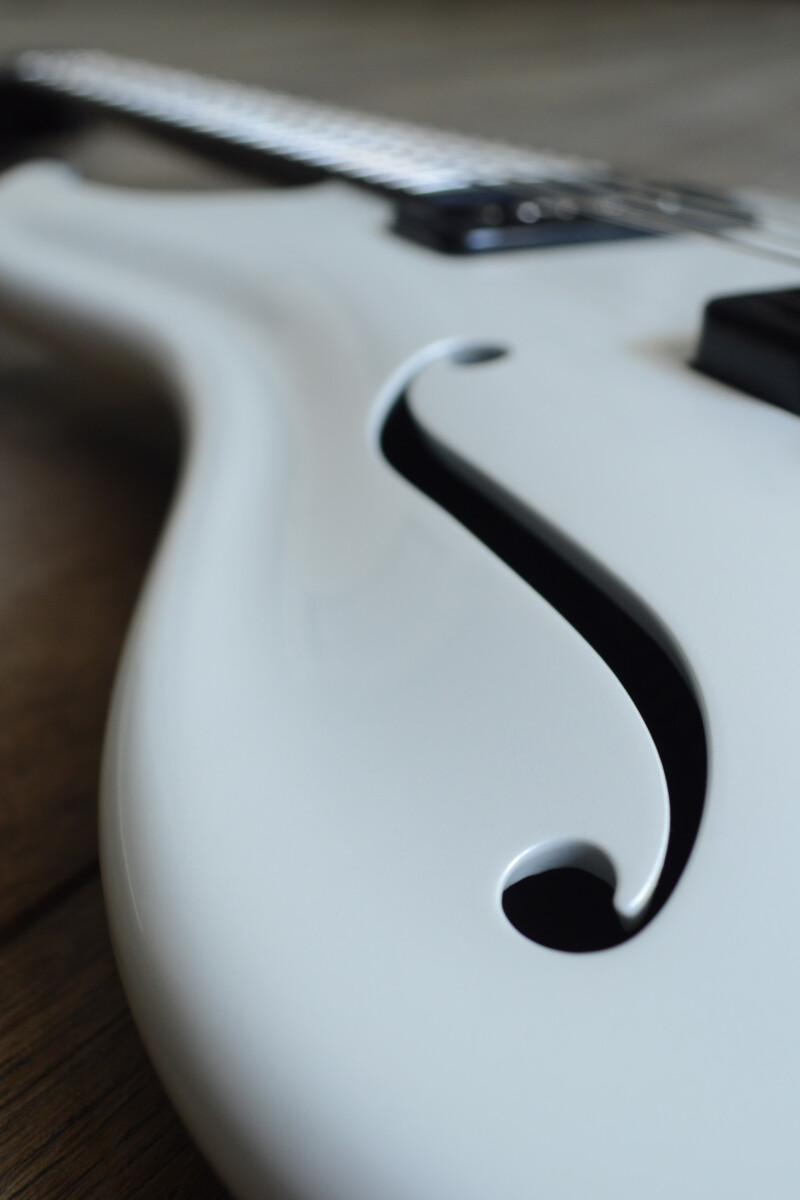