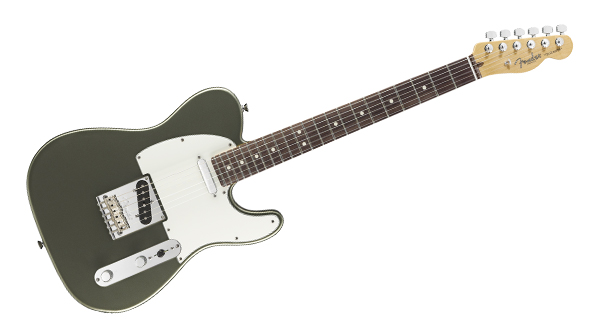 It's the granddaddy of them all - and yet it's still going strong: Fender's immortal Telecaster. But how good are the current versions and does Leo's first thought still stand up to modern demands? Rick Graham gets analytical.

Having been rocking the world now for over half a century, the guitar that makes up one quarter of Fender's classic quartet of instruments, the Telecaster, has seen a variety of changes over the years - some successful, some less so. The most recent occurred in 2008, the most notable of which was the inclusion of a six saddle bridge, veering the Tele into a more Strat-like territory and which, according to Fender. was not just for intonation but also offered a much improved and less compressed sound.

For 2012, the six saddle bridge remains firmly in place but this time round they are placed on an open sided brass bridgeplate. It also features longer string slot holes in the bent steel saddles to ensure and easier transition and placement of the strings. Other features new for 2012 include a new ribcage contour shaping as opposed to the standard 'plank' like shape of older Teles, which for some will come as a very welcome upgrade, and the addition of new custom shop Fender pickups. In the bridge position is a 'Broadcaster' pickup and in the neck position sits the 'Twisted Tele' single coil, which was formulated in Fender's custom shop but has now found itself as being a part of the American Standard Tele series.

The neck has a much slimmer profile than some Tele die-hards will be familiar with, adopting Fenders 'C' shape and as a consequence will feel a little more modern, or dare I say it, less vintage, a sense complemented by a flatter radius of 9.5 inches instead of 7.25 inches. Couple that radius with the medium jumbo frets and you have a very playable guitar with a slightly more modern feel.

There is also 'behind the nut' truss rod adjustment access and on the four screw neck plate you'll find the micro-tilt neck pitch adjustment system, enabling quick and easy adjustments compared with those on vintage Fenders.

But is it any good? In action, it is quite simply stunning! While it's true that I have a soft spot for Teles generally, there's no doubt in my mind that the benchmark Fender originally set for American built instruments remains exceptionally high.

The first test, as always, as a quick burst unamplified and, as you would hope, the Telecaster was really resonant - though a little brighter than some I have tried in the past. The intonation was absolutely spot-on, meanwhile, and the playability was a breeze and somehow still seemed to retain that classic feel, even with the more modern upgrades found on this version.

Plugged in, the bridge pickup offered all of the classic Rock tones that Teles are so well known for and the 'Twisted Tele' in the neck position always sounded nice and full, with an addictive warmth to the tone but with plenty of attitude too. That said, the neck pickup did sound a touch brighter than I'd expected, giving rise to a more Strat-like tone, while still being unmistakably Tele, if that makes sense! Check the video and hear for yourself.  The new ribcage contour felt great too and as mentioned before and will no doubt be a very welcome upgrade for lots of Tele fans.

In summary, I am finding it extremely difficult to come up with anything I didn't like about the new American Standard Tele. It is quite simply a superbly well made instrument, which while easing in a more modern direction still sounds, plays and feels so good that it just couldn't be mistaken for anything else.