So, really, what we have here is a pretty archetypal Fender Telecaster, with all the twang and honk that we expect from this style of guitar and with some nice touches that bring it right up to date.

Another year, another Telecaster. But is there really anything left to do to a Telecaster that hasn't been done before? Sam Bell thinks there is and that Fender has pulled it off again.

I think it’s safe to assume that most Guitar Interactive readers are familiar with Fender's iconic Stratocaster and Telecaster guitars. The Tele, the older of the two of course, was a bold and basic design for one of the first ever full production electric guitars and has gone on to become a trusty workhorse for musicians in many different styles of music since it first appeared. But having been around for so long and having received countless makeovers, both by Fender and the many other guitar firms that have borrowed from Leo's original idea, you can't help wondering, what can there be left to do that could possibly improve this legend?

Well, it seems Fender has gone back to the drawing board and taken the Telecaster's workhorse status as its starting point. The company has come up with a guitar which succeeds the previous American Standards, renames them American Professionals and does actually have some useful and enjoyable features, while still retaining the classic qualities which any Tele player is going to be looking for.

We borrowed a handsome Sonic Grey version from retailer DV247. Ours came with a rosewood fingerboard and if this is what you want (as opposed to a maple neck version) our advice is to get in quickly as the 2017 changes to the international CITES regulations on the importation and use of rosewood look like making this a scarce commodity in the future!

The first thing worth mentioning about this Telecaster is its newly improved bridge. I enjoy the classic Tele 'ashtray' designs but they can get in the way of your palm when palm muting and your fingers when hybrid picking. Both of these very important techniques and also heavily related to the styles of music that the Tele is often associated with such as Country and Rock. This new bridge is slightly more recessed around the edges, so it doesn’t get in the way. The saddles are also classic in design and appearance but this time they are made of brass, which apparently improves intonation and keeps the classic Tele twang sound intact.

Next up are the V-Mod single coil pickups which deliver higher outputs than regular standard Tele pickups, while still retaining the classic sound and upper end presence you'd demand from a Telecaster. They're controlled by a three-way switch, tone and volume knob which has been wired up with a treble bleed circuit. This is excellent for when players roll the volume back for less output and cleaner sounds. Traditional wiring usually means your top end can be lost when rolling the volume back, but the treble bleed circuit keeps that presence intact keeping the tone consistent and full even when reducing the volume. This is a good move and combined with the V-Mod pickups represents a serious attempt to deliver traditional Telecaster sounds in a modern and very usable way.

The neck has also been modified slightly from the classic design, with a Deep C shape designed for comfort when chording without getting in the way for more technical speed based playing. Single note and chord playing is a breeze with this neck making it very versatile for many styles. The neck is also adorned with narrow tall frets that help aid intonation when climbing up the neck it also aids bending slightly.

So, really, what we have here is a pretty archetypal Fender Telecaster, with all the twang and honk that we expect from this style of guitar and with some nice touches that bring it right up to date. Fender is to be congratulated for not doing to its guitars some of the horrible things that a certain other American guitar maker has been doing in recent years - turning them into instruments they are not!

Our sample was well made and well finished and came with a lightweight moulded case, which is always nice to have included in the price. Ah, yes...price. At least in the UK, this isn't a cheap guitar - especially not for one which is, let's face it, about as rudimentary as an electric guitar can get. We actually considered docking half a point off our rating because of this but in the end decided that it really is far too nice an instrument to warrant that - but we do wish Fender would take a look at this pricing issue. Still, even at a pro price it's a pro guitar, so perhaps that's fair enough. 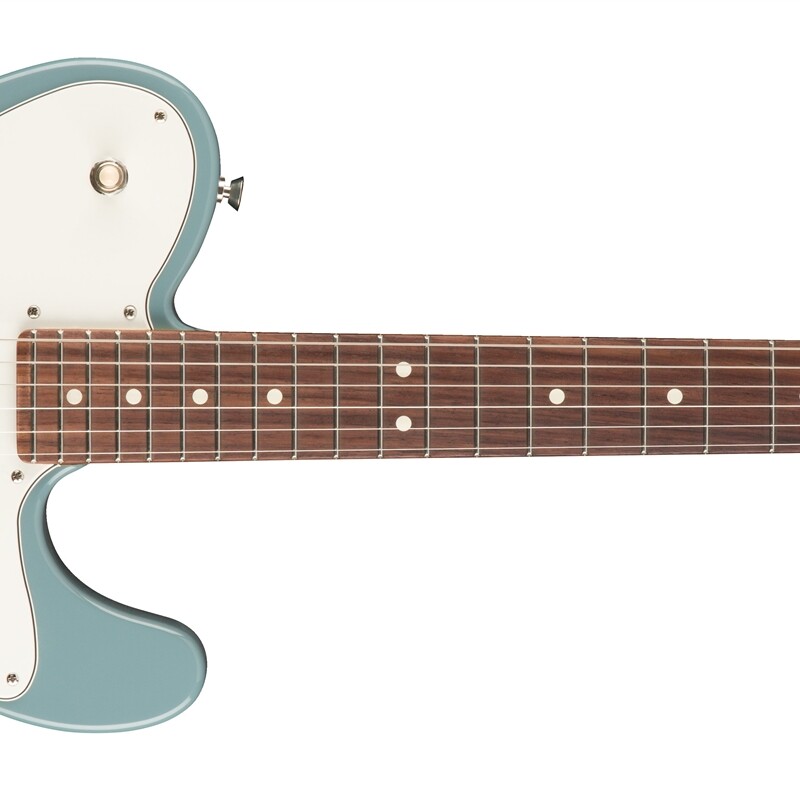