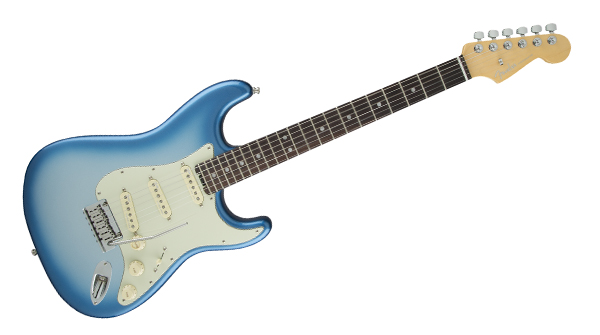 For me, and a lot of you out there, the Fender Stratocaster is the definition of an electric guitar. Even the guitars I use that aren't strictly Stratocasters are basically superstrat versions of Leo's original design. The guy got it right first time and it surely has to go down as one of the greatest iconic designs in modern history.

I own a lot of Stratocasters from different eras and it's always interesting to check in with the latest versions to see how the guys at Fender are tweaking the already near perfect design to sell to each new generation of players. Maybe the first thing to mention is the modern looking paint jobs Fender is doing nowadays. The high end USA Strats are coming out in some great colours that really 'pop' in the light due to having a subtle metal flake in the paint. These main colours for the American Elite series include a warm looking 'Autumn Blaze' which is like a metallic orangey red, and our review blue guitar colour called 'Sky Burst Metallic'. As pretty as a solid colour guitars can look, it can easily hide a series of wood sections glued together to make one whole body, which eliminates waste in both wood and profits. In theory there is nothing wrong in this practice and all the major manufacturers do it, but I prefer to know what I'm buying and for me a guitar with a translucent finish that shows off its grain is far preferable. Solid colour Strats are generally made of alder, as our sample was, which is a very plain looking wood, so this is another reason to finish it in a solid colour, but still, under the paint, the body could be one piece or three or four pieces glued together, we just don't know. Also sometimes, if a guitar is finished in a thin coat of nitro cellulose, you are able to pick out composite joins in the wood with very close inspection, but mass produced guitars such as our Strat Elite, are finished in the tougher polyester finish that gives a deep looking lustre to the paint and a very tough coat that doesn't mark or scratch easily. Nitro is much more costly and labour intensive, but it's a pretty much accepted fact that a guitar ages, it breathes and resonates better when it's not entombed in a thick jacket of poly. So if you are a young player looking to spend substantial money on your first Fender, it's wise to consider the pros and cons to a translucent over solid and nitro over poly finish.

All that aside, our review sample (which came to us having been around the houses a bit, judging from the ding it had received) had average to pretty good resonance which means the pick ups can do their job easier when it's plugged in.

The pickups fitted to this model are the fourth generation Fender noiseless type. Fender's noiseless pups were the replacement for the Lace Sensors used on high end Fenders from the late '80s to the late '90s. For me the early first generation noiseless pick ups missed the mark by a long way and were a poor replacement for the incredible sounding gold Lace sensors that came on the flagship Strats previously (probably a third of my album was recorded with a Strat loaded with gold Lace sensor) but these '4th Generation Noiseless' pick ups do sound good and are very traditional in tone, with the added advantage that they are dead silent, which for me is a huge plus on any modern Strat.

The Elite comes with the fantastic S1 switching which on a Strat gives all sorts of series or parallel pickup options and opens up a whole world of tones, not previously available on Strats. The S1 switching has been around since the early 2000s and although Fender has changed what it does a little over the years, it has always been an impressive option to have on a Strat.

The back of the neck goes from a C profile at the bottom, to a D at the top, and is very comfortable in the hand. We had a rather anaemic looking rosewood board on our guitar, with comfortable medium frets that all combine to make the general feel and playability in use excellent.

This Elite plays really well and seemed set up nicely by anyone's standard. The contours on the back of the body have also been tweaked and are apparently deeper, but I'm not sure anyone had any issues with the contours on Strats from previous eras, did they? Likewise, Fender now uses a soft-touch material for the control knobs. Some players may like this, some may not and some may not even notice.

It's good to see a two post trem on a modern Strat rather than the vintage style six screw trem. If you are serious about utilising the tremolo in your playing, then the two post version is the only way to go. Even with me giving the guitar my usual trem abuse, tuning was very stable and problem free. The arm was the push in type with a grub screw on the block to keep it nice and tight. This is a better design than the more common screw in type bar that can flop about and knock with tiny amounts of slack. All Strat players have little tricks to get round the slack on the screw-in trem arms, which generally means tiny high tension springs in the trem hole or bits of tape or heat shrink around the thread of the arm. Fender has never got this absolutely right, why, I just don't know! I can't be the only Strat player in the world that finds the hit or miss fitment of the screw in trem arm really annoying! The push in arm with the grub screw works well but how tough and hard wearing it’ll be as the years pass is another question.

All in all this is a great Strat. The two post trem, stable tuning, S1 switching and silent operation, single coils make it a serious guitar that could cater to the needs of any experienced pro player or novice alike. Any regular Strat is an expressive and versatile enough guitar in the right hands, but a Strat that's been 'breathed' on like this American Elite, is certainly a fine instrument to own and play.