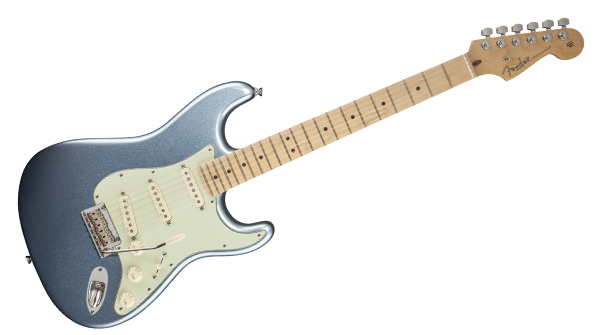 I think it's fair to say that there are few (any?) more famous guitar names than Fender, and that the Fender Stratocaster is probably the most iconic guitar shape of all time. This means there's no need for an introduction to this company or of the Fender Strat in general, meaning we can get straight down to the nitty gritty. An American-made Fender Strat has probably been the desire of most guitarists at some point. My first guitar was a Squire which I loved, but the moment I managed to get my own US Strat (and a Custom shop one to boot), my quest for the perfect guitar was complete, and I thought I would never need another..... Several years on, I now have many more guitars from various manufactures, but that US Strat still takes pride of place and is my go to guitar. I'm basically a Strat man and am always trying out various ones both old and new, so I was particularly pleased and excited to be assigned this review.

Since the birth of the Stratocaster players have been hell bent on modding them. Changing pickups, altering wiring, removing paint from various areas, scalloping fretboards etc have all been carried out on Strats around the world and written about many times. So wouldn’t it be great if you could change the sound of your Strat without having to take a soldering iron to it? Enter the Strat Plus!

The Strat Plus is essentially an American Strat with a trick up its sleeve, in the form of easily interchangeable “personality cards” that instantly give you a wealth of versatile pickup and circuitry configurations. It comes with three cards, which are very quick and simple to change. Just open the flap on the back of the guitar pop one out, and pop a different one in, five seconds max to re-wire a Strat!

The American Deluxe Strat Plus features fully solder-less electronics that literally make circuit mods a snap. Here are the cards that are included and what they do. I strongly advise you watch the video so you can hear how they sound, and I go into more detail about each of them.

Standard: Gives you a standard Strat sound, with the 5-way pickup switch working as you would expect.

Blender: Tone 1 = Master treble cut. Tone 2 = Blends in the neck or bridge pickup depending on the position of the pickup selector switch.

This is all cleaver stuff, and this reviewer can't explain how it actually works, but it does! So how does it sound and play?

Let's start by looking at the actual guitar as if it were a standard Strat. As you would expect build quality and finish were exemplary throughout. Our sample was finished in a cool Mystic Ice Blue with a maple fingerboard. Locking tuners are a great addition and the two point floating bridge was set up perfectly. There are a couple of new features (aside from the electronics) on this guitar. The neck has a “modern C profile” making it a little thinner and less like a bass ball bat, and with medium jumbo frets it makes the neck a breeze to play.

Another important feature is the addition of Fender's 'Noiseless' pick ups: three N3 single coils. This is a subject that divides the Strat community. The fact is that traditional single coils produce a massive amount of hum especially on the neck and bridge position. Some say this is endearing and part of the charm. I say if noiseless pickups make my recording life less hassle by not have to worry about hum, then bring on the N3's! Noiseless pickups have come on a long way. Early systems, whilst reducing the hum, would also reduce your tone and output giving you a very weak sounding instrument. I'm happy to report that there are no such problems with the N3 pickups. All the traditional Strat tones were there, minus the hum.

Moving on, the alder body resonates well and offers plenty of tonal dynamics, matching well with the maple neck. However, it is quite a weighty guitar. I have a couple of Strats and they vary massively in weight, the heavy one is the same wood combination as this one, and I have to say when it comes to a long gig I will opt for the lighter one. This model could be carrying a little more weight due to the additional electronics.

You want to know if this card stuff actually works and brings anything to the party though don’t you? Well, in short it does. I was a little sceptical at first. Being a hardcore Strat fan I didn’t want it to take anything away from the inherent tone of the guitar and its classic sounds, and it doesn’t: it just adds to it and gives you more options. Many Strat-like guitars now come with HSS (humbucker, single coil, single coil) set-ups as people want/require that option of a little more “grunt”. However, those set-ups sacrifice those beautiful second position out of phase tones that Strats are so famous for. With this guitar you can have both in a matter of seconds.

Theoretically, this could be the only guitar you could ever need, offering all the tone possibilities you could think of. That won't of course be the case, because no amount of electronic wizardry is every going to make a Strat sound like a 335 or vice versa, as those tones go a lot deeper than just the electrics. The Blender card was pretty cool, but other manufactures have offered that with concentric tone pots and the like, for me it was the Cutter card was a winner and a very impressive one. Once again please check out the video as I go through each one in detail.

You may well now be thinking that all this technology is really going to hurt your wallet, well it's not cheap but its in line with American Strat and custom shop prices for a standard version, so hopefully the asking price won't be that much of a shock.

I could see this guitar having so many benefits on session's/gigs, rather than taking an array of instruments for different sounds, just this and a selection on cards could do the job, changing cards is quicker than changing to a different guitar. It's not going to replace extreme tones that different types of guitar offer, but for some of the more subtle tonal changes this does the job. It's not a gimmick, it's a great guitar that offers so much more than you initially think and will serve you well.