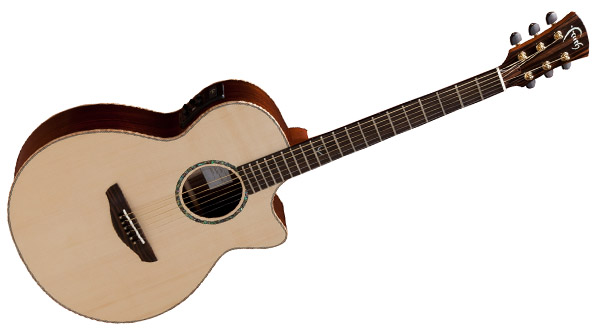 Faith's acoustic and electro-acoustics have consistently impressed us. Faith is in the vanguard of the new wave of acoustic guitar makers, challenging the long-established brands by offering superb instruments at great prices. But as the top end of the Faith range starts to approach the lower end of the 'big name' brands, can it still keep its edge? Rick Graham sampled a hex pickup equipped Faith Venus and came away looking very thoughtful.

I can't help but be impressed when I see a good looking guitar and Faith's Venus certainly falls into that category. With its attractive high gloss lacquer finish and beautiful flamed maple binding, it's most definitely a head-turner. The wood of choice for the top, and in fact the top all of Faith's guitars, is solid Engelmann spruce, picked mainly for the crisp, clear tone that it is capable of producing, especially when paired with the right tonewoods for the back and sides. In this case, that wood is rosewood, which tends to give more natural power to both the low and high end.

That Faith should be going into such detail should come as no surprise. The brand is owned by one of the UK's longest established and most respected distributors and the company has retained Patrick James Eggle, one of the world's top guitar makers, to design and specify the range. Like the best of what our editor calls the 'new wave' of acoustic guitar brands, Faith isn't a cynical exercise whereby a distributor or big guitar brand owner goes to a Chinese factory, buys whatever is on offer and has its logo put on the headstock, Faith designs the guitars itself and then looks for the best factories in which to have them made. When it is got right, the result can be a very impressive instrument at a bargain price.

Back to this Venus. The mahogany neck is attached to the body by way of Patrick Eggle's own bolt-on design and the fingerboard is a piece of Macassan figured ebony. I particularly like the addition of the mother of pearl 'F' at the 12th fret as I feel it is in keeping with the level of class that the guitar exudes. The tuners are Grover Rotomatic Gold.

Importantly, you have an instrument made entirely of solid woods here. While it's true that having a high quality solid top is the most important element in determining an acoustic's performance, solid backs and sides are well worth having too, if you can afford the extra cost, and the choice of woods used here was exemplary. This really is a fine looking guitar and very well made!

On the face of it, all a hex system does is deliver an individual signal per string. Fine - that means you can trim the individual signals to suit your needs - but there is a lot more to it than that, should you chose to delve deeper.

The way the Shadow system on this guitar works, with the 'Pan' control fully over to the left, the output of the guitar is normal: mono output is transmitted through a
conventional mono guitar cable to your amp or DI box. However, with the 'Pan' Control fully turned to the right, the output of the guitar is operating in its Stereo  hex capacity. Now (and I'm quoting Shadow's own explanation here) "...the strings are separated across the stereo spectrum: the Low E is panned far left and the High E is panned far right with all other strings in relative positions across the spectrum. The stereo output goes through a stereo 'Y'cable which can be connected to two separate amplifiers, a stereo PA amplifier or 2 channels of a mixing desk etc."

Shadow adds: "This is ideal for widening the sound-field of your solo acoustic
performances, and a revelation for those who like to experiment with sound-layering, looping and multi-tracking."

Clearly, this is a facility which will appeal to some and leave others stone cold. The good thing is that you have the option - if a Shadow hex system appeals, it's an option - if not, you can save money and buy a still fabulous Faith without it.

In a performance capacity the Venus is a very impressive instrument. I played it acoustically for some time before plugging it in and the first thing that struck me was the fullness of the tone. The high and low ends balanced beautifully well, never overpowering one another at any time. This proved to be the case regardless of whether I was bashing out open chords or playing more delicate fingerpicked passages. But plugging the Venus in was really impressive and that Shadow hex pre-amp showed that it was able to bring out the best of the guitar with no compromise whatsoever. The signal was always very clean, with no audible noise at all. Even though it is a very well balanced guitar, I did experiment with the individual string volume controls via the pre-amp and it gave even more scope to refine the sound according to my specific taste. There's no doubt that it's great to have the ability to do that with some simple control changes.

Would we want to go further and use it for complex stereo set-ups for live performances? There was some debate about this. The traditionalists on the team were unsure but perhaps the Editor summed it up when he said "Whatever would the late John Martyn have done with one of these? Sooner or later, someone is going to take one of these systems and take the acoustic somewhere completely new. Imagine what you could do with MIDI or a complex effects set-up".

The Venus  FVGH-HEX is a very classy instrument. The build quality and attention to detail are top notch and the volume and tone reassuringly good. As for value for money, it all depends on what you want. If you can't see yourself ever taking advantage of that hex pickup system, then, clearly, this isn't the model to go for. And the choice is there in the Faith line-up. What you'll get then is an exquisitely made acoustic at a very good price. If, on the other hand, you are looking to expand your creativity, then there are few rivals to this extraordinary guitar. The choice is yours.