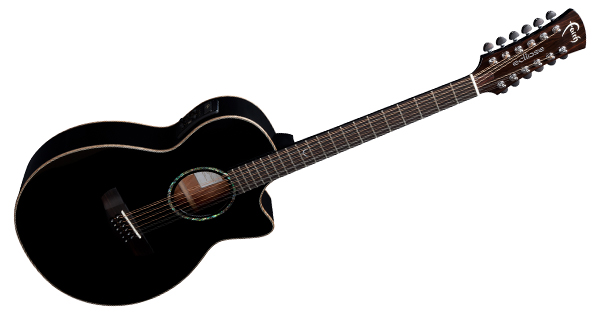 We're great fans of 12 string guitars here at iGuitar. We've also been consistently impressed by the quality of Faith's acoustic guitars. But will the Faith magic touch hold true when the company makes a 12 string? Rick Graham found out.

Having reviewed a number of Faith acoustic guitars in previous issues, I'm fully aware of the kind of quality that the company put into their products. The man at the helm of their design department is none other than Patrick James Eggle, who enjoyed considerable success during the '80s and '90s with his electric guitar designs and who has more recently become renowned as a maker of beautiful quality acoustics, as reviewed in iGuitar issue 5.

As well as creating his own handmade instruments, Eggle also oversees the Faith brand which, though mass produced in the Far East, has won unanimous praise from reviewers for its quality of design and manufacture.

In iGuitar issue 9 I reviewed a Hi-Gloss series concert guitar (http://licklibrary.ceros.com/iguitarmag/iguitar-issue-9-steve-morse-interview/issue9/page/192) and this time around it's the turn of the 12 string Venus version of the Eclipse series. Just like its six string counterpart, it features similar specifications and an onboard Shadow L4020 HEX preamp and Nanoflex 6 pickup, delivering a stereo output of really excellent quality.

Like all of Faith's current product line, the top is made from Engelmann spruce, mated, in this case, with solid mahogany back and sides which allow the guitar to deliver a more focused mid-range tone. The guitar looks visually stunning with the black high gloss finish. "With the Eclipse series, the black colour is actually part of base coating process, with a thin layer of lacquer applied on top. We never apply the lacquer so thick that it restricts the sound, rather we allow the thin layer of lacquer to sink into the grain of the wood a little, ensuring the wood is free to move sufficiently." Eggle says.

The wood of choice for the neck is mahogany upon which is a maccassan figured ebony fingerboard. I personally love the mother of pearl 'F' logo at the 12th fret which I feel adds a touch more elegance into the mix.

In action the Venus had a very robust and rich sound, full of subtle tones and nuances as a 12 string should be and with a great playability to match that sound. Though this isn't a cheap guitar, it needs to be borne in mind that it is by no means an expensive one, either and the quality on offer here is, frankly, in advance of quite a lot of  'major brand' acoustics  which can command far higher prices. Good value for money? You bet!

Amplified, the Faith comes even more into its own, thanks to the advanced onboard Shadow HEX system. As well as offering an onboard three band EQ with Bass, Mid and Treble controls, the preamp features a volume control, pan control, phase button, onboard tuner and perhaps the most important element: individual volume controls for each pair of strings. For acoustic players, there is nothing worse than an unbalanced sound between strings and the HEX system alleviates this issue beautifully with a simple turn of the rotary control. Couple all of these features with a pristine high quality output and you are ready to go in any musical situation - and thanks to the quality of the Shadow preamp, none of those characteristics were lost when we put it through our PA system.

The Venus never lost any of that beautiful richness when playing higher up the fretboard either and I'm talking 12th fret and above here, thanks to the great addition of the cutaway.

With any 12 string, an extremely important aspect to get right is the quality of the machine heads. I can't imagine many things worse than a 12 string that doesn't hold its tuning. It's bad enough with six, never mind 12! I can assure you that you needn't worry as, in this instance, the Venus comes equipped with high quality Grover Rotomatic tuners which do a sterling job of keeping the Venus nicely in tune.

The Eclipse Venus 12 string is another triumph for Faith Guitars. Everything about it exudes the high quality that the company is well known for and with this model, the addition of the HEX pre-amp really does make it a 'must try' for those of you looking to invest in a new 12 string.