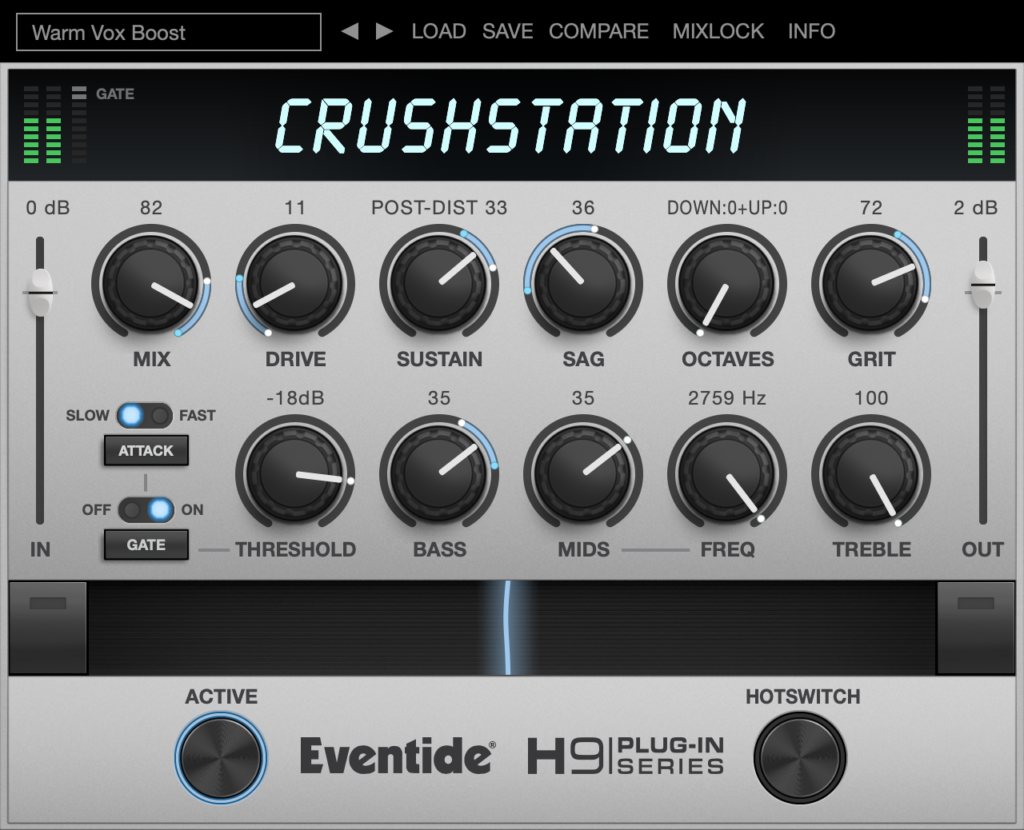 CrushStation from Eventide is a versatile, best-in-class, stereo distortion platform for your Mac, PC or iPad/iPhone. Its controls can drive your tone from creamy saturation to a brutal sonic assault, but distortion is just the starting point. Nick Jennison tells us more.

When it comes to cutting edge guitar tones, Eventide’s legendary H9 is still the best in the game. Offering a dizzying array of algorithms that cover everything from beyond-studio-grade reverbs and delays to wild combinations of filters, oscillators and saturation that stretch the creative limits of even the most imaginative guitarists.

Under Eventide’s watch, even traditionally simple effects like tremolo bristling with clever options for tonal tweakery (see our review of the Harmadillo algorithm for evidence of this). Crushstation is no exception. In the H9, it’s a rainbow of destructive distorted goodness capable of every colour of sonic mayhem imaginable: and now, it’s available as a plugin.

The highly interactive controls are key to getting the best out of Crushstation. Cranking up the drive control produces positively criminal levels of distortion, but the character of the dirt is dependent on where you set the “Sag” and “Grit” dials. “Sag” simulates the effect of lowering the voltage supply to the virtual gain stage: at lower settings, it introduces subtle intermodulations that add vibe and texture to the distortion, but as you crank it up it starts to collapse in on itself, becoming a beautiful sputtering mess at the upper reaches of the knob’s travel. “Grit” drives more low end into the input of the distortion, taking the sound from articulate and aggressive to thick and blown-out. Both controls are highly interactive with both the drive control and with each other, offering a near limitless number of textures.

The “Sustain” control is a grabby, chewy compressor that can act pre or post distortion, and the “Octaves” control dials in upper and/or lower octaves before the distortion - interestingly, the high octaves also have a degree of stereo spread that provides subtle widening to any source. Tone sculpting comes from a simple but powerful three-band EQ with low and high shelves and a fixed Q parametric mid-band, and there’s a simple but highly effective gate too.

Slotted into the signal path of a guitar track ahead of a software amp, Crushstation becomes basically a massively tweakable fuzz pedal - a corner of the guitar’s tonal palette that’s often neglected by plugin manufacturers. If for example, you want to beef up a high gain sound, try recording a clean DI alongside your core tone and processing it with Crushstation, then. Lend the two for some eye-popping results.

For processing other sources, Crushstation is every bit as powerful, thanks to the mix control. This allows you to blend in everything from warm saturation to sheets of devastating distortion while leaving your source completely untouched. For helping a bass guitar punch through a mix, blend in some aggressive drive with a little upper octave for width. For a lacklustre snare, the grit control will add weight while the dry signal will retain the transient snap, and a little lower octave can make for a truly larger than life thump. It’s not just single sources that benefit from this kind of treatment either: with the right balance of drive, mix and sustain, room mics and drum busses take on an explosive character, and it can even be used (with caution!) to add a lo-fi glue to your mixbus!

Crushstation is a hugely versatile distortion plugin that can add warmth, grit and weight to any source - or completely annihilate it in the most glorious fashion. Considering how inexpensive it is, you’d be crazy not to add this to your arsenal. Now go forth and cause mayhem!