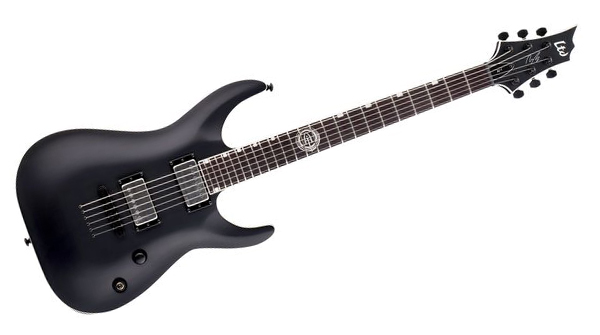 In our previous issue it was Tom Quayle with his signature Wampler pedal - this time its Andy James with his very own signature ESP LTD. Once again we asked Rick Graham to flex his fingers and give a fellow columnist's signature model a thorough workout!

Having established itself as a major force in guitars since it first appeared in Japan in 1976, ESP has continued to go from strength to strength, not only just in the superb quality of its products, but also in the popularity stakes due, in part, to a hugely successful series of signature guitars. A mere glance at ESP's artist roster and you'll be greeted by some of the highest profile names - particularly in the heavy metal scene. Guitar Interactive's very own Andy James has now become the latest ESP artist with a signature model and it is this very guitar - the ESP LTD AJ-1 that we have on review here.

For those puzzling over the difference between ESP and ESP LTD, the LTD brand was established in 1996 and guitars brandishing the LTD logo are manufactured in Korea and Indonesia as opposed the more expensive ESP branded instruments, which are manufactured in Japan. So having got that established, let's take a closer look.

The blueprint for the AJ-1 is essentially the LTD H401, which Andy has been using for a number of years for his axe wielding duties with his current band Sacred Mother Tongue, but, as you'd expect, the AJ-1 includes some modifications according to Andy's own specifications.

In essence, The AJ-1 features a mahogany body with a maple neck and has been made using a neck-through construction. What that essentially means is that there is a slab of maple, incorporating the neck, sandwiched between two pieces (or 'wings') of mahogany, which forms the body of the instrument. As a design principle, it's well established and is widely regarded as producing superb levers of sustain. The headstock is the design used for the LTD 'H' range of instruments, although for the AJ-1, Andy has opted for the reverse headstock, which I personally think looks a lot cooler.

In addition to the LTD locking tuners, the headstock itself bears the LTD logo and has Andy's signature emblazoned across the centre. I have to be honest, I never thought I'd come across another

signature which looks more illegible than mine! All joking aside, it does look very cool indeed. The AJ-1 sports a 25.5" double octave neck with XJ frets and a rosewood fretboard. The fret markers are offset and compliment the very cool and beautifully finished 'AJ' logo at the 12th fret.

look very cool indeed with their brushed steel finish and, in case you are shopping for new pickups, both are now available separately as replacements pickups from EMG. The LTD's electronics, meanwhile, are laid out with simplicity in mind and feature a single master volume control and a three way pickup selector toggle switch.

The bridge of choice is a TonePros Locking TOM Bridge and with its desperately cool black satin finish, the AJ-1 scores very highly indeed in the good looks and coolness department.

Soundwise, the AJ-1 certainly did not disappoint, either! I found the guitar to be a very resonant instrument and spent a good while getting acquainted with it unamplified, as I always do with any guitar. I normally expect a somewhat dark sound when playing mahogany body guitars but the AJ-1 had a very nice touch of brightness to the tone, perhaps attributed to the neck-thru maple construction.

Plugged in, the AJ-1 sounded fantastic and although at first I wasn't sure if I liked the sound of the pickups, after five minutes or so I settled into that sound very nicely indeed.

Make no bones about it, this guitar has some serious sustain with a very full and round tone but with the clarity you need to really cut through the mix. Playability was superb and our review guitar was very nicely set up indeed. I particularly liked the simple electronics layout and, for me, the position of the volume and toggle switch were perfectly placed.

The LTD AJ-1 is undoubtedly a very well made instrument with a ton of attitude and a sound to match and although it has been produced with the shredding fraternity in mind, I feel that confining it to just that area doesn't do this guitar the justice that it deserves. Sounds awesome, plays awesome, looks awesome! Check out the video then check out the real thing in a store.