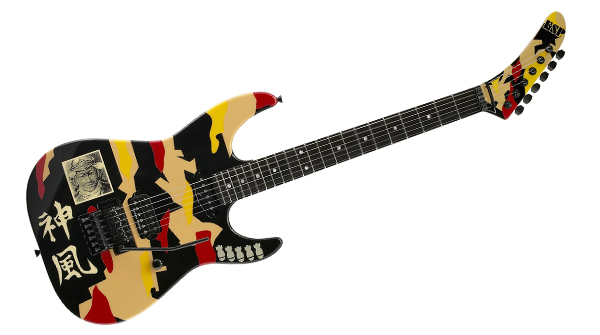 For more than 25 years George Lynch has graced the stages of the world with his trusty ESP signature guitars. Having recorded some of the most classic metal guitar of the '80s, '90s and into the new millennium with Dokken, Lynch Mob, and now with KXM, in this issue we honour Mr Scary by taking a look at one of his best loved guitars - the ESP Kamikaze 1.

In rock history there have been many guitar heroes and quite often as famous as the players are the unique instruments they choose to play. Zakk Wylde’s Bulls Eye Les Paul, Jimi Hendrix's Monterey Strat, Eddie Van Halen’s Frankenstrat, Steve Vai’s Floral Jem, Joe Satriani’s Chrome Boy, Nuno Bettencourt’s stripped down N4, and George Lynch’s Tiger Stripe and Kamikaze ESPs, among them.

George Lynch has had a very long and fruitful relationship with the ESP guitar company. He first became involved with it back in 1986. George himself stated that he wanted something unique and custom made, and was pointed in the direction of ESP, being told that they were the company to go to for custom made instruments. Over the years he has been associated with several different designed ESPs, his most famous being the Tiger, and also the “Wicked Sensation” Skulls and Snakes. But his original, and probably best loved, is the stunning Kamikaze graphic guitar, which was his first signature model. This guitar is available as a Japanese made ESP or as a cheaper LTD model and we were taken aback when ESP sent us one of the former to use in the Tech Session which you can also find in this issue. I say taken aback because this really is a special guitar - a stunning handmade master build, the work one of ESP’s top Japanese luthiers, who has handled the construction and finishing of this guitar through from start to finish, as all of these signature models have. The guitar comes with a certificate of authentication, so you know you’re getting the real deal and it also comes with a custom hard case.

The guitar is a superstrat style guitar, but very stripped down in terms of its controls. What you see is what you get with this guitar - a 100% shred machine! The most striking feature of the guitar is the reverse “hockey stick” style headstock, named so for obvious reasons and reminiscent of the non-reverse Kramer style from the early-mid '80s. The headstock features the Kamikaze graphic, matching the body and also the George Lynch signature. The neck is constructed from maple and is a bolt on type, with a George Lynch original U profile, with a 350mm radius. The fingerboard is very flat and fast, made from ebony, with 22 extra jumbo frets, so great for both speed and string bending. The guitar includes a locking nut and the neck joint is shaved so reaching the higher frets is not a problem. The machine heads are Gotoh and are finished in black, matching the rest of the hardware.

The body is pretty big, and is made from a solid piece of maple, so it’s pretty heavy. But for the sake of some extra weight you gain lots of sustain, and acoustically you can really hear the guitar resonate. The bridge is an original Floyd Rose and features a screw barrel around the bar to hold it in. I’ve had bad experiences with these in the past, either the bar held too tight to make it operate, but it's fixed in the way, or too loose to do anything with. But my fears were quickly allayed when I tightened in the arm, and found I was able to move it around, or keep it fixed in one place, as well as flick to produce gurgling sounds: this really is a great bridge!

Our sample guitar featured two Seymour Duncan pickups; a single coil in the neck and a George Lynch “Screamin’ Demon” in the bridge but we believe that ESP's most recent examples are now being fitted with Arcane pickups. This is a no frills guitar, and features just a single volume pot, which when you pull switches between the bridge and neck pickups. No need for clutter with a three-way switch, which I thought was a great idea on such a stripped down axe! The front of the guitar features the stunning Kamikaze graphic, which is immaculately finished around the pickup and bridge cavities, as well as on the sides where the graphic finishes. The back of the guitar is finished in black, with two covers, one for the access for trem springs, and another for the push pull volume pot. I should also point out that the input jack is routed out, so your lead stick up and out, instead of down, and doesn’t get in the way when playing sitting; again another nice design idea.

OK now for the sound test, and I must admit I wasn’t expecting too much from this guitar with a clean setting, but I was pleasantly surprised. The bridge pickup produced a nice biting bright clean tone, but when I pulled the volume control and selected the neck single coil I got some rich, warm Hendrix like cleans. But this guitar really comes into its own with a high gain sound. Backing off the volume on the bridge pickup cleans things up nicely, and the more you increase the volume the more saturated it becomes. Once in full high gain mode this guitar sings like a bird, albeit a dirty bird! Lots of sustain, exaggerated harmonics, and loads of kick. Switch to the neck single coil tone and you get SRV and Hendrix on steroids. For me I have two guitar sounds in mind for my own personal tastes, EVH in the bridge, and Hendrix/SRV in the neck. This guitar delivers these tones perfectly. I had loads of fun cranking up this guitar and ripping out Lynch Mob and Dokken riffs, plus some of my favourite Lynch wide stretching licks!

Feel wise, although heavy, the guitar was very well balanced and the neck was smooth and fast; the unfinished wood really helped with that. The frets were very well finished, none proud or with rough edges. The whammy bar also delivered, with minimal pull up, but enough for the bar to gargle. I have to say the setup on this guitar was one of the best I’ve ever seen for a guitar sent into us to be reviewed.

How to sum this guitar up? Well, obviously it isn’t going to be everyone’s cup of tea, especially with its stripped down features, and somewhat 1980s style graphics. There's also the slight question mark over signature guitars generally, with some players not being keen on playing 'someone else's guitar' as they view it. That signature aspect means this will obviously appeal to Lynch fans with some extra budget but I would also urge some of you looking for a stripped down shred machine to take a serious look at this guitar. Yes, it’s an investment, but you’re getting a hand made, master built guitar, of incredible quality and attention to detail.

I’m really sold on this guitar for two reasons: first, I’m a huge Lynch fan, and this guitar takes me back to those iconic pictures of George Lynch that I would look at in guitar magazines when I was a young teen. And second, I love stripped down '80s style superstrat, and this is the best one I’ve ever played! Be sure to not only watch the video review and demo of this guitar but hear and see me putting it through its paces in this issue's George Lynch Tech Session…enjoy!