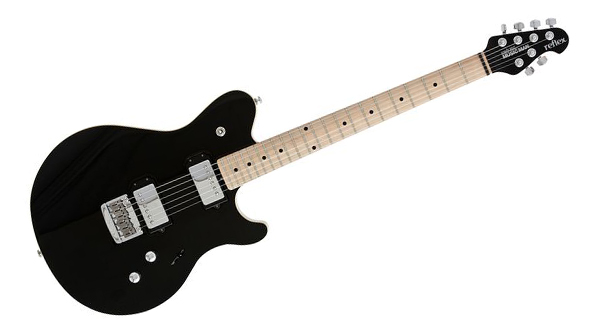 Sterling Ball has called the Game Changer one of the biggest developments in the electric guitar since Leo Fender created the five-way selector switch on a Strat! The Game Changer could certainly change the way we look at guitar electronics. Our resident Musicman expert, Jamie Humphries, is well placed to explain the system as he is a regular demonstrator. As Jamie is a Musicman endorser, we are awarding no rating on this unique iGuitar demonstration.

I've been playing a Reflex guitar for quite sometime now, the Reflex starting life as the 25th Anniversary Model. The Reflex is essentially a larger bodied Axis - a single cut design which started its life back at the end of the '80s, beginning of the '90s as the EVH Signature model. The slightly bigger bodied Reflex features a chambered basswood body with a mahogany tone block running through the middle of the guitar, where the pickups and bridge are mounted. The body includes a comfort cut where the picking arm rests, as well as a belly cut on the back.

There are various different pickup configurations available, as well as the piezo acoustic bridge option. The Reflex/Game Changer that I have as my demo guitar features an HSH pickup configuration, and includes custom DiMarzio pickups. The bridge is a vintage tremolo system, which comes set against the body from the factory. I have mine set-up so there is a whole tone pull-up on the G string.

Musicman guitar's normally have very small dot inlays, but for this guitar have opted for the bigger, more traditional, style dots. The neck and board are maple, with a 25-1/2" scale length, and a 12" neck radius, with a satin oiled finish. The fingerboard includes 22 high profile medium width frets, which feel great for bend and vibrato. The signature four and two headstock design features a black finish, matching the body and the design of the head stock results in straight string pull, meaning much more stable tuning.

Now on to the revolutionary stuff! At first appear the Musicman appears to have the regular controls you'd expect. At the lower part of the body we have a volume control, which when pushed acts as a save button, a single tone control, which is a push pull and acts as bank A, when down, and bank B when pulled up. There is also a five way selector switch, and on the top horn we have a momentary three way toggle switch which is the preset bank Z. As well as the regular ¼" jack, there is a MIDI-in that enables editing and also pickup selection via a MIDI controller board, and also a USB that enables you to connect the guitar to a computer for deep editing, using the online browser software, and also for loading a variety of user and artist based wiring configurations. The guitar does take three AA batteries for power when connecting to a computer and these cannot be recharged when the USB is plugged in.

So now that I have run through the spec of the guitar and the controls, what exactly is a Game Changer? Well in short, the idea of the Game Changer is that you can rewire the guitar in ways that have only been possible with extreme customisation to a guitar, including rewiring with a regular soldering iron, and either sacrificing some of the regular pickup selections found on a five way, or by adding an additional switch. There are many guitarists who are known for their unique tones that were produced by their either home made or highly modified guitars. Brian May is one player who springs to mind, with his Red Special, which is capable of various pickup configurations, either in or out of phase, courtesy of the six switches on the guitar. Another is the original Steve Morse Telecaster, which became the Steve Morse Musicman we looked at in iGuitar Issue 9. Again, this guitar is able to produce a variety of tones that you could not achieve with a regular guitar. But what if you were able to achieve these tones, plus literally millions more with one instrument?

Basically, the regular five way switch on a guitar is what the guitar designer decided were the most versatile sounds he wanted to make available and without modification those are the only choices you have when you buy a new guitar. What the Game Changer does is, effectively, let you rewire and store different wiring configurations, as well as the more standard configurations, and recall them on a gig/session with just the guitar controls that I outlined in the spec. You can wire in series, or parallel, in and out of phase, and you can also wire from different points of the pickup.

There are two main ways of programming the configurations, by either using the guitar itself, or by running it with a computer. When programming on the guitar, you simply choose a desired preset tone using bank Z switch, then push and hold down the volume control on the guitar until it mutes. Then select either bank A or B, and then set the five way lever switch to the location where you want the sound to be, hold the volume control again and the tone is saved; it really is that simple. I have my guitar set-up so that bank A is as I would expect an HSH guitar to appear on a five way, and then bank B contains more custom sounds.

The other way is to use the computer program, which works by simply connecting the guitar to a computer with a USB cable. By using the program it is possible to simply click on the pickups and have them change configuration for you, either splitting so you can use individual coils, running them in series or parallel, or simply in and out of phase. The other way of using the program is to use the grid, which enables you to wire different coils, and also have them in series, parallel, and also in or out of phase, but by using the grid you can get into much more intricate wiring possibilities. To really get a full understanding of this make sure you watch our demo video. Also with in the program there are libraries, where you can store your own sounds, share sounds with the online community and also load user sounds from the likes of Steve Lukather, John Petrucci and Blues Saraceno.

To many people the thought of all of these options, and connecting the guitar to a computer may seem too much. I have also had people quoting the Line 6 guitar to me in conversations about Game Changer but it's very important to realise that this is not a digital guitar. It is like a regular guitar that uses the computer to access countless options, but the guitar and pickups remain those of a normal analogue guitar. As regards to the learning curve, it does not take long to get your head around, plus with the various options of storing and programming configurations you can start with the basics, using the guitar presets, gain an understanding of the instrument and then work up to full blown grid programming.

I realise I could be accused of bias here as I am a Musicman endorser and product specialist, but we have consciously opted not to make this a review - more an explanation of a system by someone who knows how it works. So, no star rating, just make up your own mind from the video and, of course, trying one in a guitar shop! I can honestly say I have waited two years for this guitar. For my work at Lick Library and iGuitar, this is going to be such a valuable tool for being able to nail any tone I want. Also for a gigging guitarist, or the studio musician, it's a very powerful addition to your guitar arsenal. I couldn't be without one now.