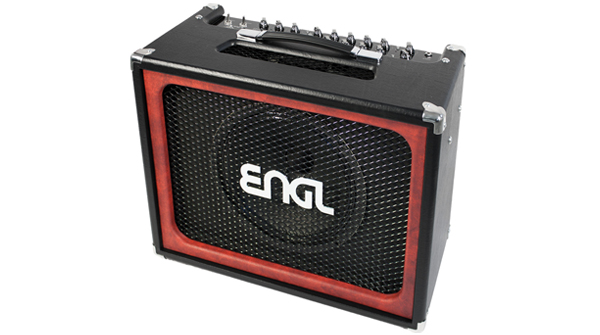 In each issue we try to look at some of the gear used by our featured players - but Ron Thal uses a complex Engl pre-amp/power amp set-up and Marty Friedman uses an Engl we're previously reviewed (a Powerball, in Issue 9). Still, we decided to stick with an Engl theme and whistled-up the company's new Retro Tube 50 combo. Rick Graham looked intrigued...

Having established itself as a major league high-end tube amp manufacturer, Germany's Engl has built a solid reputation on the basis of the quality of its products, most of which are geared toward the high-gain rock/metal player. Engl has scored highly with discerning pro players including the likes of Steve Morse, Ron Thal, Ritchie Blackmore and Marty Friedman as well as more recent players such as Jeff Loomis and Chris Broderick.

Recently, however, Engl has decided to set foot into uncharted territory, with the release of a new line of what it calls 'Retro Tube' amps. So far, the Retro range come in three forms: 100 and 50 heads and the subject of this review, the Retro Tube 50 Combo.

Other than the pre-amp controls being positioned at the top side of the amp, there is very little about the appearance of this amp that indicates anything 'retro' about it. In fact it looks as modern as they come, with the polished metal Engl logo displayed across the see-through grille cloth. That said, the term retro needn't necessarily apply to the aesthetics of an amplifier. There's no question it looks cool, though!

Essentially, the Retro Tube 50 combo is a two channel amplifier capable of delivering its 50 Watts output through a Heritage G12-65 Celestion speaker. The power tubes come in the form of two EL34s and the combo features a second master volume controllable at the rear panel, via the optional footswitch. The pre-amp section is made up of two channels: Clean and Lead, and a unique feature of this amp is that both of these channels feature a gain boost switch, which effectively turns it from a two channel to a four channel amp, loosely speaking. As if that wasn't enough, both channels each have a voicing switch with a 'bright' switch for the clean channel and a 'tone' switch for the lead channel. Each also features a standard three band EQ of treble, middle and bass controls, separate reverb controls and the addition of an in-built noise gate, with threshold adjust for the lead channel with gain boost on. You'll also find an FX loop, which is serial to parallel adjustable and switchable via the optional footswitch. Valves of choice for the pre-amp section are four ECC83 tubes.

So far, so very thorough! Once fired-up, I started with the clean channel engaged. The tone most certainly had a vintage vibe to it and with a touch of very natural sounding compression too. A quick flick of the clean channel's gain boost switch quickly pushed the amp into classic Rock crunch territory, with a very dynamic and responsive tone. Moving over to the lead channel was equally impressive and whilst it is possible to get some seriously high gain sounds cooking, the Retro Tube 50 always retained that highly responsive and very dynamic sound, regardless of how much gain I dialled in. Don't be fooled by Engl's use of the word 'retro':  the gain on tap here would be more than enough to satisfy even the most ardent of shred-heads out there!

I particularly liked the organic sound that this amp produced and, whether on the clean or lead channels, it felt great to play through and had tons of character and attitude. There's no shortage of volume here and you'd have no trouble being heard at club/pub gigs with this amp in your backline.

It's slightly disappointing not to have the footswitch included, though, at this sort of price.

There's no question that Engl has created a great product in the Retro Tube 50 combo. In fact it's quite a coup as what they've done is come up with an amp that would satisfy players looking for vintage, organic tones as well as satisfying a need for more high gain tones all rolled into one mean looking amplifier. All in all, it's well built, highly versatile and, while in the upper price echelons for a 'brand' 50 Watt valve/tube combo, happily below 'boutique' price levels. Nice work Engl.