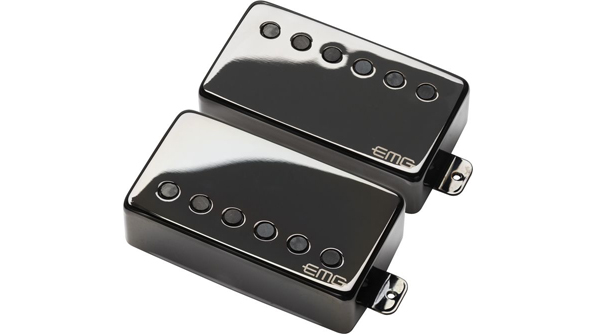 James Hetfield has been laying down bone-crushing riffs with Metallica for over 20 years and has always used one brand of pickup to do the job - EMGs. In fact EMG has become a staple part of the metal genre and its pickups are known the world over for their rich response, tightness and clarity - in a studio environment, but no less on stage, through 100 Watts of pure drive.

Hetfield's traditional choice has been the time-honoured 81 bridge/60 neck combination in all of his ESP guitars but around 2009, so the story goes, he contacted EMG's Rob Turner and told him he wanted what EMG calls a 'stealth' looking set that: "...captures the clarity and punch of a passive pickup and still retains the legendary active tone that molded a generation."

Apparently, Hetfield has always liked the punch and clarity of the EMG combination but after playing with a set of passives, was intrigued to see if EMG could come up with a combination of active/passive technology combining the tightness and clarity of active circuitry with the fat warmth and rich tone of passives.

Getting from there to the launch of these new pickups took some time and a lot of trial samples (19, Hetfield says!) and EMG says: "The JH-N has individual ceramic poles and bobbins that feature a larger core and are taller than the 60. This produces more attack, higher output, and fuller low end in the neck position. The JH-B uses the same type of core but has steel pole pieces, unlike the 81 that uses bar magnets. This produces the familiar tight attack with less inductance for a cleaner low end."

I was sent a sample set to try and fitted them to one of my own ESPs - an LTD EC 1000 - a really easy job. One of the great things about EMGs is that if you are already using this brand of pickups, replacing them is just a matter of plugging them in. If you haven't previously had EMGs, you need to do more, but you get a full kit and plenty of instructions, so as long as you're reasonably confident with a soldering iron and can find somewhere to store the battery you should be OK. If not, having a guitar tech fit them might be safer and not a very expensive job.

Once fitted in my ESP, the result was really impressive - so much so that I've decided to leave them there. As well as for the video on this page, I also used them in my new Licklibrary Quick Licks DVD: Progressive Shredding in the Style of John Petrucci and have had some great reactions to the sound I was getting. (Is that a cheap plug, or what? Ed).

For me, the James Hetfield signature series pickups deliver exactly what they set out to do. Playing through these pickups, you still get that punchy feel from an 81, but more overtones, giving a much richer texture that makes the guitar sound so much wider. The neck pickup is really creamy and is great for soaring leads, quite reminiscent of that holy grail Les Paul tone we all know and love. These neck pickups also delivers a really transparent clean tone that's great for individual picking through chords

To go with the new and improved sound is the classic pickup shielding that gives the pickups a much more cool and vintage look, so these pickups not only sound great, they look great too.

Swapping your existing pickups for a set of these doesn't come cheap, but if your aim is the perfect sound does money really matter? I know not everyone will agree but for me it doesn't. Nothing gets in the way of the sound! I'm keeping these.