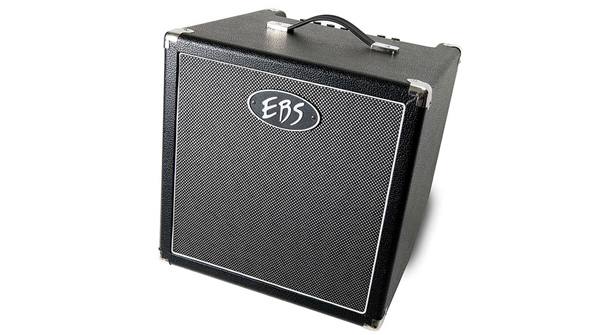 The Swedish company EBS has been in the 'bass business' since around 1988 and this diminutive 60 Watt combo, launched back in 2009, draws on EBS's heritage in the form of the Classic 450. I have to admit when I first plugged the combo in, its simple and clear layout had me thinking that it was going to perform like 'any other small boxed combo'. Well, I was pleasantly surprised when we set up to give it a spin. It does have an element of 'boxiness' to the tone when everything is set flat, which to be honest you can't really get away from in a mere 20 litre cabinet. A 10" speaker needs a certain amount of cabinet space that helps produce a better low-end girth. A small combo just doesn't have that luxury - and in this case, the really nifty 'kick back' of the combo means that more cabinet space is lost thus compounding the problem further.

However - and this is abighowever - it really does depend on how a manufacturer deals with these limitations, because if they get it right, it that can turn an OK combo in to a great combo. EBS on this occasion have thought this through and get the thumbs up from Mr Fussy here!

I've talked about the controls in the video already, but I do want to continue on my current thread of thought. Let me take you to the 'character' control. Yes, it does as you may guess from the name add 'character'. It boosts and cuts specific frequencies that results in sounding really great through the DI giving your bass a nice fat modern tone. Whether or not this was an intentional move by EBS, it just so happens that when you activate the control it gets rid of much of that small box effect and makes the combo cabinet sound much bigger. I think you could close your eyes and imagine a 15" speaker here. Again, for those wanting technical details, a 6dB boost at 75hz, 2.5dB cut at 800hz and a boost of 3dB at 9Khz for brightness.

On the subject of EQ, the Bass boosts and cuts at 100hz and the treble at 10Khz (both shelving) for a punchy bass and nice sizzling high end through the custom tweeter. The tweeter is hidden behind the removable face grill. The 'enhance filter' (when engaged) affects boost and cut of the mid range at an 800hz centre frequency when the treble control is cut or boosted.

All of this in a mere 16Kg compact combo will make it a great buy for home practice, writing sessions, small jams and maybe monitoring for an acoustic gig.

The Classic 60 could have easily have fallen by the wayside in a market swamped with practice combo amplifiers, however careful thought to functionality and tone have made this little chap stand with its shoulders just high enough to get noticed.