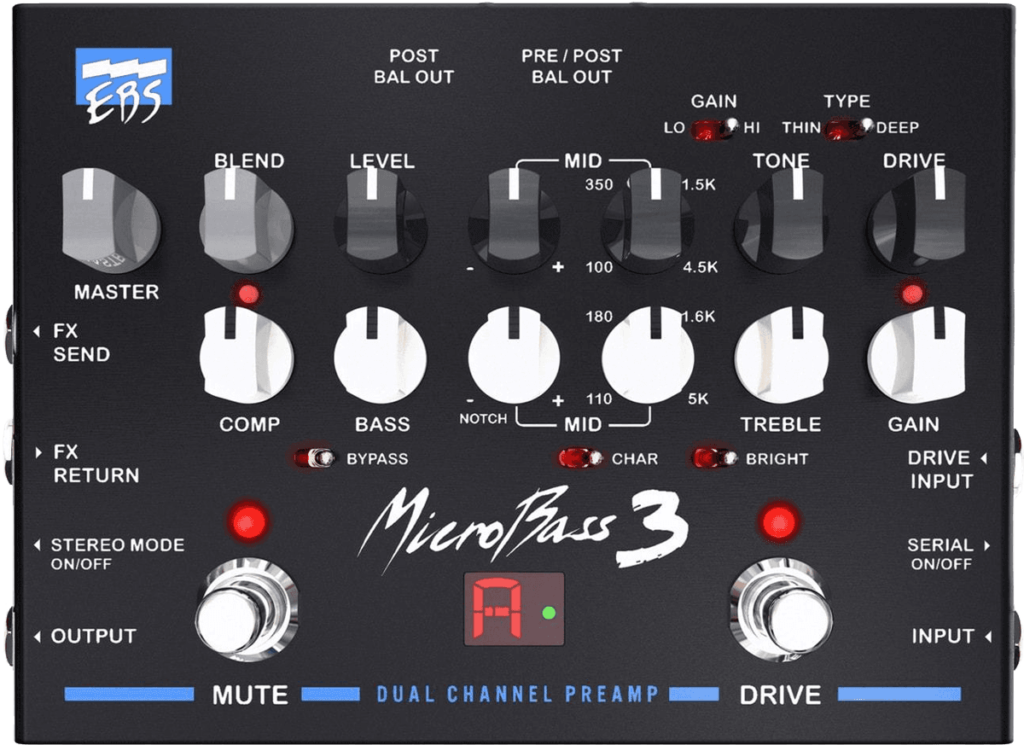 All of the features you need, especially if you run an IEM system only.

It's so good; the design is bound to be copied soon!

Built exclusively with premium components—the MicroBass 3 is a 2-channel preamp engineered by EBS in Sweden with technologies from the famous HD360 and Fafner II amplifier designs. Dan Veall Reviews.

EBS come zooming back into the Bassment with a brand new update to the well spec'd MicroBass II. MicroBass III builds on the preamplifier foundations that aren't a million miles away from the original EBS-1 19" rack preamplifier, I believe to be one of the very devices that helped "start it all" for EBS based in Sweden.

In itself a superb piece of kit.

Now, as much as MicroBass II did a great job being a super useful low noise multi-tool for both stage and studio, I did have just a few niggles with it's operation.

It seems that Ralph & co from EBS has been reading my mind: MicroBass III appears with not only all the things I would envisage included but a whole lot more to boot.

Let's round up the details from my video and find out why I like this beast.

There's so much to cover so I am not going to be able to go into depth regarding each and every knob's operation. I did however cover a huge amount of granular detail in the video , which will help you hear how each function operates.

The areas, (my bugbears I suppose) with the v2 that I am pleased have been tweaked, start with the equaliser section. Channel one originally had a two band EQ on channel A and the semi-parametric mid-band on channel B. We now have all of the above available on what is now called the clean channel - equivalent of channel A on the v2. I really wanted to have way more control and voicing options over V2's drive structure too. Yes, we have that as well now! The drive type and gain switches are very useful. The 'Deep' setting compensates for loss of low end when using high gain settings, but as I mentioned in my review I'd be careful when using that in blend mode as too much low end layering can make the sound a little less than clear - unless you have a particularly bright sounding bass to begin with. This function is a pre-drive shaping, thus will affect what frequencies are being sent to the saturating gain stages.

The "FX mix" knob, a blend, has been taken out on v3, but I'm not sure I'm going to miss it but the addition of the ability to go stereo is super handy! Not for everyone, but I love being able to add breadth to a bass sound using stereo spatial, modulation or delay effects when appropriate. The V3 gives me the option to use the pair of XLR outputs in stereo mode at a flick of a switch, or leave in dual mono, offering separate outputs for "pre" and "post" effected signals.

In terms of signal chain, the two preamplifiers can be run in parallel for some Sheehan-esque tone shaping, or you can configure operation that the clean channel runs straight into the drive channel in series instead. More gain will give rise to more distortion, which could be useful. Personally I prefer the option to keep the two channels separate and blend for clarity and coherence. Your mileage may vary, or to put it another way, go forth and experiment!! Just turn it up when you

I often mention this when it comes to semi-parametric mid controls: I thank any brand that knows to let the sweep to reach down into the bass range. The 50-200hz region is really important to perceived girth in the bass sound. So I was pleased to dial this in on any set up I have.

Other features I have found particularly useful include the compressor that was brilliant on studio-style settings. The famous EBS character switch always gives me that 'big cabinet' tone should I need it, but never muddy. EBS still have space on the device to fit an accurate tuner, foot switch to mute the whole pedal and the ability to kick in the drive channel from the floor rather than reaching for a little button to engage.

The MicroBass III's all analogue electronics are operating at "studio" levels, enabling a larger headroom, but also offering plenty of level on the output to even drive a power amplifier on its own. Super if you are an "FRFR" guy running into a beefy active (/PA) cabinet as your backline.

There's an effects loop - but given the multitude of inputs and outputs, I'd treat these sockets like inserts too, because I really love the idea of being able to route signals in and out of a central "tone hub".

Again, like V2, shielded in an all metal construction with some decent foot switches on board, this unit is well built for the road and can be powered through the usual 9v power supply (offering the correct current specification). EBS even do us the honour of including a power supply, which is very much appreciated!

Rounding up, this is an impressively featured preamplifier that can offer up a multitude of different voicing. There's grit available in the drive channel, but I love the clean channel's clarity and headroom. A great preamplifier, multi-tool and a great all-in-one DI box too.

Oh and my tip? Run the EBS Billy Sheehan Signature Drive pedals straight into this preamplifier, and that's a 5/5 from me.