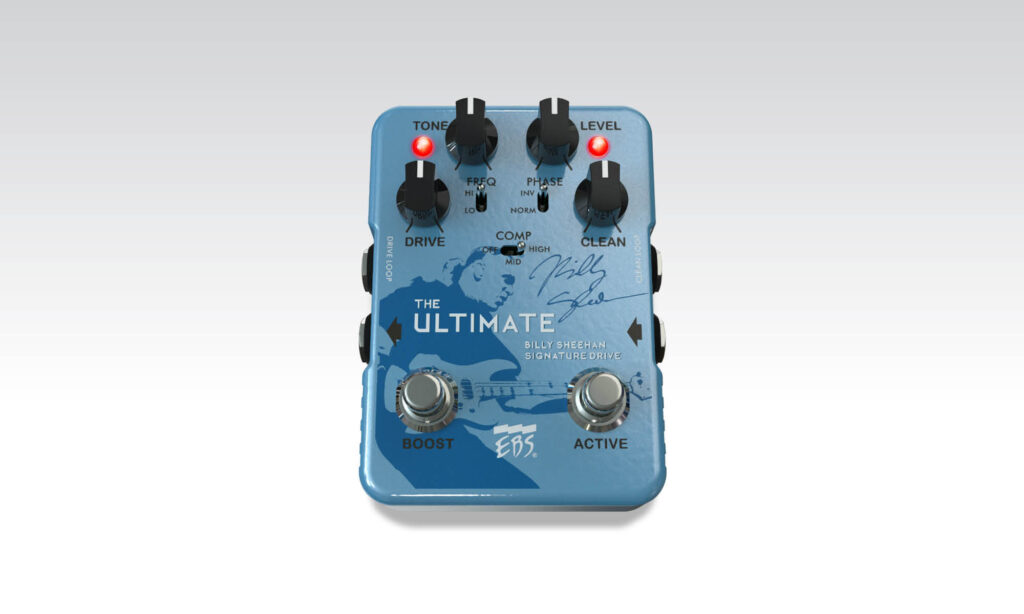 It’s crazy to think where the last six odd years have gone since EBS announced the collaboration with bass pioneer Billy Sheehan in the shape of the “original” ‘Billy Sheehan Signature Drive’ pedal.

We reviewed it in issue 18 back in 2013. I’ll hold my hands up. I went out and bought one after the review. I gigged it solidly, but it did come off my pedalboard eventually. Well, that would be because issue 42 came along where I had the opportunity to review the then-new ‘Signature Drive Deluxe’ in 2016. A facelift to a tasteful orange colour and a new set of features as well as a tweaked circuit. The improvements immediately made sense to me and I can reveal: The Deluxe pedal is still very much part of my collection. Fast forward to the now; EBS UK dropped me a line and arranged to get the brand new ‘Signature Drive Ultimate’ out to me. Well, I am very pleased they did!

For this review, I will invite you to seek out the previous issues of the magazine (or the videos that Guitar Interactive have very kindly reproduced on YouTube). You will get to hear about each pedal and its features. *I would add at this point that given the time between recording and the different kit used, it would be tough to make a direct comparison of all three. Hmm, maybe that’s a video for another day!

Upon the table then: It’s shrunk! A smaller enclosure following a rework and also a lick of fresh colour with a certain nod to a particularly well-known signature bass guitar no less?

“Ultimate” as I shall call it for the rest of the review is a distilled and incredibly complex signal path that Billy Sheehan has created through necessity over the years. Billy takes separate signals from the front, and middle pickups on his bass and these signals are divided into a “super low” clean sound and both top end clean and driven sounds. Yes, I have massively simplified the description as I don’t have the copy space to go into great detail. What I will say though is that Billy has used a lot of gear to do what the Ultimate does in a small box.

The Sheehan pedals all share the same topology. You plug your instrument in, and your signal is split into two discrete paths.

The first, whose level is controlled via the clean control knob, does exactly that - your clean direct instrument sound.

The second path is really interesting. Essentially it is a drive path, but it really isn’t the same as just dropping a distortion pedal on to your pedal board. I would say that the drive section is of the “bandpass” type in that there is some pre-EQ shaping before the distortion circuit and some shaping after also. Yes, this is all part of one circuit, and when solo’d you can hear that the drive is all about the midrange and treble frequencies. With this in mind, the drive on its own isn’t really useable for shaking the foundations; you could expect to disappear in a wall of guitar cabinets at full tilt. Here’s the beauty of the Ultimate though. It’s when the clean and drive circuits are mixed are you graced with a great big bass tone. An instrument with a naturally scooped sound will certainly benefit from that mid-range grind I feel.

The drive circuit is made up of a saturation control in the shape of the drive knob and a tone knob. The latter now has a two position switch that shifts the frequency range that the tone sweep effects, The previous pedal’s single sweep worked fine, but dividing up the sweep into two modes offers up more tonal breadth. Drive level is governed by the Level knob.

Another nice inclusion is the “phase invert” switch also found on the Deluxe pedal. It switches the phase of the signal in the drive path. Even without any other devices in the chain, I love how this affects the overall bass tone when blending with the clean signal.

Effect Loops: Using an insert “Y” cable (one supplied), external effects can be inserted into the Ultimate’s signal paths - yes, plural! Not one, but two effects loops are available! One for the clean circuit and another for the drive circuit (post drive).

The beauty of having two loops is that you could apply a different effect to the clean sound (like an octave) and say a chorus or filter to the drive sound only. Blend the two and BAM big bass sound!

Like the previous iterations, Ultimate has an adjustable compressor on board. As per Billy’s preference, the compressor is the last block in the signal path after the two signal paths have been combined. On the top panel of the pedal a three-way switch offers “off”, “mid” and “high” settings. The High setting is preset, but I love that the mid position can be set to taste using a pair of trimmers underneath the back panel should you need to tweak.

The bottom left-hand side of Ultimate is a second footswitch - this engages a boost circuit in the drive path that adds input level and thus when engaged adds saturation. Like the compressor, there is a trimmer should you wish to adjust the amount of boost applied.

If I wasn’t running out of space, I’d go into way more detail, but I wanted to include that, like the Deluxe pedal, the Ultimate also has a nifty option that allows you to change one of the Op Amps (chips!) for one of your own choosing. It’s a bit like “Tube Rolling” but in the solid state world. - I’ve not tried changing these integrated circuits myself, but I have definitely seen and heard of other folks out there giving it a go with exciting results. I love the stock chip in the Deluxe, but it’s nice to have something else to personalise in the bass rig ey!

one final thing to note is, EBS’ spec tells me that the Ultimate will work off DC power supplies up to 18VDC, which is handy! 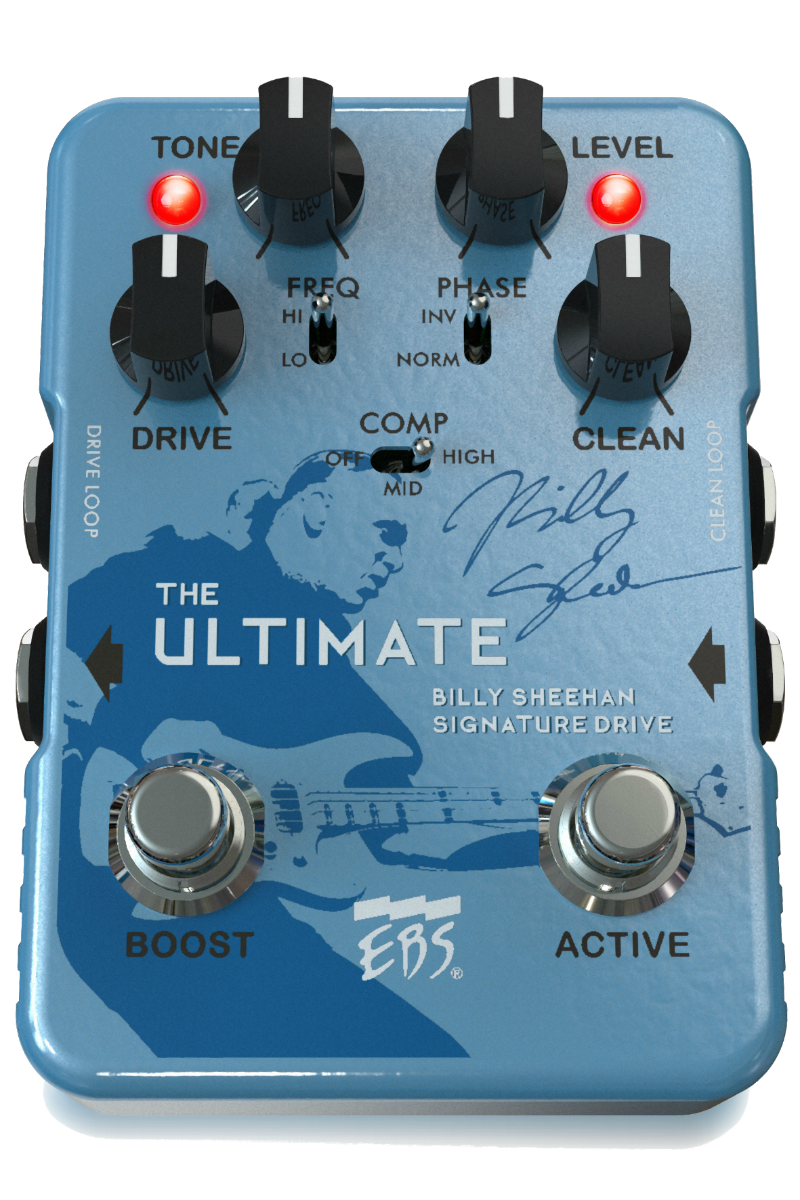 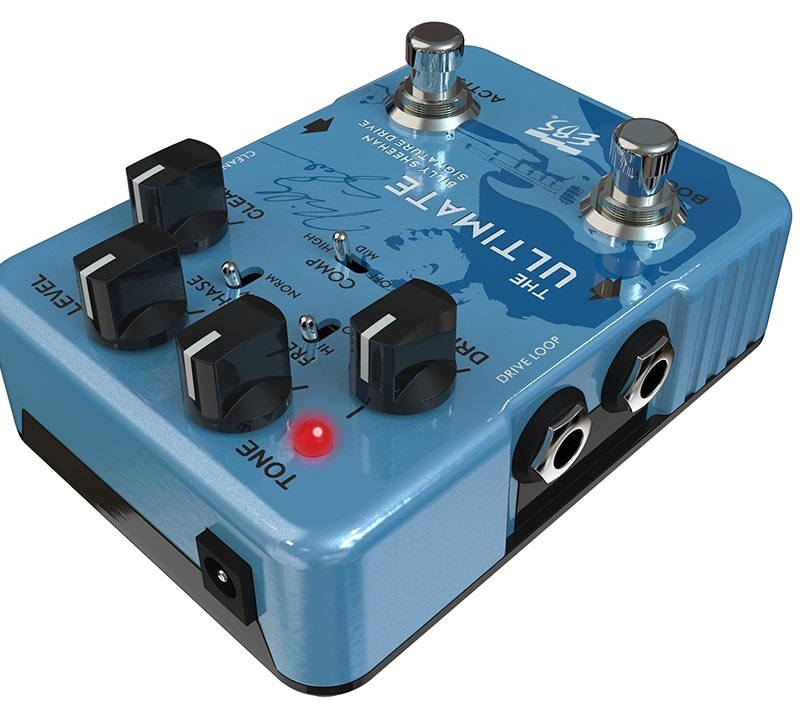