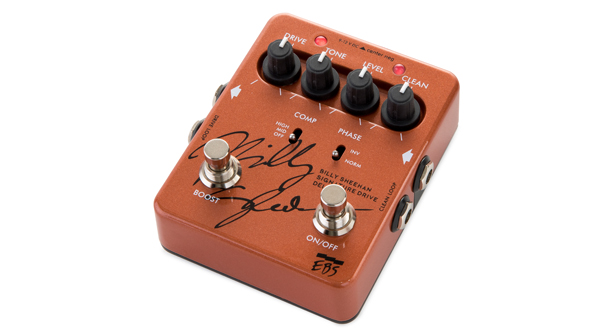 Cast your minds - and indeed your eyes - back to 2013 when I reviewed the first EBS Billy Sheehan Signature Drive pedal. (Guitar Interactive has very kindly placed the review on YouTube too for you to check it out). Now fast forward to 2016 when Version 2 of the very well received pedal was announced at Winter NAMM this year and we have one here for you to check out, just as soon as I can release my grip on my credit card!

Much like ‘version one’ it follows a similar dual signal path layout. For those who haven’t seen or tried the first version, allow me to explain briefly (better still check out my earlier review). Billy Sheehan has a very interesting set-up with his bass gear in which (to simplify) he splits his audio path in to separate routes right from the pickups on his instrument all the way to separate amplifiers on stage. In essence, he has one path that handles a clean ‘unaffected’ bass signal that carries the low end punch and rumble of his bass tone and another that deals with the driven distorted and top end parts of his bass sound. He historically achieved this by using a wide range of rack mounted kit and complex signal routing but Billy himself has said that it’s not always easy to ship these big rack systems to shows.

Thanks to a close relationship with EBS, Billy has managed to distill much of his signal path in to a single pedal and that’s what we are looking at today. For this video I have set the pedal up to in no way attempt to mimic the sound of Billy Sheehan’s own rig. I want you to hear the pedal through a different bass and amplifier combination.

So, the short description is that we have a distortion pedal here that is designed for bass guitar which allows you to retain the low end punch of your bass signal.

On the outside we have four main controls. The first three are the more usual for a guitar pedal. ‘Drive’ provides saturation, ‘Tone’ to zone in on that tonal sweet spot using a sweepable mid/treble filter and of course ‘Level’ to set the overall volume of the driven signal versus bypassed. Incidentally, whilst in bypass this pedal is ‘True Bypass’ meaning there’s nothing sucking your tone when it isn’t engaged. To the left of these knobs is also a ‘Clean’ control too - as per Billy’s signal path, you can also mix in your direct clean, punchy dry bass sound. I love that you have two separate knobs here rather than a volume and a blend. It means that you can do some interesting mixing between the two rather than being forced to have a preset ratio mix of one and the other. There’s enough volume gain to also jump up for solos etc., too.

On the subject of boost I come to the first of the new features on the pedal. Bottom left hand side of the pedal top next to the on/off switch is a 'turbo' mode! Well, OK, it’s a bit like throwing an overdrive pedal in front of a valve amplifier. The boost gives you a preset level (via a trimmer under the back cover) of additional boost to further saturate the driven signal. This is great. I loved the boost function on my Ampeg SVP-BSP (another Billy Sheehan product) and I missed it on the first EBS pedal. Adjustment is between +3 and +10db so there's quite a range of variation there.

It’s worth mentioning that the boost control is before the drive section and will make no difference to the overall volume knobs or clean signal output.

On the subject of the clean signal, both individual signal paths of the pedal have a very useful set of extra sockets and this is a big sell for me. This means there is an effects loop for each path. I love this - you can add additional effects in to the signal chain and punch all of them in and out in the same way that we would use an ‘effects loop’ pedal but additionally, you can have effects on the distorted signal alone or on the clean signal alone - or both at the same time! Synth effect after the distortion and swirly wide chorusing on the clean bass signal, maybe with some additional EQ and octave? Nice! The ability to do this is something you need to hear to appreciate, especially when using complex routings of effects. It’s worth it though!

Another new addition for this pedal is a phase switch that is inline with the distortion path after its effects loop. The switch inverts the driven signal which on its own, isn’t a noticeable change, however when this signal is mix with the clean bass signal you will notice a change in tonal character coming from your amplifier as some frequencies get cancelled out and some get summed. Furthermore, if you are used to using pedals that by design invert the input signal (a Tubescreamer for example) you will have probably needed an effects loop pedal with a phase switch to return the signal to the correct phase in order to not suffer from a hollow bass tone, or at worse missing in low end. This ‘Sheehan Deluxe' pedal can take care of that too. I would, up until now, have to use a separate pedal to ‘fix’ these issues. The effects loops also serve a very useful purpose as it is possible use them as insert points. This allows you to feed signals out to another amplifier or have some fun mixing signals from other external devices or instruments with your bass signal.

Both signals are at this point ‘reconnected’, summed and fed on to the pedal’s rather good EBS full band compressor! As per the original Sheehan Drive, this one also shares the same three position switch on the fascia, with Off, Mid and High settings. The High setting is preset however if you switch to the Mid position, you can further tweak via two trim pots under the back cover! Are there no limits to the tweak ability of this orange wonder??!!

Well, apparently not, because EBS has crammed an astonishing amount of all-analogue electronics in to the pedal and with one final leap for your wallet, it has mounted one of the Operational Amplifiers (Chips, Integrated Circuit) on a DIL socket (a socket that allows easy removal of said component). This allows the user almost endless opportunities to swap out this IC for similar types that will change the character of the pedal’s distortion. EBS I understand may offer a range of branded chip types to try out but I have no confirmation of this yet.

That’s the functionality of the pedal, but how does it sound? Well, similar to the original but all the things I wanted in the original are now at my fingertips. The phase switch in conjunction with the tone control is very useful indeed. I don’t have both pedals to compare side by side, but if I had to listen back to my original video, I feel with the tweaking in this model, it is a little richer than the first - and of course there’s lots more gain on tap. Even with the standard chip installed, I think this one is a bit more refined too.

Summing up is easy. You’re unlikely to find many distortion pedals on the market for bassists that have managed to shoe-horn this much in to one box and sound this good without going down the ‘custom build’ boutique route. Superb. Superb.