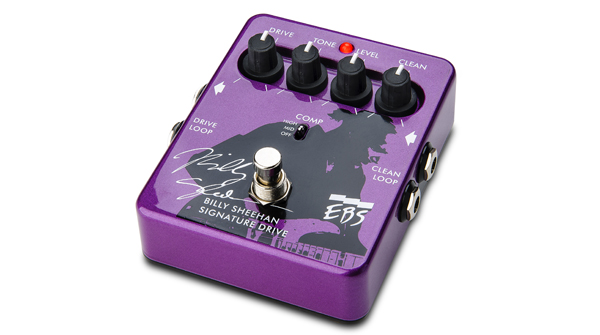 It won a 'best in show award' at this Winter NAMM, but is the EBS Billy Sheehan distortion really that good? Dan Veall gets stomping.

This could be one of the fastest reviews I have ever written and for good reason too! The pedal certainly has been a long awaited, after Billy Sheehan was spotted using his prototype model out in the wild. It was launched at this year's Winter NAMM in the USA and promptly won a 'best in show' award - no mean feat for a 'mere' pedal!

The pedal itself, as the name describes, is a distortion unit and is capable of light to medium high gain. I say medium high as it won't take you to over the top 'Boss Metal Zone' territory but certainly more than enough aggression to melt a few faces if you drive it with 'hot' pickups.

Designed and developed by Sweden's EBS and Billy Sheehan, the pedal takes his complicated signal path and simplifies it as much as possible into one core unit, while still allowing the flexibility to add other pedals and processors to make up your very own sound.

So let's talk about Billy's signal path, which, essentially, is derived from a fairly complicated rig that allows the mixing of both a clean and fat bass sound and a distorted bass sound together. The reasoning for having the clean signal mixed in is that, historically, using high gain distortion pedals robs you of that all important low end. You've probably toyed with a guitar distortion pedal in a band setting and wondered where all the low end went when you engaged it? Well, this pedal helps to fix that problem by allowing the natural lows of the bass signal come through too.

The pedal has four clear controls on the top panel as well as a three way switch, sturdy foot switch and four sockets for connection. Inside the metal shell there is space for a 9v battery as well as a couple of trim pots for personalised settings that we will talk about in a moment

The pedal is split in to two signal paths after a buffer circuit from the input jack. The first path sends your bass signal to the distortion section. First up, the drive control sets the amount of distortion from a low grit to a good amount of saturation. Gnarly but still with definition. The distorted signal is then sent on to a filter controlled by the 'Tone' knob. The manual describes this as a sweepable frequency scoop from lower to higher midrange. It's a really simple way to find a tone sweet spot that suits your particular bass or tonal tastes. Now, here's where things get a bit interesting! After this section, the pedal includes an effects loop for the distortion path, allowing you to add more effects of your choice to the distorted signal only, maybe an EQ or maybe another distortion for over the top all out grind - great for doing Chris Wolstenholme impressions I'm sure!

The signal from the effects loop is then sent to the level control on the pedal for final mixing with the clean channel. Speaking of which, right from the input buffer circuit, the clean bass signal is sent directly to a second effects loop. That's right, one loop isn't enough - there's also a loop for connecting effects that are fed by the clean signal - this could be modulation or EQ effects - wow, why not have another distortion in parallel with the distortion effect on board! Overkill - but great fun!

But things don't just stop there, this pedal has another trick under its hood that really sets itself ahead of other bass distortion pedals I have seen and tried out. The signals fed back from both paths are run in to a custom onboard EBS compressor. Whether or not it is a similar circuit to that in other EBS pedals and amplifiers I don't know - but given the EBS Multicomp is probably one of the best compressor pedals on the market, you can be guaranteed that this one sounds great. The switch on the front panel is a dead simple way to access the compressor settings. Setting it in the down position puts the compressor in bypass. In the up position gives you a full-on compression effect, the exact parameters for geeks like me are noted in Tech Specs section of this review. That leaves the middle position. Thank you EBS for including this. The Mid position gives you access to the two trim pots inside the pedal that allows you to set the threshold (the level at which the compressor takes effect) and the Compression control sets the amount of compression being applied for a personal setting.

Here's another cool thing you can also do with the pedal - it's safe to 'pick off' signals from the effects loop too. You could send the dirty channel off to another amp altogether using the send output - or feed another loop in to the clean loop return to make use of the compression and mixing features on the Signature Drive pedal. There are plenty of possibilities that make this a really useful rig tool.

Tonally, the signature drive is rich, with a pristine clean sound (as can be certainly expected from EBS).  The distortion channel is gritty, well defined with a wide range of crunch and distortion  available. The two effects loops are a superb addition as is the compressor. The pedal makes a superb 'hub' for other pedals to connect to as I mentioned above - indeed, I used to use a Boss LS-2 as my own central hub to mix my clean and dirty bass tones using other pedals.

Are there any downsides to this pedal? Well, a few things came to mind as I was reviewing. Firstly, the pedal size could be considered non-standard. You may have to shift things around a bit on your pedal board. I'd not be fussed though as I'd be taking two pedals out of my board to put one in. Next up, the effects loop connections will require 'Y cables' that allow you to have a send and return connection on each of the effect loop jacks. You'll need one cable per effects loop. EBS thankfully makes them available, or you can source your own to purchase.

The two things I would love on this pedal are an additional gain stage. (I really love the cascaded gain on the Ampeg SVP-BSP Billy Sheehan preamp that I have. The 'boost' setting is superb) and me being Mr. Fussy, I'd love a dry blend around the compressor for parallel compression, one of my all time favourite effects. That said, I'm really being a bit cheeky here as the pedal is so feature rich already. It really delivers so much for your money.

It really is no wonder this pedal won a 'best in show' award from NAMM. Check out our video and you'll soon hear why. In fact it's so good, I've just bought one to go on my pedal board.