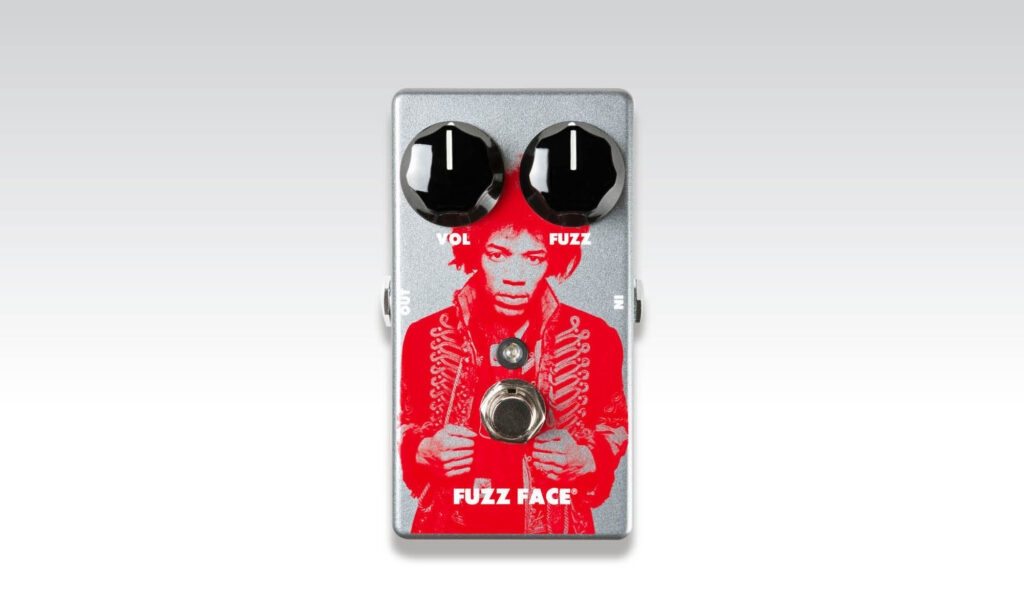 The Fuzz Face was a vital part of Jimi’s tone and was the heart of Jimi’s drive tones on “Are You Experienced”.

In issue 55 of GI we began looking at a stunning collection of MRX official Jimi Hendrix pedals, namely the Mini Wah and the Octavio Fuzz. In this issue we continue through this celebratory range of pedals by looking at the Univibe, Fuzz Face and the Gypsy Fuzz. These pedals faithfully recreate the pedals that Jimi used on many of his best-loved recordings, all housed in compact cases, sporting true bypass circuitry and iconic Hendrix artwork by Gered Mankowitz.

The Fuzz Face was a vital part of Jimi’s tone and was the heart of Jimi’s drive tones on “Are You Experienced”. This rather crudely made pedal was originally housed in a round casing, fashioned after the base of an old style mic stand. The unit only contained a few components and was relatively cheap, but produced a thick; rich fuzz tone that graced many classic recordings.

The newly updated version of the Hendrix Fuzz Face features a circuit that is meticulously faithful to the original Dallas Arbiter unit used by Jimi. The pedal is now housed in a compact “phase 90” size chassis and includes a status LED to indicate when the pedal is active. The front of the pedal boasts two rotary controls; effect volume, and fuzz. Turning these clockwise will increase volume and the amount of fuzz, and counterclockwise reduces the volume and amount of fuzz. The unit features true bypass switching and a familiar stomp style switch to engage and disengage the effect. The sides of the pedal house the input and output as well as the 9-volt power adaptor. In use, the pedal recreates those psychedelic fuzz tones of the 60’s with total authenticity. The pedal produces a surprisingly wide range of tones, from harsh aggressive fuzz; to smooth rich distortion, as well as clipping cleans.

This is a great little fuzz unit, and whether or not you’re a Hendrix fan this space saving version of the classic old “flying saucer” style Fuzz Face would be a welcome addition to any guitarists board. This pedal will do everything from Hendrix to David Gilmour, Eric Johnson and more.

A welcome updated version of a classic, historical pedal

Totally authentic tone while including modern pedal technology and features

Next up we have an updated version of a Fuzz Face Jimi used in the late 60’s/early 70’s with “The Band of Gypsy’s”. This new version of the Fuzz Face was housed in a red circular casing with two white knobs, and although resembling the original Fuzz Face this newer version had a much more aggressive distortion tone. This original pedal is long lost, but the journey to recreate this pedal has led to Dunlop technician painstakingly studying different customized circuit designs used by Jimi. After much painstaking research and testing, they narrowed down the elusive hallowed tone to a version of the Octavio circuit minus the octave up signal. Once they had the tone nailed it was time to bring the pedal up to date with some modern refinements. Once again the compact “phase 90” case has been used, which houses the true bypass stomp switch, and the pedals LED indictor. Once again this pedal features the same striking artwork. The sides of the pedal include the input and output plus the 9-volt power socket. The controls on this pedal include output controlling the output level of the effect, fuzz to dial in the desired amount of fuzz, and a tone control; a welcome new addition to this pedal.

In use, you can hear that this pedal has a much more aggressive tone, and echoes the sound of Jimi’s performance at “Woodstock”. The tone control adds a new dimension to this classic fuzz enabling further tone shaping plus enabling you to cut or boost tone depending on the type of guitar you play and what pickups it has.

Once again Dunlop have really managed to refine a classic pedal. The tone is very authentic and musical, and the addition of the tone control enables you to control that inherent “bloom” you often get when using aggressive fuzz.

A fantastic sounding version of that classic early 70’s Hendrix tone, with some welcome modern refinements

Hendix purists may have preferred the pedal without the addition of the tone control.

Another crucial Hendrix effect along with Fuzz and Wah is the Univibe a chorus/tremolo unit that was made to emulate the Leslie rotating speaker. Jimi famously used the Leslie on the introduction to “Little Wing”, but the Univibe can be heard on such tracks as “Machine Gun” and “Star Spangled Banner”. Many other artists have used the Univibe the most notable being Robin Trower and David Gilmour.

There have been several versions of the Univibe, often with the main unit and a separate rocker control for the speed of the effect. For this collection, the Uni-Vibe has been scaled down and once again housed in a “phase 90” style chassis. The front of the pedal has the LED indicator plus the true bypass stomp switch. The pedal has three rotary controls; level for the overall effect level, speed to control the pulse of the chorus/tremolo effect, and depth which controls how intense the effect is. We also have a small push/push button on the front that selects between the chorus and vibrato modes, plus a little red LED that lights up when in the vibe mode. The sides of the pedal house the input and output as well as the 9-volt power socket.

In use, the pedal is very inspiring to use and produces a very rich, lush yet utterly unique chorus effect. You won't get this effect out of a standard chorus pedal. Adjusting the depth and speed enables you to go from a subtle light phasing to a very intense washy effect, which sounds great either clean or with fuzz. The vibe is also a very musical effect, and great for quirky Hendrix inspired funky riffs and mildly driven vibe tinged leads.

I love Univibe; I have an old Roto-Vibe plus I have one of the big old silver Univibe’s in my rack. I have tried digital recreations of the effect but they just don’t have the mojo of the real analogue version. For me its all about the chorus effect with the Univibe; drop the speed and turn up the depth and level for a rich psychedelic chorus; fantastic!

A beautiful effect that should be appreciated in all its analogue glory! 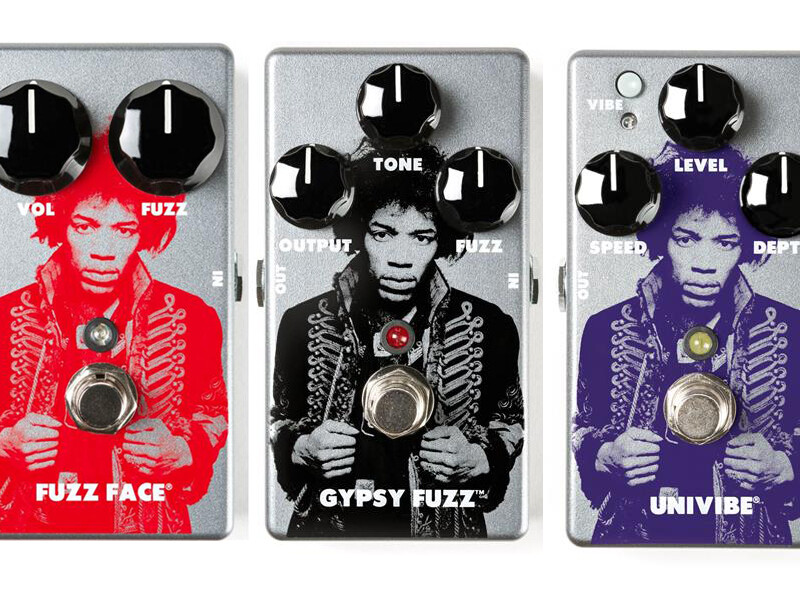 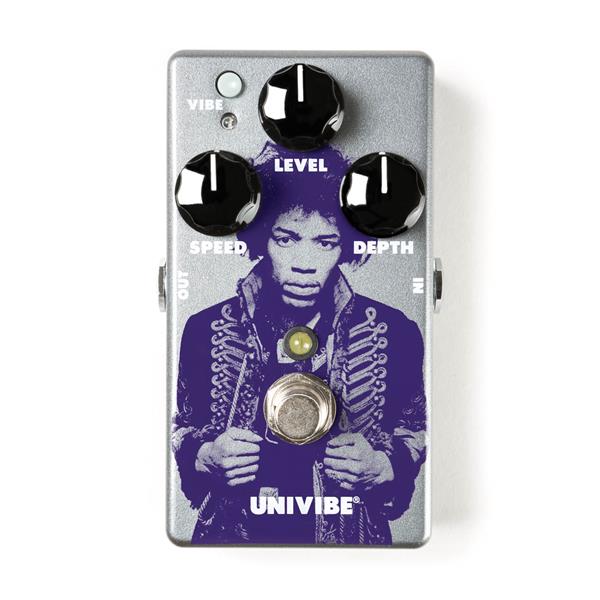 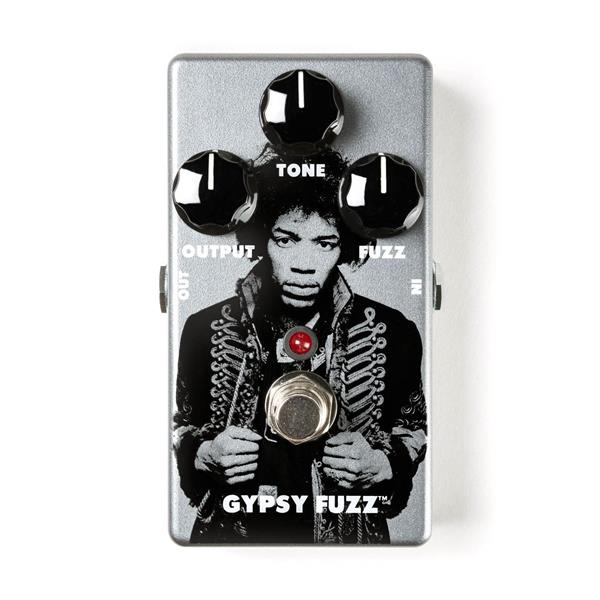 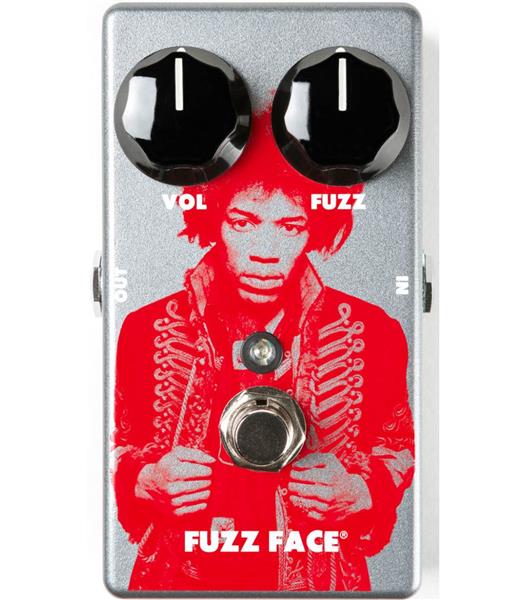 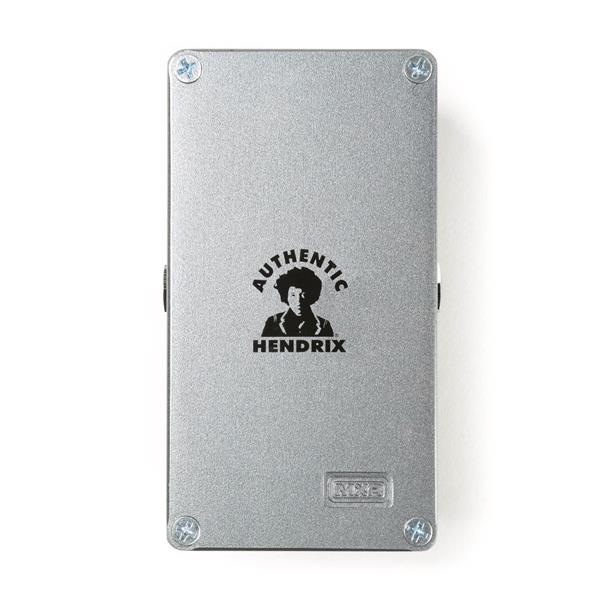