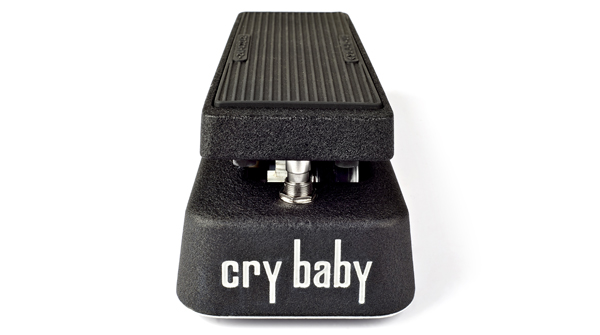 It's no secret that the wah pedal market is a saturated one, even Dunlop (being one of the originators of the sound) has almost 20 different wahs on the market, so do we really need another one? I'd always assumed the answer was no, then I sat down with the new Clyde McCoy Cry Baby Wah Wah.

Invented by Brad Plunkett for Thomas Organ company, the original patent dates back to November 1966. Back then the unit was branded with both Vox and Dunlop, even though both were made by the same company (Thomas Organ), this just allowed them to distribute everywhere as Vox had exclusive dealers at the time. It was likened to the trumpet sounds of Clyde McCoy, so the owners decided to licence his name and the Clyde McCoy Cry Baby was born.

Over the years the design has changed a lot, but as with just about everything in the industry, there's a lot of mystery surrounding these old vintage pieces of gear, the idea being that they don't make them like they used to and the real tone is found in these period pieces. With the wah pedal, this is actually 100% true as the circuitry did change over time. The original wahs were made with Halo inductors. The inductor is probably the most important part of a wah pedal as it shapes the “Q” in your tonal spectrum, and over the years companies have used components like the Fasels, the Film Cans, TDKs, Stack of Dimes etc. The Halo inductors had an incredible tone, but they tended to become microphonic quite quickly, rendering the wah useless.

For this new release, the masters at Dunlop have redesigned and manufactured a Halo-esque inductor, aptly named the HI01 Halo Inductor. Just sitting and playing with this wah for a few minutes and you know exactly why they put in the time. Some may argue that doesn't justify over double the price of the stock Cry Baby, but I would say those critics probably haven't played with this wah!

In terms of features, this wah is of the “less is more” school of thought, just offering you the one wah sound housed in the classic Dunlop housing. There's option for a 9 volt supply, and the pedal is engaged by clicking down with the toe. Would it be nice to have more features? Possibly, but what it does, it does so perfectly that I find it hard to really find fault in doing one thing really well. It's a simple wah made solidly from premium components giving you that vintage tone on a budget. Now you can leave your prized $1,000 wah at home and hit the road with something just as good and three times as reliable.

This wah is a must try for any serious tone chaser as it's probably exactly what you've been searching for, excuse the pun, but this is the real McCoy! (I knew that was coming - Ed).