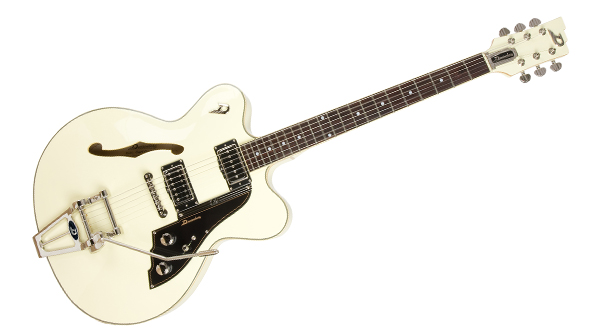 There are times when a pointy headstock just won't do. When what you really need is a guitar that shouts retro semi-acoustic class and takes you straight back to the '50s. Cue Germany's Duesenberg, a time machine and Michael Casswell's take on the legendary Scotty Moore.

OK, guess why this Duesenberg is called the Fullerton? Because it comes from the Duesenberg factory that they built a stones throw from Leo Fender's original Californian workshop in Fullerton. That's a pretty cool fact, a good marketing angle and a great heritage for any electric guitar. But by doing that, this Duesenberg Fullerton had better be good, or it'll be almost sacrilegious to be putting out less than wonderful instruments from Fullerton, considered the birthplace of the modern electric guitar!

Duesenberg should be able to pull it off, though. Started in the 1980s by German designer Dieter Gölsdorf, the company immediately staked a claim to retro Art Deco styles, cleverly creating a past that never existed and, in the process, appropriating the name of an iconic US car maker, beloved of vintage fans but not with us since the 1930s. It was clever marketing and very well timed for a generation of guitarists who were itching to throw over the '80s big hair and pointy headstock era. But it wouldn't have worked if the guitars had just been all show. They weren't and Duesenberg soon had a list of users including Joe Walsh, Vince Gill, Ronnie Wood, Elvis Costello, John Mayer and Robbie Macintosh, to name just a few.

So back to the first Duesenberg we've had in the studio to try. The Fullerton certainly shouts vibe, coupled with quality. Even the case it came in was superb. Strung with heavy-duty 10 gauge strings, acoustically it was loud, vibrant and very alive, like a good semi-hollow body should be. Beneath the laminated top back and sides there is a centre block of maple with a hollow chamber either side, so even before you plug it in, it's all there. Plug it in and you are rewarded with a fine old school tone that you just can't get from standard solid body guitars. Combined with Duesenberg's own P90 and Grand Vintage pick ups, which are full of great usable character, the sound is clear, full and rich. This is one of those guitars that even if you plugged it into the worst amp imaginable, you would still be able to get a cool vibey tone to work with. It's just that good.

The Fullerton CC has a laminated spruce top, with laminated maple back and sides and a maple neck with a quality rosewood board. A solid colour guitar is usually a way of using plain looking wood, which is not a bad thing because sometimes the plainer the grain, the better the sound, and this guitar looks great in white. As with all Duesenberg guitars the look and design is very Art Deco and the image is backed up by up-close scrutiny of the workmanship and detailing. Even the locking strap buttons have their own cool style. As for the Deluxe tremolo, well I was ready to say it was form over function and as good as useless, much like most Bigsbys I've tried - but it wasn't! It actually worked smoothly, stayed in tune, and would be a fantastic colour soundwise if used tastefully (much like any trem). You couldn't be as extreme as Jeff Beck on it, but it certainly is very usable and adds to the overall retro vibe of the guitar. On the face of it, the trem seems to be based on the fundamental Bigsby design, but I'm fairly confident that Duesenberg has tweaked the whole lot to make a unit that actually works, and works well!

I own a lot of Guitars, but none of them could put out the same tones that the Fullerton could. You are probably not going to be playing metal with this guitar, but for rootsy Blues and Soul, Rockabilly, slide, Jazz and general cool vibes, this would be a very nice purchase indeed. OK, it wouldn't be a cheap one, because Duesenbergs are at the higher end of the market, and as usual, quality comes at a price. So this isn't a cheap guitar. All the same, in terms of what you are getting for your money, this would be a great buy for the guitarist who wanted that retro vibe from a professional class guitar and wouldn't be satisfied by cheap clones.

What can I say? The Duesenberg Fullerton CC made me come over all Scotty Moore in the demo, and it would certainly have a good effect on you too. A good guitar will do that to you and if this stunner is anything to go by, Duesenberg certainly make good guitars.