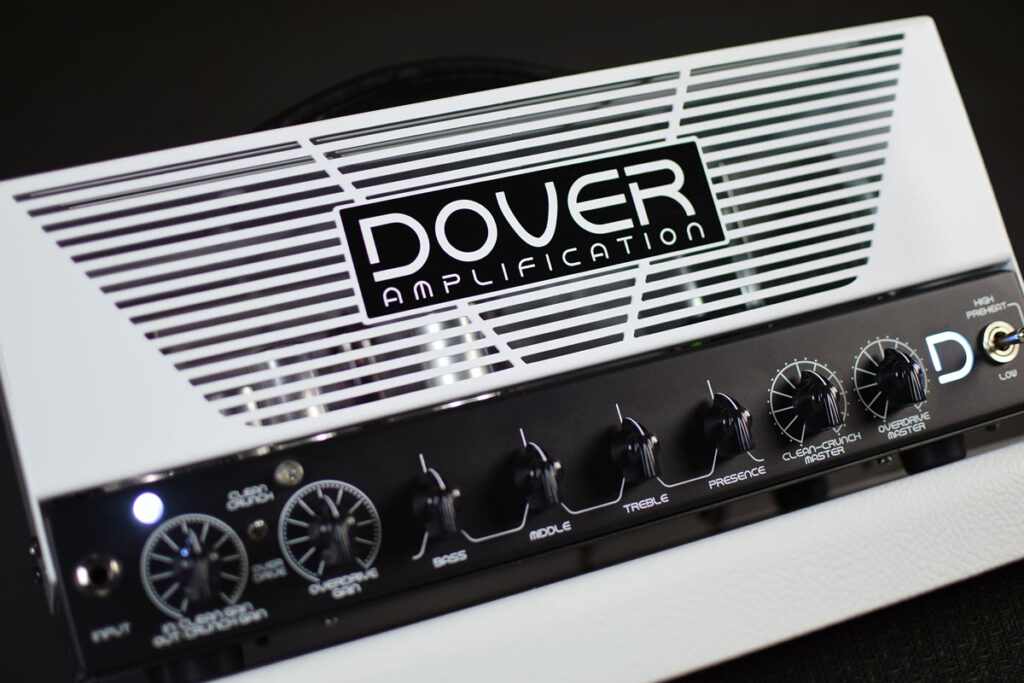 Dover describes their work as a "result of an obsessive pursuit of tonal perfection," and from what we've heard so far, that hard work has indeed paid off. Following on from his review of the DA-20CE in the last issue of Gi, Tom Quayle takes a look at two more models in the Dover range packed with creamy, chiming cleans tones and aggressive, all valve-driven overdrive: Dover's DA-50 and DA-20.

In the last issue we checked out the Dover DA-20CE, and we're hugely impressed with the boutique, versatile, pedal platform tones on offer from this new, high-end British amp manufacturer. For this issue Dover is back again with two amps sporting a much more modern, high gain take on the British tone.

The flagship DA-50 is a large format 50w head voiced with a quartet of ECC83 preamp valves and a pair of EL34s in the power stage, whilst the smaller DA-20 head takes a similar approach, but with two EL84s in the power stage for its 20w power rating. Both amps are based around a 2-channel design but differ in their implementation of the channels in terms of sonic territory and aims.

The DA-50 is, in some ways, the simpler of the two with a pair of identical channels each with independent gain and master controls with a single purpose in mind – giving you access to Dover's idea of the best, modern high gain sounds on the market. Sure, both channels can offer you relatively clean and edge of break up tones at the lower gain settings, but this amp is really designed to chug, and it does so with incredible authority and tonal excellence. The two channels share a three-band EQ in the preamp and Presence and Depth controls for the power stage, giving you added bite and low-end thump as required. A switchable pre-gain boost can be engaged for the selected channel, offering incredible amounts of modern gain at the upper ends of the dial and both channel selection and boost can be operated by front panel switches or via a foot switch.

This setup allows the DA-50 to be much more versatile than you might expect and effectively operate almost like a 4-channel amp. You can set Channel 1 as a clean or edge of breakup tone and then boost it for a crunch, whilst channel two can be setup with more gain as a heavy rhythm tone that can be boosted for saturated leads. The cleans are not quite as dynamic and pedal-friendly as the boutique voiced DA-20CE, but they are way better than most other high-gain amps on the market and backing off the volume control on your guitar cleans even saturated sounds up nicely.

This is a much more dynamic and expressive amp than you might imagine, given the intended tonal purpose. It's also exceptionally loud, even in half-power mode so will suit even the loudest heavy bands out there. A high quality, transparent FX loop and external power tube biasing points also add to the pro, boutique feel of this amp and thanks to the company's UK location (at least for the UK and European customers), the price point is incredible given the tones and exceptional build quality and materials on offer.

Its smaller sibling, the DA-20 is also a 2-channel, high gain beast but in a smaller, all metal head shell and slightly different configuration. Channel one is a dedicated clean/crunch channel with a push/pull gain knob to select between clean and low to medium gain crunch tones. The second overdrive channel is where the Dover high-gain magic happens and it has a similar voicing to the higher gain settings on the DA-50, with more than enough gain to satisfy even the most hardcore Djent fans. Both channels have the same shared EQ design from the DA-50 with an overall presence control, but there is no depth control here. There is also no switchable boost on the DA-20, but you can achieve similar results with a Tube Screamer or boost pedal in the front of the amp.

Like its bigger brother, the DA-20 has a low power output mode for smaller venues and home/studio use. Still, it's more than loud enough for large venues in full power mode and has plenty of clean headroom thanks to the dedicated clean channel, and independent master volume controls for each channel. You also get the same high-quality FX loop and external biasing points from the DA-50 to sweeten the deal. Both amps sound exceptional with a wide variety of modern British tones from sparkling cleans to incredibly saturated lead, and rhythm sounds with a ton of low end regardless of which amp you go for. The DA-50 is obviously the more chunky sounding of the two thanks to the extra thump provided by the EL34 power section, but the DA-20 is no slouch in that department either and should provide plenty of trouser flapping action through a good 4x12 or oversized 2x12 cab.

Both amps feature superb, handmade build quality using high-end materials such as Sheffield Steel, environmentally sustainable wood sources and military-grade electronic components. As such, they feel as good as they sound and are priced in a very refreshing way given the cost of other similarly spec'd boutique or handmade amps in this category. Neither will break the bank considering what's on offer here and are a superb way to get phenomenal tones in your arsenal without sacrificing build quality, components or features—highly recommended!