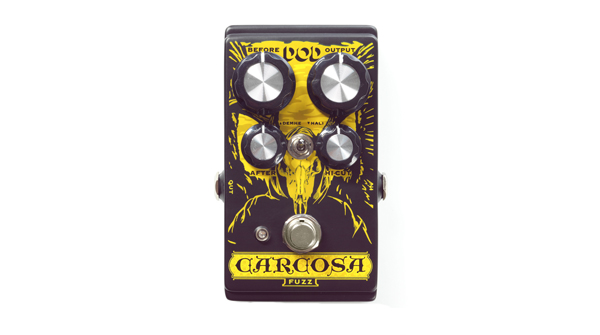 Playing around with the Before and After controls you can get some truly outrageous sounds that bought a childish grin to my face.

Lewis Turner goes in search of the ultimate Fuzz pedal.

When I think Fuzz I think Hendrix! It's a tricky effect to tame that, depending on how good it is or who’s using it, can either sound very cool, or truly horrific. In this review we are taking a look at the Carcosa Fuzz pedal from Dod. Dod first appeared in 1973, long before the term 'boutique pedal' meant anything, and was formed by two friends trying to make some extra cash between gigs. Their pedals were a massive hit and now the Dod brand is part of the giant Harman audio group which itself has recently been swallowed-up by Samsung. Strange to think it started out as one of the first boutique brands!

And so to Dod's brand new Carcosa Fuzz, which is designed to be used with either a clean or dirty set-up, thanks to its dual voicing, controlled by a small toggle switch in the centre of the pedal. The two settings have silly names (sorry Dod): DEMHE the up position giving a bass and low-mid boost which works great for clean channel usage. The HALI voicing (down position) offers a bass cut that works well on a dirty channel. The other controls are pretty straightforward, but again slightly confusing due to the 'quirky' names they have been given. Before – Increases/Decreases the amount of fuzz, basically a gain control. Output – changes the overall output level, and can also be used as a boost as there is a lot of level. After – Bias control changes the texture of the fuzz, from loud woody fuzz tones to splatty broken fuzz tones and everything in between. Hi-Cut – Reduces the amount of high frequency detail, ideal if you are changing between different guitars that may have brighter or darker pickups.

A normal footswitch control with LED, along with standard jack in and outs, 9v battery or power supply, means this pedal will fit onto your existing pedal board with no issues. It's a cool looking pedal which will no doubt attract the 'Hey dude, what does that one do?!' comment.

In use the Carcosa is actually far easier to play around with than to explain. All the controls make sense once you start to use them. The voicing control is a great idea as it means no matter what the amp setting, your fuzz tone will always cut through. In fact that is a big part of this analogue pedal's attraction. Fuzz tones can easily get lost in the mix, especially if playing in a band situation, where it can just end up sounding like muddy fizz. Thanks to the overall voicing of the Carcosa however and the various controls there are no problems in this area, even when dialling in the most extreme fuzz tones the notes still cut through.

Playing around with the Before and After controls you can get some truly outrageous sounds that bought a childish grin to my face. Bringing them back to something more 'usable' produced a fine Fuzz sound. And that is my issue really - it was just fine. It didn’t really set my world on fire, nor inspire, nor did it make me sound like Hendrix (and that must be the pedal's fault...). For all its clever controls and voicings, it just left me a bit cold and lacking a bit of heart. Don’t get me wrong, it's a great pedal that does exactly what it says, but for me it doesn’t quite have that vintage sound that I hear in my head. On the other hand, if you are looking for a fuzz pedal that does loads of different sounds in the fuzz world then you won’t find better than this. Listen to the video then if you like what you hear (and you well might) audition one for yourself. By the way, it's also well priced for a top brand.