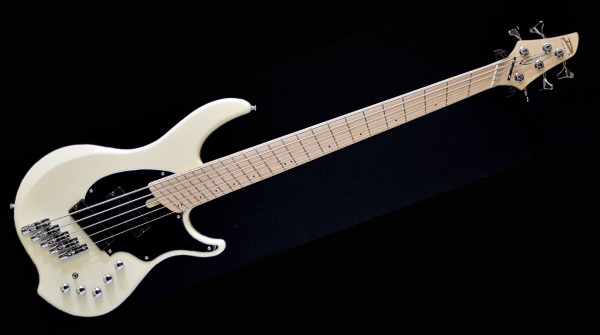 Well, what a treat we have this time around! This is the latest iteration of the Combustion bass from the Canadian manufacturers of high end instruments, Dingwall Designer Guitars. The first version of the Combustion was a fantastic bass but the new instruments promise to bring us extra refinements in playing comfort as well as improvements in tone, adding up to a pretty much unbeatable package. That's the theory, at any rate!

Dingwall basses like the AB models, Lee Sklar signature instruments and Prima Artist basses, are made in Canada by Sheldon Dingwall and his team of highly skilled craftsmen. The Combustion however, also built by highly skilled workforce, is actually manufactured in China. The EMG preamp, Dingwall pickups and the rest of the hardware is shipped out to the Far East where the basses are assembled and then sent back to Dingwall HQ for a full set up and thorough check-up before being sent out.

To start with, the bass, like all Dingwalls, has a very striking appearance. It might, or might not, meet with your personal approval but no one is going to think you're playing a Precision copy when you turn up with one of these! Our sample came with a white finish on the alder body, but there are other options available and for those who like a translucent finish, then you’ll have the option of having a Swamp Ash bodied instrument.

It's tempting to go straight on to the thing that will have caught most payers’ eyes when they saw the pictures of this bass - the fan fretting, but let's just give a passing mention to the hardware first, as it is important.

First, the open gear tuning keys, which are smooth, light and accurate, so top marks there. The body itself, meanwhile, is sculpted with deep cutaways making the instrument feel comfortable either in seated or standing position. Electronics come courtesy of EMG for the 18v ore-amplifier that offers up cut and boost for bass, midrange and treble frequencies. There’s also a master bypass switch too, which is handy for switching between tone styles. Dingwall doesn’t scrimp on pickups and this machine has the company's own FD3n Neodymium pickups on board. Dingwall uses CTS pots and there’s a great inclusion with the pickup selector. There's no pan control, but instead a four position switch giving access to each pickup individually or both in parallel as well as both in series. The difference in tone is marked; I love the series setting on this long scale bass. It just sounds massive, it really does!

So, on to the Combustion's neck - at last! - which presents a wonderful expanse of pale coloured five-piece maple neck with a maple fretboard. It's bolted on using inset bolts to the body and on this version provides access to the truss rod adjuster from the body end. All combustion basses except for the signature ‘NG-2’ models have a Rosewood fingerboard option too. The Maple fingerboard according to the spec here has ‘rolled edges’ and they are super comfortable. This is a nice touch which makes the neck appear smooth and have an almost ‘played in’ feel in the hand.

Finally to the fretwork! Back in GI 8 I reviewed the Dingwall ABZ 6 and covered the Novax Fan Fret system in detail, but to give you the edited highlights, the ‘wonky frets’ approach isn’t a gimmick and, if you’ve ever seen inside a grand piano before, you’ll know it makes sense before finishing the end of this sentence! The fanned out frets allow the lower strings to be progressively longer from bridge to nut the lower the note pitches they carry. The B string for example is a 37” beast, way longer than the average 34” scale ‘parallel fretted’ basses we see on the market all the time. The G remains at 34”. Advantages? Tension between strings is evened out and I love how the strings feel under the fingers. Each is firm and balanced when switching between them. Oh, and those low notes! The open strings have superb definition. Don’t mistake this as being ‘more bassy’ though. Using my grand piano analogy, notes have girth and body to them rich in overtones rather than being wooly and less coherent (often a problem on some five string basses with problematic B string.) How is it to play fanned frets? In short, it looks daunting but really, it isn’t! so try one and find out for yourself.

Summing up, I am actually going to score this bass higher than the ABZ6 reviewed for one reason - it's just such fantastic value for money. Both Digwall basses are great - but at the price this one is a steal.