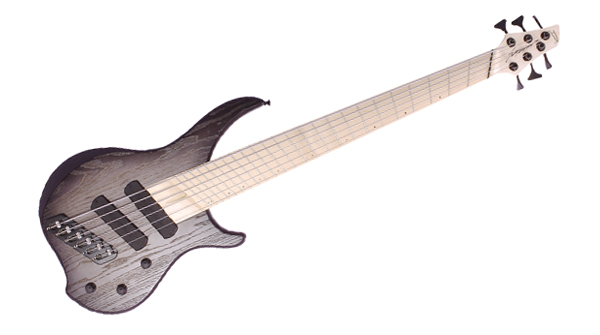 It seems to me that every month I have a (somewhat geeky) conversation with iGuitar's editor Gary Cooper about what exciting gear will be coming up for review in future issues and there has always been at least one item I am thrilled at the thought of getting my paws on. Last month I was flabbergasted at the brilliant Yamaha NE2, the Nathan East signature 5 string. I figured it was going to be hard to beat. Then the spec of the following bundle of joy appeared in my inbox from Mark Stickley at Bass Direct, here in the UK, who was kindly offering to lend us a Dingwall Afterburner ABZ 6 string bass - made in Canada by Dingwall Guitars, owned by Sheldon Dingwall. I'd actually played a few fan fretted Dingwall basses in the past, but this is the first time I have ever had an opportunity to dig in and really get to know the instrument a bit more.

So let's take a closer look at the specification. Immediately your eye is drawn to the obvious difference visually with Dingwall basses. They incorporate the 'Novax Fan Fret System' - a scale length method developed by Ralph Novak. What's that I hear you say? Much like a grand piano, each string has an optimal scale length for best tension and tone. Lower tuned strings in a piano are longer and according to Sheldon Dingwall when explaining the fan fret system, a string closer to its ideal length will have a brighter tone. This is certainly true if you were to compare short scale instruments with longer scaled counterparts, indeed it's a well known fact taken in to account when comparing Les Paul guitars with Stratocaster guitars tonally. Thus each string is arranged so that the bridge and nut are at opposing angles, allowing the B string to be longer in comparison to the higher strings - in this case this six string model is standard tuned B to C. The scale length for the B is a huge 37" coming down to just under that of a standard P bass at 33 ¼" for the high C string.

As for how the fan fret system ended up on Dingwall basses, Sheldon had originally seen a magazine review of another guitar featuring Novak's system and later met him at a convention. He suggested to Novak that the system might work well on basses and the rest, as they say, is history.

Moving away from the frets, the look of this beast of an instrument may make it seem like a rather daunting affair. As someone who has played six and seven string basses for many years, I needed little adjustment to my actual technique to play the bass comfortably - I just had to be a bit careful to begin with as I got used to moving from position to position. We shot the video fairly quickly after I picked up the instrument for the first time, so you can see how easy it was to acclimatise to the unusual fretboard layout. Whether that would be true if all you were used to were traditional four stringers, is less certain, of course.

Unplugged and on my lap it was immediately obvious that the bass had something to show off in terms of tone and sustain. We have other basses in the studio to compare and the ABZ 6 sounded clear and true against everything. The low B had a great fullness even when just played acoustically. The neck was a joy to handle and I especially liked the fingerboard carve. According to the details online it's of a compound radius, the neck profile itself being a 'medium C' carve. Either way, it was instantly comfortable. The string action was set to a comfortable height with no unwelcome buzzes from the frets. And speaking of frets, I'm not aware of playing a bass with banjo-sized frets before, but I have to say that I am converted! Absolutely brilliant! Up until now I've always preferred medium frets on my basses and that has just changed. The whole neck is maple, by the way - a very stable five piece laminate for the main shaft. The fingerboard is also maple for a bright and snappy attack.

The whole instrument is finished with satin polyurethane, the headstock is adorned with six custom Dingwall tuners made by Hipshot, while the body is two piece swamp ash. I love the way the grain has been left open for a tactile finish to the whole body. Finished in a 'blackburst' coating it really does look great with the glossy black hardware and 'soft touch' knobs. Yes, even the knobs are made in house for just the right styling to fit the instrument. There's real attention to detail here!

The experience only improved when I plugged in. Despite personally preferring active pickups and pre-amps, I can only report that the completely passive ABX sounded superb. Master volume and a single tone control flank the pickup selector - a four way switch. Check out the video review to hear how each setting has its own flavour. Starting counter clockwise you have a great biting bridge pickup soloed. In the next position both pickups are wired in parallel for a classic tonal configuration. For a fuller mid present sound position three is both pickups wired in series - boosting the output slightly. Finally up to the last switch position for a nice mellow almost P bass character that just begs you to roll the tone control back a little bit for some vintage love!

There are times when words just aren't enough so, again - please check the video!

OK, so this is a premium instrument with a premium price tag. I've been lucky enough to play instruments with high price tags in this and the previous issue but there is a reason why basses like this fabulous Dingwall and the custom shop Yamaha I was raving about last month, are so expensive: put simply - they're worth it. And, anyway, the asking price of this stunning Dingwall is less than you can pay for a US-made Fender Precision (at least, it is in the UK), so by that standard this is ridiculously good value for money.

This one nearly came home with me - I'll be sad to see it returning to Bass Direct.