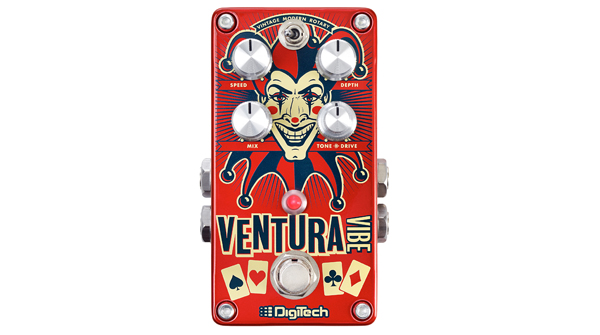 When a pedal comes along that gives you high quality UniVibe, rotary speaker and pitch vibrato effects all in a regular sized pedal, I can't help but be interested and that's exactly what DigiTech has done with the new Ventura Vibe. It has these three iconic and extremely musical effects all in one box. It can run in stereo or mono, is true bypass with a single foot switch which not only engages the pedal, but speeds the effect up and down, much like the two speed sounds on a Leslie cabinet when it’s set to the Rotary setting. This fast and slow function also sounds musical with the UniVibe and vibrato setting. There is even a little drive to be had from the dual tone and drive pot, where you can add grit and harmonic distortion to your sound as if you were pushing a growling spinning Leslie cab. DigiTech has thought of everything.

Whether we know it or not, we all love the sound of a good UniVibe. It's reminiscent of Hendrix and Trower in their prime, it's just a fantastic sounding effect that is hard to get tired of. I do suggest that you use with taste and sparingly, because any toy used too much just becomes tiresome and loses its appeal pretty quickly, but DigiTech have got it right on this pedal and you can fine tune it with the onboard speed, depth and mix functions. No matter how you set it, it instantly sounds cool. You also have the stereo option too, and with two amps the sound becomes huge and swirls around you, making the simplest of playing sound epic.

The Rotary setting, meanwhile, gives you instant Leslie cabinet. If you don't know what a Leslie cab does then you haven't realised that you have heard it countless times by the many Hammond organ sounds that lie in your music collection. The late John Lord of Deep Purple springs to mind for the growl, and any '70s Clapton album will do for the sweetness. Basically this effect simulates a huge speaker cabinet that has high and low separate speakers that spin at different speeds, creating the characteristic Rotary effect, which happens to sound fantastic for guitar as well as Hammond organ. The drive function on the pedal adds the John Lord valve growl if you want it and is just a fantastic feature to have on this type of pedal.

The Vibrato effect is probably the part of the pedal that will get used the least, although I love it. There was a very rare Boss vibrato that was produced for a limited time in the very early '80s and it is now extremely collectible, and I have been trying to find one for years. The Ventura Vibe basically recreates that effect, and probably does it way better than the original. The actual effect is similar to you giving a slight or big shimmer on a guitar with a whammy bar. It changes the pitch above and below the natural in tune note. I naturally create this sound with a whammy bar anyway, but in some sessions I've had in the past, and all over my album, I have used the vibrato effect mixed with delay, reverb, chorus and sometimes even pitch shift to give this ethereal choral keyboard sound. If you are interested, check out my track 'Unearthed' for all the atmospheric guitar in the background. That sound comes largely from Vibrato chorus and delay. So if you do invest in one of these pedals, don't ignore the Vibrato function, because that's a sound that will get other guitarists asking you how you got it!

DigiTech has also created a nice, unique selling point by being what I think is the only company to offer a little rubber 'stomplock' which is a protector for your favourite settings. This slips over the front of the pedal and stops you accidentally moving your setting with your foot. Not very likely to happen but it's a nice touch. As I say, the company seems to have thought of everything!

I own few DigiTech pedals already from their 'Hardwire' range and they are superb. My only niggle with this pedal is that it has some kind of clown or joker graphic on the front. I hope I'm not the only one that finds clowns a little scary or creepy, but as long as I don't look at the pedal too much, I love it in every way!