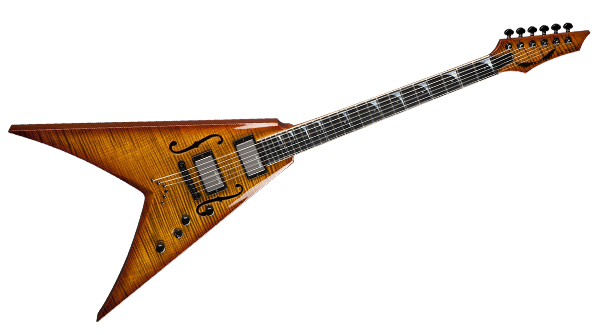 Dean Guitars are the Marmite of the electric guitar world; loved and adored by a legion of metal guitarists but equally disliked by conservative players and gear snobs who sneer at their signature ML and Razorback designs and the attention-grabbing paint jobs as overly-flashy gimmicks. With this in mind, they seem the perfect company to endorse the man most easily-comparable to a polarising sandwich spread in heavy metal, Dave Mustaine of legendary thrashers Megadeth.

Mustaine has long been a controversial figure, with his unquestionable skill and genre-defining back catalogue frequently overshadowed by his outspoken religious and political views. One of his latest ventures was a performance with the San Diego Symphony Orchestra towards the end of 2014, in which he performed works by classical composers including Wagner, Vivaldi and Bach on electric guitar backed by the full orchestra. Titled ‘Symphony Interrupted’, the show was widely panned as a disaster of hitherto-unseen proportions and has been quickly swept under the carpet, where I presume it’ll remain for the rest of Megadeth’s career.

The story might have ended there, were it not for the fact that the gig also spawned this remarkable guitar, which is an extremely limited edition model (our review sample was number 20 of 50 made, hand signed and numbered by the man himself). It was produced by Dean’s USA custom shop exclusively for the show, and as such no expense has been spared on the materials, construction and finish of the instrument.

On opening the quality hardcase included with the Stradi VMNT for the first time, my initial impression was relief that at least some good had come from Dave’s experiment with a symphony orchestra. The Stradi VMNT is quite simply one of the most visually stunning guitars I’ve ever had the pleasure of playing. The F-holes of the semi-hollow design, combined with the Vintage Burst finish over a flamed maple top give the perfect nod to the classical instruments this guitar was inspired by, whilst the signature Mustaine V shape and Dean headstock retain the VMNT’s metal credentials. While V shape guitars are polarising in themselves and obviously not for everyone, even the least Metal of GI staff members were forced to admit that this is an aesthetically magnificent instrument.

Aside from the flamed maple arch top and matching headstock cap, the guitar's body and neck are built from premium quality mahogany using a set neck construction. The guitar also features a jet black ebony fretboard and black hardware including Grover machine heads and a Tune-O-Matic string through bridge. The neck, a 3-piece construction with Mustaine’s own D-shaped specification, is unbelievably comfortable, with the slightly flatter ‘spine’ along the center of the back of the neck perfect for resting the fretting hand thumb and combining with a slightly beefier-than-expected neck to create an absolutely sublime playing experience.

As expected from the semi-hollow design, the VMNT was noticeably louder and resonant when played unplugged in comparison to typical solid body Vs, but it was when plugged in and cranked that the guitar came alive.

The Dean features two Seymour Duncan Live Wire active pickups, the signature Dave Mustaine pickups that purportedly ‘provide the benefits of an active pickup without sacrificing the organic ‘Seymourized’ tone’. Throughout my time with this guitar I thoroughly tested these pickups, focusing on their effectiveness when used with the overdriven through to high gain sounds that this guitar would obviously be used for. I found them to be excellent, giving a defined and articulate response with great clarity when played through modern gain lead tones and delivering an impressive punch when played with more traditional overdrive sounds. My initial worries about feedback due to the semi-hollow design were laid to rest, as there were really no such issues present with this instrument.

The clean tones from these pickups were also suitably impressive, obviously aided by the semi-hollow design to achieve more resonant and full clean sounds than many Metal guitars are capable of. The controls comprise two volume knobs, one for each pickup, as well as a universal tone control and 3-way pickup selector switch. Two volume knob configurations are typically an invitation for rolled-off clean tones, as many Metal guitarists will turn neck volume knobs right down to create clean sounds from an overdriven amp and then use the 3-way pickup switch to go between the two sounds, and this was a satisfying option here; the Live Wires clean-up spectacularly when their outputs are reduced by their volume knobs and really do seem a cut above much of their competition when used in this way.

Although a lot of these features are relevantly common in the world of Heavy Metal guitar, the thing that really sets this instrument apart is Dean’s attention to detail. The fretboard and fret edges are bound with highly figured flamed maple, possibly the most beautiful fretboard binding I’ve ever seen, whilst the pearl sharktooth/dot inlays are the perfect size and inlaid immaculately. Overall the fit and finish of the guitar is beyond perfect, with recessed Dunlop strap locks, a 9V battery compartment and an upward slanting input jack all adding convenience and a feeling that every inch of this guitar has been carefully planned and tested to make sure it’s the perfect instrument.

The guitar is also extremely well balanced when played either sitting down or standing up with a strap. Although V designs are often thought of to be impractical and uncomfortable, this couldn’t be further from the case with the Stradi VMNT. In either position the instrument is supremely comfortable and naturally angles the fretboard upwards into an almost classical position which if anything will force many Metal guitarists with typically slouchy playing postures to improve their technique.

Overall this guitar is a triumph then, and Dean has once again put its detractors in their place. I’ve had experience of several of Dean's USA models in the past, including several Mustaine Vs, and I’ve never been disappointed, though I have to conclude that this is the best instrument I’ve come across yet from the Dean Custom Shop.

This level of quality and craftsmanship obviously doesn’t come cheap and the price will be restrictive for all but the most serious Metal guitar collectors, but that doesn’t detract from the fact that this is an absolutely faultless Heavy Metal guitar. Although it will forever be associated with a show that many Megadeth fans would rather forget, I can see great potential for this as an instrument for any serious neo-classical Metal guitarist who might wish to redefine it as possibly the most appropriate instrument ever made for that genre, or, on the other hand, for any player that simply wants to own undoubtedly one of the greatest V-shape guitars ever produced. And even better news? Apparently, Dean has a lower cost import version on the way for Summer 2015!