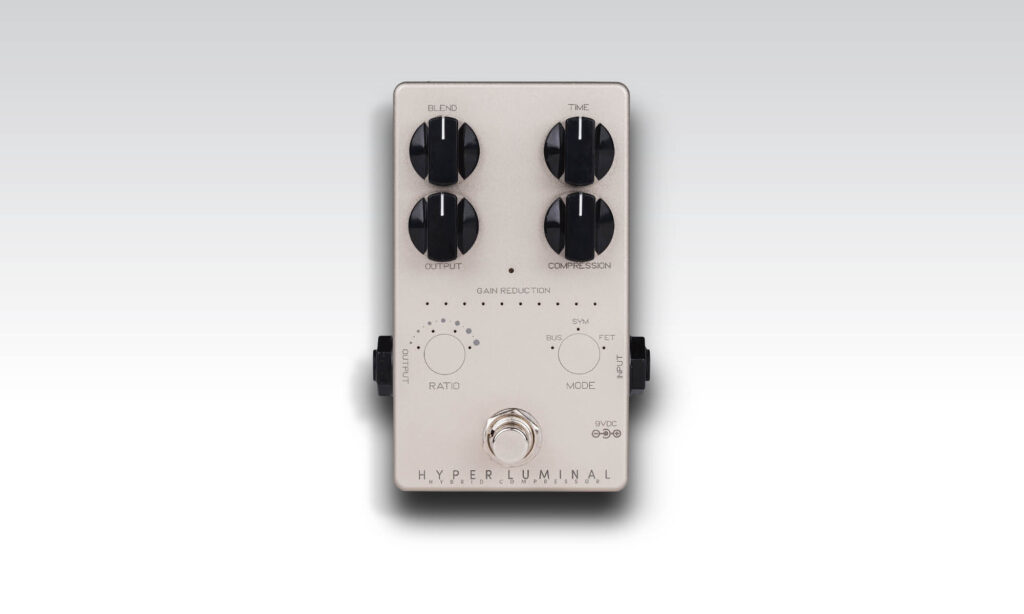 Celebrating EA’s 35th anniversary at the time of releasing the NL112, the company have been enjoying a shift “back to their roots”. Hence the design facelift featuring brown tolex, leather handle and a new name plate, all adds up to a rather prestige package!

Simple on the outside, advanced on the inside

Will knock most other comps’ off your board!

Dan Veall is back once again with another review in Guitar Interactive's Bassment, setting his sights on Darkglass' Hyper Luminal Compressor Pedal. Let's see what the 'hype' is all about.

We have certainly covered Darkglass as a company in detail in previous reviews in Guitar Interactive. So I apologise if I dip straight into the review here, we have much to cover! You can check out those reviews via the magazine website!

I feel this is a really interesting piece to cover. I am so used to seeing the “analogue versus digital” debate online. Forums and social media pages are overflowing with opinions on what is best and why. “Digital sounds cold and sterile”, “Analogue is limited”, “the two never work together “and countless other discussions get heated over what should wear the tone crown.

Well, what if, in a parallel universe, those two “polar opposites” were to come together in a best-of-both-worlds union that actually worked for both parties?

I should pepper this opener with my own opinion: I’m open-minded. I see the benefits of both technologies and all in between. I’m not going to try to change anyone's minds, but I certainly want to get into the details of the Hyper Luminal. It is a hybrid design compressor. It features both analogue and digital circuitry. It is an analogue signal path end-to-end and is known as a VCA (Voltage Controlled Amplifier) compressor. It uses a control signal topology shall we say, for the various effect parameters in which to deliver predictable and repeatable results. I am over-simplifying here, otherwise, it would make for a very long review in explanation alone!

So where does the digital side of this effect come in? Well, a digital processor on board governs the control signals and how they affect each of the parameters that you would usually find on a compressor, for example Attack, Sustain, Compression (Threshold) and Ratio. That’s not all! If you can control those functions, then you can not only decide how much say, compression to apply, but start to emulate the way that famous compressors out there behave when doing that too. The very characteristics that make people love a particular studio compressor over another for a specific job.

Darkglass know that too, so they have “modelled” the behaviour of two famous devices into the Hyper Luminal. Whilst doing that, a third compressor, their very own Super Symmetry has also been included if the first two weren’t already enough!

The inclusion of Digital Signal Processing, that I will refer to as DSP from now on has its advantages. Complicated electronics that would otherwise force this compressor to be much, much bigger can be shrunk down into a central controller. Modern DSP is more advanced, accurate and less ‘clunky’ than processors of yesteryear. Indeed, just progress itself has meant that engineers have invested a great deal of time in the design of complex algorithms. Analogy? Well, you only have to compare the first smart-phone you ever owned to the latest offerings to see how much better they are. Guitar effects have enjoyed the same advances.

Speaking of advances, well, like many effects processors out there today, Hyper Luminal has a USB connection. If you aren’t completely happy with the parameters factory set by Darkglass, you can download their free “Darkglass Suite” and instantly access extra under-bonnet functionality via a computer. I used my trusty ole laptop in the review.

It’s over to my video where I endeavoured to demonstrate some of the features. I am sorry there were some I had to leave out in the video either because of time or the difficulties with the medium of ‘online compressed video’ that makes it difficult to hear what is going on.

Lets cut to the chase though. Is the compressor good? YES. Is it reactive to changes in the signal? YES. Did I hear any extraneous noise or artefacts that are picked up in some devices? No, however, it would be physically impossible to make an analogue compressor dead silent (hiss) under high compression where the make-up gain is being pushed. It’s just the nature of the beast. Furthermore, my ole P bass is a bit sensitive to ambient electrical noise which heavy compression settings could emphasise, so beware! Not a fault of the pedal though!

In the video, I mention the onboard models that I have listed in the specifications. You may want to read up about those online, suffice to say, you can definitely tell the difference between each model once you are familiar with the way that compressors work. An excuse to fiddle? You bet!

Hyper Luminal’s controls I describe in the video that are very neat and tidy, out of the way of the end of a boot when engaging the effect via the foot switch. Which makes those touch panels for the Ratio and Mode (Model selection) such a good idea! Nothing to kick or bash! I wonder if we can have the 4 knobs mapped to touch sensors too in the future Darkglass? It’d be possible to save your favourite setting by default with no physical knobs?

Darkglass don’t “do” batteries for ecological reasons, so this, like the rest of the pedal range is a ‘pedal power’ effect only. Which is fine anyway as the DSP and electronics require a decent amount of juice which means you could be replacing batteries more often than you’d like anyway!

Rounding up then (fighting my temptation to want to elaborate more), Hyper Luminal is a very impressive compressor. I am a big fan of ‘Parallel Compression’, so the blend control is very welcome when it comes to my needs. The pedal is small, light (if you want to keep the overall weight down on your board) and the Gain Reduction LED strip is bright but not impinging, even when the lights were low. Oh, and they are blue. I like blue LEDs! 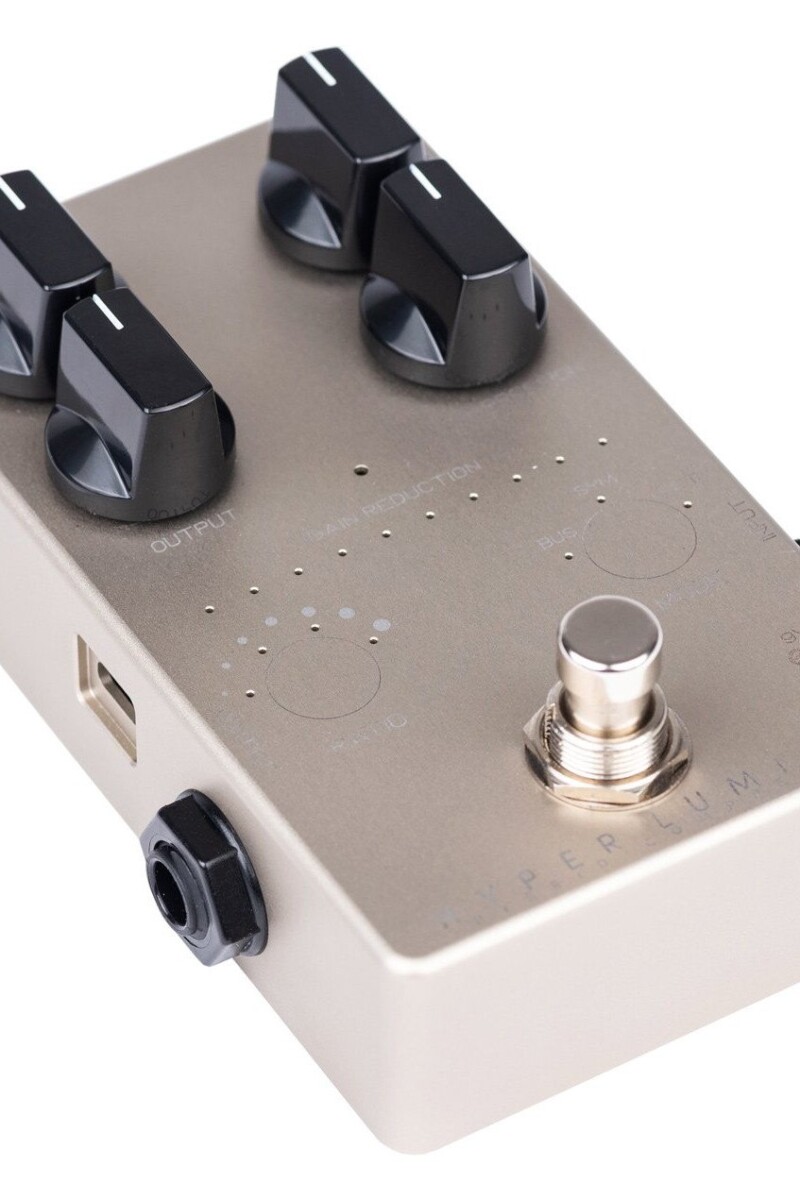 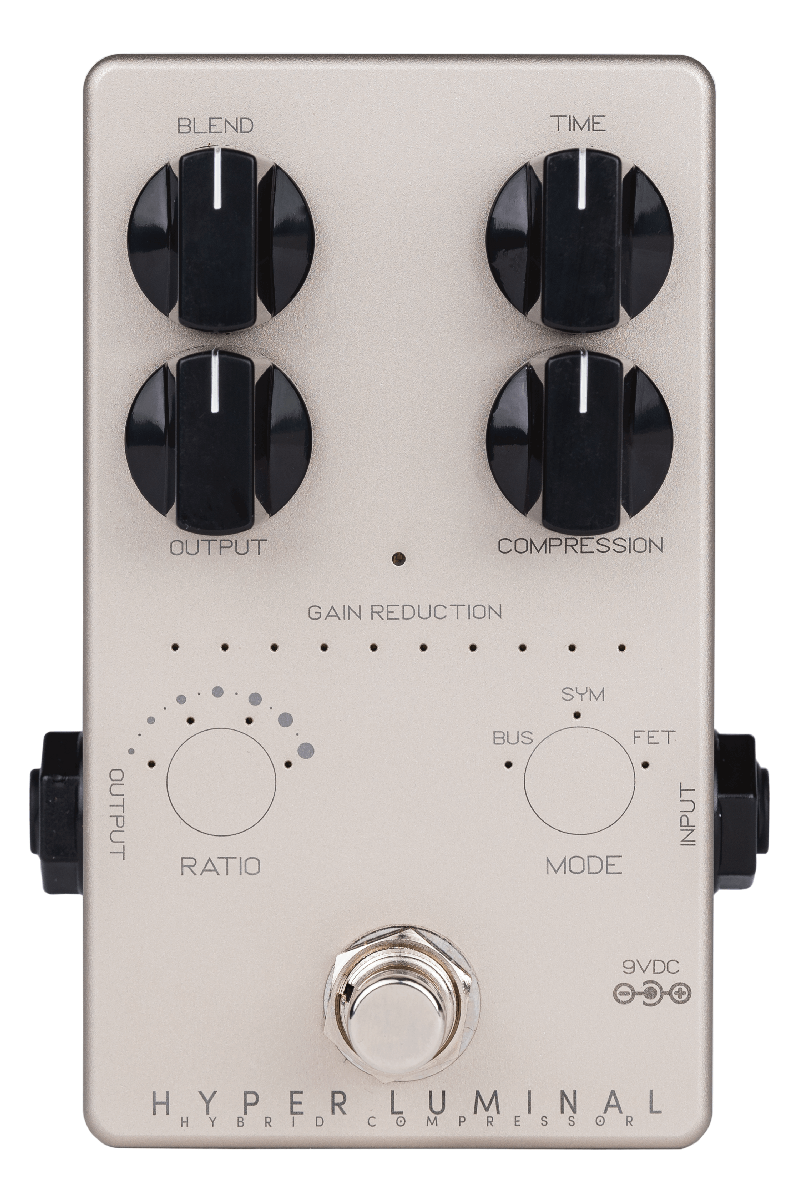