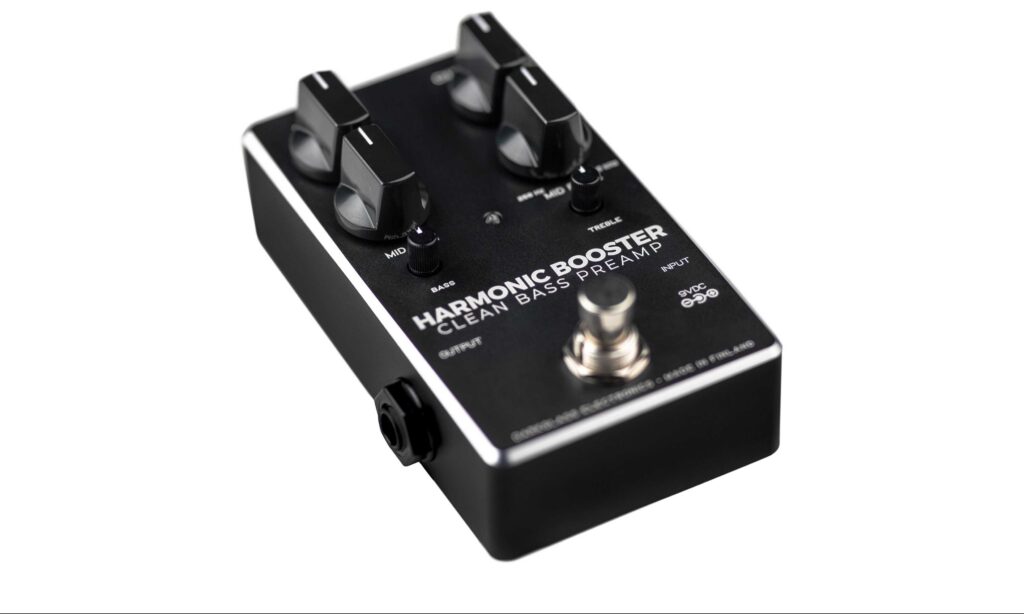 Designed to be the perfect complement to Darkglass' distortion circuits and boasting tremendous flexibility and portability, the Harmonic Booster could very well be the perfect one-stop solution for gigging musicians in search of a precise and harmonically rich clean preamplifier. Dan Veall tells us more.

As I understand it, when Douglas Castro began what has become one of the most exciting brands in bass across the world, one of his first pedals was in fact, an early inception of the Harmonic Booster that we are checking out here in this review.

Back with a facelift and bundled with some very handy features, this pedal has already proved to me that its uses are far wider-reaching than that of the description as a perfect complement to Darkglass' range of distortion pedals and amplification.

The panel features are dead easy to get your head around, and actually, the simplicity of the whole thing is deceptively luring you into thinking that the pedal may be a one-trick pony. That, it is not.

Anti-clockwise around the facia, we start with a clean boost / cut of 20dB for punching in for solos when the pedal is situated after your drive pedals, or for seriously driving saturation levels when placed before. That alone is a great feature to have on any pedalboard. Booster indeed!

Underneath the boost, Harmonic Booster features a low noise, high headroom three-band equaliser with a semi-parametric mid range control. Bass centred at 80Hz feels really good to me. Low enough that I can get some deepness to the tone, but high enough that the all-important punch is being serviced in the sound too.  I also like the Treble boost and cut being centred at 5Khz - which happens to be a great place to boost those harmonics on bass. Push this one up when placed in front of a distortion pedal, and you'll get extra saturation in the top end, allowing the low end to be left with less driven for extra clarity. Cool trick!

Whilst on the subject of tricks, check out my review video for a 'hack' I learned from guitarist David Maxim Micic who made a video placing an overdrive pedal in front of his audio interface, which in turn was running an amp' sim on his desktop. The mid-boost heavy Tube Screamer is well known for being able to tighten up the low end in high gain metal guitar tones (something I often use myself), but it actually works by sculpting the tone from your instrument into a DAW too. My point? You can do the same with the Harmonic Booster! Dial-in, this mids with the three-band, add some top-end bite, then feed into your favourite DAW plug-in. Watch my video for more thoughts on that one.  (Just be aware and keep an eye on your interface gain control, though!)

Rolling around back to the top of the controls and we have certainly the main feature of the Harmonic Booster in the shape of the character dial. In my video I try to describe what I feel the effect is as the knob is advanced - there's undoubtedly some perceived boosting of certain frequencies, and I can tell that some are being dipped out. For my passive P bass that I used specifically to see how far I could get away from its inherent tone, the overall effect was a more modern sound that would blend well in a laden guitar mix, but the accentuating of frequencies would certainly mean that there's still definition to each note. I have a plug-in on my DAW with a 'de-swamper' control on it. It's the sort of description I'd use for this character knob. It kinda makes bass "fit" in a mix sweet spot.

So, you get the idea! Having a powerful three-band equaliser and this progressive character control (rather than, say, a pre-shape button on an amplifier) is hugely beneficial. Running the pedal before a drive gives you boost options, running it post-chain, well, a superb EQ and clean boost - but as a stand-alone, what a great way to jettison your old school vintage bass sound into a hyper-active modern bass machine without cutting holes in your beloved! It's almost too easy a solution.

In my review video, I also suggest this might be a great way to travel light if you are an IEM user too. Dropping into a Dep' gig, the character control could be particularly useful in dialling an "amp" sound without the difficulties suffered when using in-house gear or "micing up" in an unusual environment.

I can see this pedal getting a lot of use in that respect.

The pedal is very versatile for all the reasons talked about above. It's good to once again see thought going into creating a pedal that really works for the bassist, and considering what it is and how useful it's worthy of your kit bag.