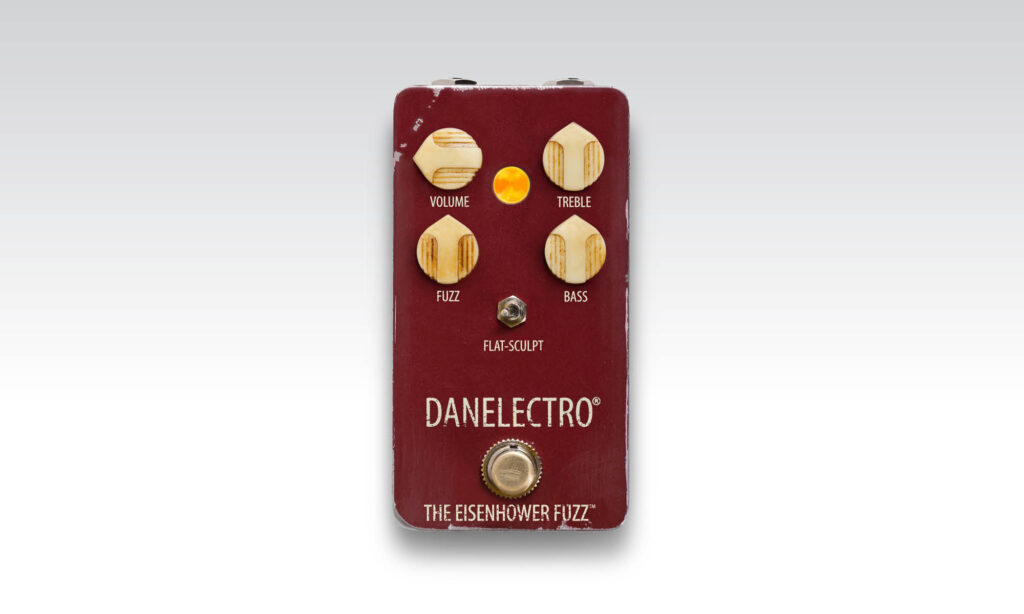 Gets on well with just about any amp.

“Relic” looks will turn some people off.

Danelectro has combined over the top fuzz with a super hot octave effect with The Eisenhower Fuzz Pedal. Rich harmonics with super “out front” octave. Plus, sculpt setting scoops mids and boosts bass for that outrageous “in your face” tone. Nick Jennison tells us more.

If like me, you grew up playing guitar in mid-90s and early 2000s, Danelectro pedals will likely hold a special place in your heart. Their kooky “food” series of pedals, with their 50s-inspired plastic enclosures and tiny price tags, were the first pedals many of us got our hands-on. They may have been cheap as chips (pardon the pun) and prone to falling apart underfoot, but they sounded surprisingly good!

Fast forward to 2019, and Danelectro are still making great-sounding pedals with unique retro aesthetics, but with the kind of build quality that could withstand half a century of use and abuse. Which is exactly how the new “Eisenhower Fuzz” looks: like it’s been kicked around on stages for fifty years.

Putting our opinions on relic gear aside for a moment, the Eisenhower is an octave-up fuzz pedal that takes it’s inspiration from the Univox/Shin-Ei Super Fuzz. Compared to the Roger Mayer Octavia, the Super Fuzz is significantly fatter and thicker sounding, and the octave up effect is a little more subtle. It’s still very reactive to your guitar’s pickup selector and tone controls, with darker settings producing a more pronounced “octave” effect, while brighter guitar sounds will yield more of a “textural” effect with a “tearing velcro” quality that I just adore.

There’s a pretty huge amount of gain in the Eisenhower that goes way beyond “vintage” levels of fuzz, but the texture and grind are so good that even the most extreme gain settings sound rich and full of character. Lower gain tones, by contrast, will work beautifully with a broken up amp, or feeding another pedal.

Speaking of working with amps, the tone sculpting features on the Eisenhower are extremely comprehensive. The “Flat/Sculpt” switch will take the tone from a very mid-heavy, vocal sound to a mid-scooped and aggressive tone reminiscent of those classic 90s muff tones. This switch is also ideal for matching the Eisenhower to your amp of choice. Scooped-sounding clean Fender amps will benefit from the midrange warmth of the “Flat” setting, while a more nasal Marshall or Orange clean channel is perfect for warming up the skinnier “Sculpt” setting. Similarly, running the “Flat” setting into a breaking up amp will keep things punchy and clear in a band mix. The treble and bass controls have a lot of range, so finding a “sweet spot” is very easy.

The Eisenhower Fuzz is a killer sounding octave fuzz that responds beautifully to your guitar’s controls. It’s huge tonal range means that whatever amp you’re using, you can dial a sound that sits perfectly. 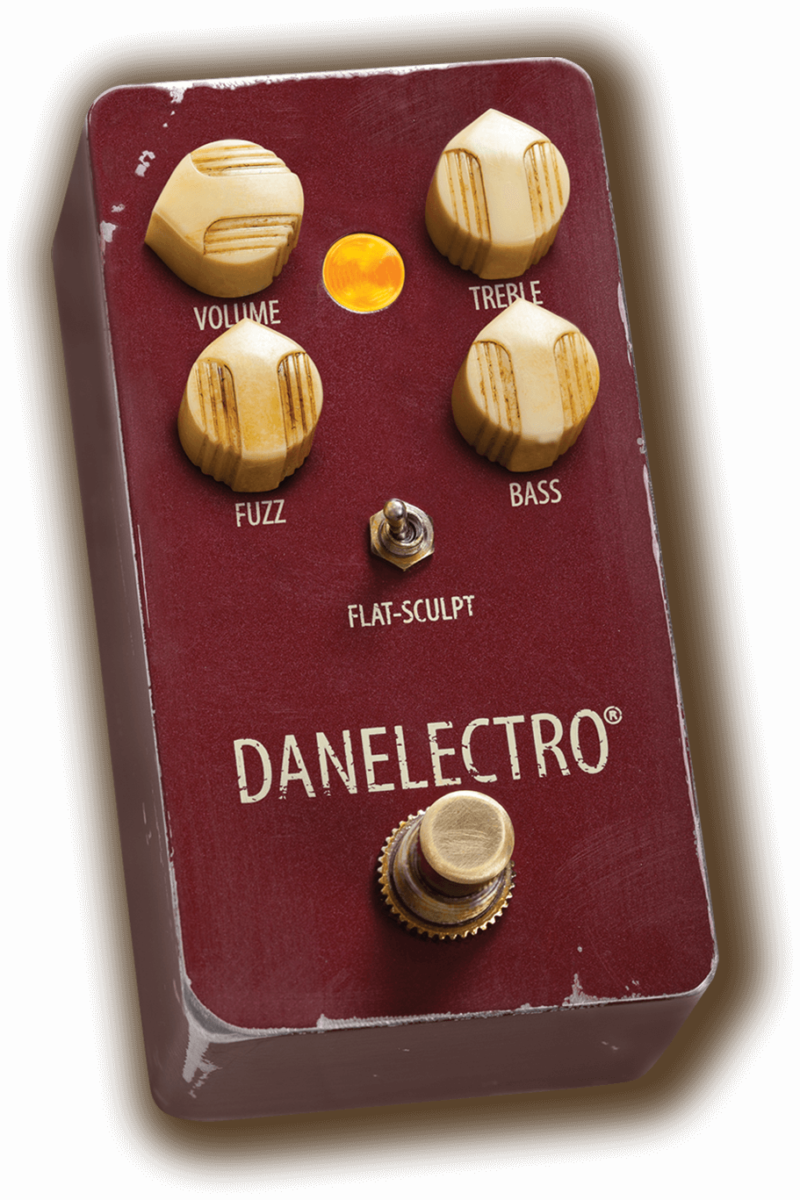 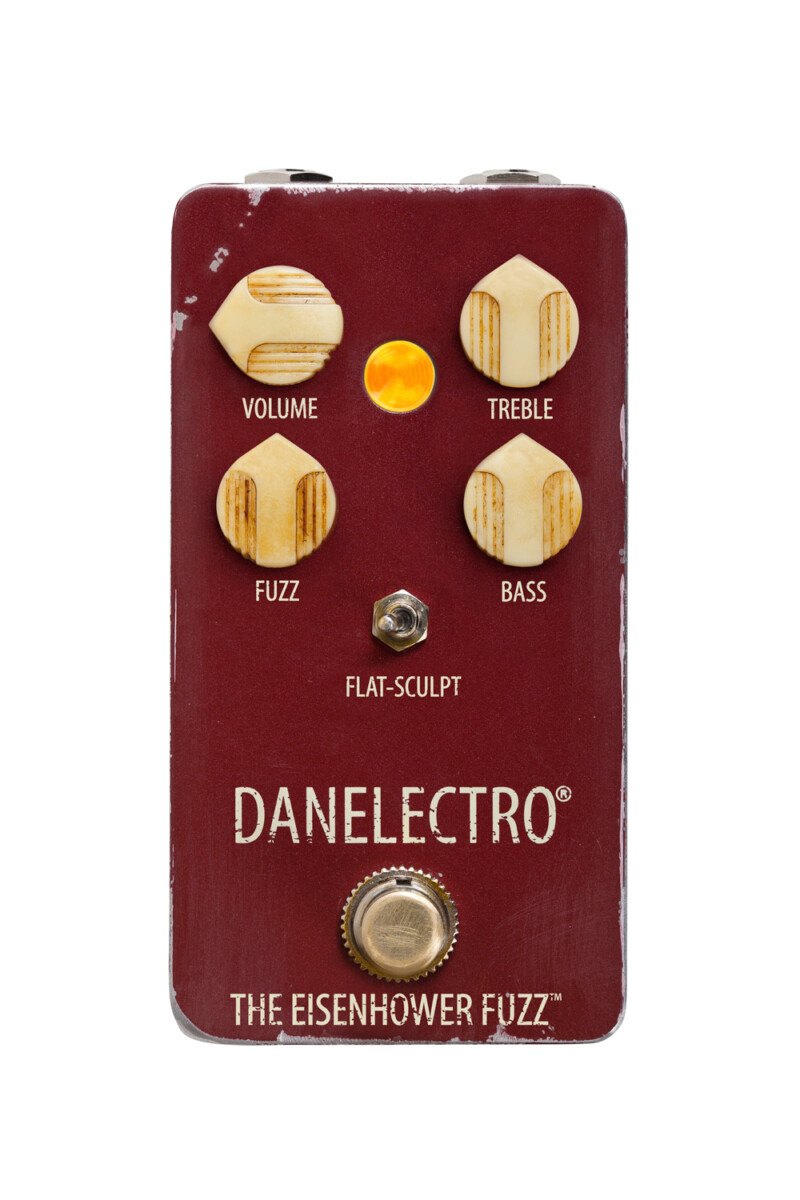