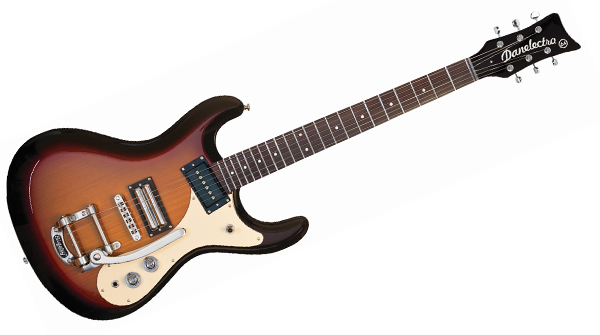 There are many hardcore Danelectro fans out there who will be excited about this latest release, the new Danelectro 64 that hits the stores celebrating 60 years of Dano history. Back in the day they were constructed simply of wood, vinyl, Masonite and Formica. Danelectros used 'Lipstick Tube' metal pick-ups, the cases of which were literally purchased from a lipstick-tube manufacturer! There's only one way to put it - they were cheap. Danelectro guitars were made simply, with no adornments or expensive woods. Despite that, they managed to achieve a cult status and have been seen on stage being used by players who could have afforded guitars costing twenty times more. Fast forward 60 + years and Danelectro still has a loyal following, mainly due to the distinctive sound and their retro looks. In this review we are taking a look at the all new Danelectro 64 to see if it really is a stellar reproduction of the 1960's classic. As always, be sure to check out the video to hear and see this guitar for yourself.

The 64 is a cool looking guitar, not a re-issued '60s model in fact, but pretty clearly modelled on a Mosrite from the early 1960s (think The Ventures). It sports a double cutaway offset horn shape, finished in a lovely deep sunburst, and of course that Bigsby trem system gives it that real retro look. Fit and finish throughout on our sample was excellent and it will certainly turn heads. Danelectro doesn’t specify what woods are used, but it isn't the usual hardboard (Masonite) and Formica formula and seems to be made of solid wood, though it is still extremely light, as a Dano should always be. The weight factor is not only good for saving your shoulders and back, it's also great for resonance and increased sustain. The traditional Dano headstock is quite a large affair making it slightly top heavy but the tuners are good and stable.

It's important to note that this model uses a “zero fret”. These were all the rage back in the '60s usually found on budget guitars as their use means there is no need to be so precise when cutting out the nut, making them less labour intensive to produce. That said, not only cheap guitars use zero frets - so do some of the most luxurious (like Vigier) and they seem to be increasingly appearing on higher end instruments over the past few years, the argument being that they give better tuning, intonation and action which in my experience is true, so it's a nice addition on the 64. The neck is a bolt on maple with a rosewood fingerboard (again, not stated so that's my best educated guess), 25”/ 635mm scale with 22 frets.

I found the fretboard and shape of the neck very comfortable to play, as was the action and spacing between frets, there was no buzzing or tuning issues anywhere on the guitar.  The Lipstick Alnico pickups are part of the Danelectro look and sound, I've always thought they were quite good and the ones on the 64 were no exception. On this guitar they have used two alongside each other to create a humbucker in the bridge, and whilst the neck pick up may look like another humbucker, it's actually a vintage style large housing a single coil.

A three way selector switch makes things nice, simple and obvious although this model does feature a little hidden trick with a push/pull tone control to split the bridge pickup. The only slight downside is that it can be a little tricky to use in action. All these options give you a guitar that is capable of many different tones, from biting crunch, to low cleans and quacky out of phase, there is plenty to please everyone.

As I mentioned earlier, this model features a Bigsby vibrato system, and a substantial bit of kit it is too! Now I like a whammy bar as much as the next guy and I'm not a fan of the whole locking system as I find they tend to get in my way and cause other issues. Although clearly not a locking system, I did find the Bigsby similarly quite intrusive on my right hand, making subtle use of it while playing quite tricky if it just isn’t at the right angle. In terms of action and tuning stability this one was fine and perfect for light chord shimmers or subtle vibrato, but maybe not for dive-bombing!  You could get used to it with time but I personally just found it a little uncomfortable for my playing position. On the other hand, there is no doubt that it adds to the vintage look and feel of this guitar!

I have played a few Danelectro guitars over the years and have always quite liked them. As with many people when I first played one I was a little dubious after reading the spec and approached it with a bit of a snobbish attitude, only to be pleasantly surprised with its rich a varied tone. The new 64 is no exception, in fact in terms of sound and playability, I would go as far as to say this is one of the best guitars they have put out for a long time. There is a downside, though. It's priced quite highly for what is generally regarded as a lower cost brand - in fact a brand that was built on its lower cost appeal. That's not to say that Danelectros can't start making more expensive guitars if they want to, just that its price came as a bit of a surprise. Still, try one out. You might be very pleasantly surprised by this easy to play, easy to wear, versatile sounding guitar that also happens to look very cool.