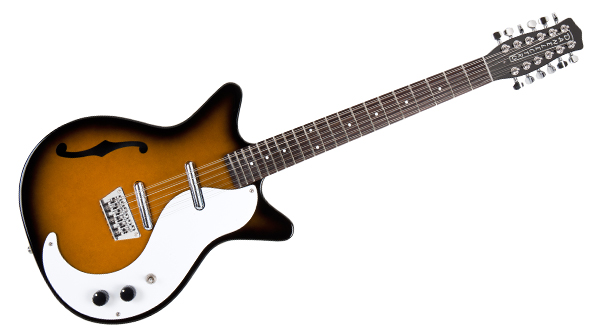 The very first Danelectro guitars were built at the beginning of 1954, designed to be starter instruments selling at very affordable prices. Brand new, the cheapest models back then cost as little as $69.00 and the most popular models came in a case with a built-in amplifier. Today that model, unmodified and in excellent condition, could cost you $500.00 or more. Because they were so cheap many Danelectros were damaged, altered or thrown away, but despite the image they also won many fans because of their unique looks and sound. Eventually, they even won collector status. And they were certainly different! Constructed of wood, vinyl, masonite (aka hardboard) and Formica, Danelectro never missed a trick to keep the prices down, even sourcing what was to become their trademark “Lipstick Tube” metal pick-up covers quite literally from a lipstick-tube manufacturer! The guitars were made simply, with no pearl adornments or expensive woods but for all that, many players loved them.

Recent years have seen a revival of the Danelectro brand with yet another generation coming along and taking a shine to a distinctive appearance and sound that is definitely not just another Fender or Gibson or a clone. Perhaps it's that 'alternative' aura that makes them so popular with Indie bands?

Anyway, among then new models for 2015 is the DC59 TSB-12 which is an electric 12-string, kindly sent down to us for review.. As always, be sure to check out the video to hear and see this guitar for yourself.

The TSB-12 is a cool looking instrument keeping to the traditional Danelectro style, but this model also features an f-hole, (which is always cool in my book...) making it a hollow body. As with all Danelectro guitars the body is made of laminated wood, making it extremely light. The headstock, which is a fairly large affair in order to accommodate all the tuning pegs, has six a side configuration with enclosed Kluson style tuners. Long term these may well be worth an upgrade. I didn’t have any problems with them during the time I played this guitar, but I can't see them lasting through a lot of hard use. The nut follows Danelectro tradition by being made of aluminium, which can be viewed in two ways. It's hard wearing so will last a long time, but some may argue that a traditional style nut gives better tone. I have to say that there was a bit of creaking and pinging from some of the stings in the nut as I played around with some string bends and vibrato, so again this could be worth a change if you were going to use one of these guitars a lot - and why not?

The neck is a bolt-on style made from maple with a rosewood fingerboard, offering a 25”/ 635mm scale with 21 frets. I found the fretboard and shape of the neck very comfortable to play as was the action and spacing between frets, there was no buzzing or tuning issues anywhere on the guitar, which is always very welcome on a 12-string! As I say, the TSB-12 has a masonite body with a laminated wood frame and the construction is hollow with solid centre core tape binding. It's so light that you could quite happily stand and play one of these all day long and not even notice it.

How does this construction affect tone? Well personally I prefer lighter guitars as they tend to resonate better. Yes, this is a cheap piece of wood, but don’t let that put you off. The tones achieved were both surprising and pleasing. The Lipstick Alnico pickups are part of the Danelectro look and sound, I've always thought they were quite good, the ones on this guitar were no exception. The middle selection that uses a little of both pickups, had a bell like quality to it, making it ideal for the jangly strummy sound that one might look for in a 12-string. The neck pickup was warm enough, but definitely lacked some bottom end, which could be down to the quality of the wood rather than the pickup. I did find the bridge pickup had a very low output which meant there was a big difference in volume when switching from the neck to bridge. Some players may like this but I personally prefer a little more continuity across the range. Still, tone-wise the bridge pickup was bright and sparkly as a good one should be, but just lacked that power to really cut through. The controls for the volume and tone are straightforward, although the knobs do feel rather flimsy. The hardware is chrome and the bridge is fully adjustable.

I have played a few Danelectro guitars over the years and have always quite liked them. As with many people when I first played one I was a little dubious after reading the specs and approached it with a bit of a snobbish attitude, only to be pleasantly surprised with its rich a varied tone. The DC59 TSB-12 is no exception. It does everything a great 12-string should, which is to deliver “that sound” - and it does it in a no frills way at a very pleasing price tag.

It looks great, sounds great and plays well. Yes some of the components are a little cheap, but they can always be upgraded at a later date. Most players don't use a 12-string all the time, which makes the DC59 particularly attractive at such a low price. For use on a couple of numbers in a set, or for occasional recording uses, it's a steal - particularly for a guitar that stands out from the crowd so well.