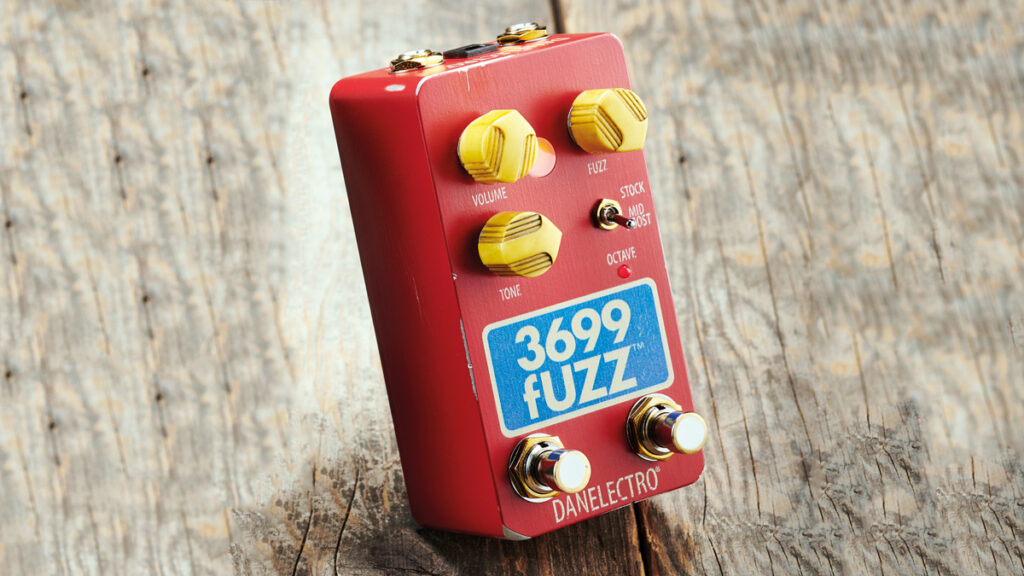 A revamp of Steve Ridinger's (Danelectro owner) FOXX Tone Machine from the 1970s, but with some major tweaks; The Danelectro 3699 Fuzz is one heck of a pedal. Featuring a significantly more pronounced octave (which is now footswitchable) and warmer overall tone than it's inspiration, Nick Jennison plugs in and basks in its velvety vintage tone in this review.

If you're a regular around these parts (and if you're new - welcome!) you'll know my deep and abiding love of fuzz. Aside from being the oldest and simplest effect guitar players have at our disposal, it's also one of the coolest for so many reasons. Metalheads and shredders may turn their noses up at the loose and uncouth nature of most fuzz pedals (I know I did in my youth!), but once you get a taste for it, it's hard to go back.

Danelectro turned my head last year with their exceptional Shin-Ei Super Fuzz inspired Eisenhower, a balanced and rich sounding take on an octave fuzz in a cool looking aged maroon enclosure. Their new 3699 follows in the Eisenhower's footsteps with a modern take on another octave fuzz classic - the FOXX Tone Machine. Arguably the most literally fuzzy of all fuzzes in it's a carpet-covered enclosure (hey, it was the '70s!), this legendary pedal found favour with artists as diverse as Parliament, ZZ Top and Peter Frampton. It was also Danelectro owner Steve Ridinger that was responsible for its creation, so it's only fitting that Danelectro bring it back for 2020 - with a few modern tweaks.

Sporting the same "relic'd" enclosure as the other pedals in the range, finished in a fetching shade of… Orange? Pink?… and bearing the last digits of the original FOXX telephone number (3699 spells "FOXX" on an old school analogue keypad), the 3699 is rugged and road-worthy. You won't have to worry about it getting beaten up, because it already looks like it's been around the block!

The controls are simple enough, with the same fuzz volume and tone controls as the original, along with two very important modern tweaks - a footswitch for the re-voiced "octave" circuit and a toggle switch to select "stock" or "mid boost" voicings. The 3699's overall voice is significantly warmer and fuller than the original Tone Machine, but it still retains the killer "furry" texture and tone thanks to the carefully selected NOS transistors.

The "stock" voicing is slightly scooped sounding and pretty raspy, but with the right amp, it can sound superb. Played through a warmer clean tone like an AC30's "normal" channel or the low treble input of a Plexi it's superb, but into a high headroom clean with an aggressive bright cap and a midrange scoop it'll take your face off. Luckily the "mid boost" voice sounds lush and full through these kinds of amplifiers, with enough vocal mid presence to really help you stand out in a mix.

The octave circuit has also been re-voiced to be more pronounced, with a searing high octave that sounds outrageously good for both psychedelic solos and thick chordal dirges. The fact that it's footswitchable is also a blessing, meaning you can kick it in when you want some screaming octave fuzz while still enjoying the meaty and rich tone of the "non-octave" setting.

Finally, there are a handful of functional updates that we take for granted in modern pedals: it's true bypass, and you can run it from a standard 9v power supply - two things you can't say about the originals. The 3699 is still a little sensitive to placement, and tends to be a little brighter and raspier when placed after a buffer, but unlike the original, it's still perfectly usable in this configuration.

The 3699 is a fantastic sounding recreation of an all-time classic. It sports a number of clever updates that improve just about everything about the pedal without sacrificing the tone of the original. If you're a fuzz fan, you need one of these in your collection!