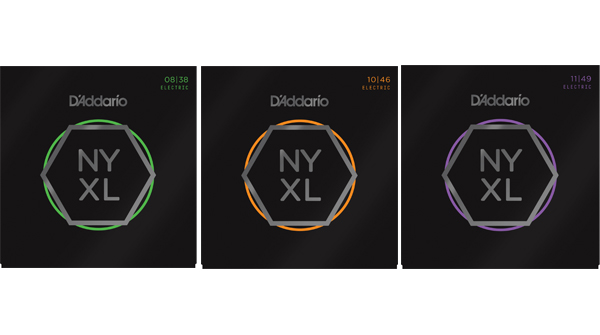 In the last issue of GI, I reviewed a new range of strings designed for acoustic guitar. I also posed the question, how often do you change your strings? And are you loyal to a particular brand? So the question for this review is: are you as particular when it comes to electric guitar strings? It's possibly easier to hear a difference with an acoustic guitar as its tone isn’t going to be masked by various other factors such as amps and effects. However, we all know how different your electric sounds with a nice fresh new set of strings on! And it gets particularly intriguing when you hear the claims being made for a new design of strings made by one of the very biggest in the business, D'Addario. Time to try a set of the new NYXLs!

I'm going to lay my cards on the table here and tell you that I have been a long time user of D'Addario strings for all my guitars. They are my manufacturer of choice. However, I have no endorsement deal with them and no prejudices either way. I'm happy with the XLs I've been using so I was very interested to see/hear how these new NYXL strings compare to the regular XL.

D'Addario claims the new strings bend further, sing louder and stay in tune better. Those three claims should be music to all guitarists' ears, and it gets even better because the maker also says they are the “Strongest guitar strings ever made”. These are bold statements and of course it would be impossible to test all these things in one short review session. Fortunately, I had a set sent to me a couple of weeks before I filmed the review video, to live with and to give some stick! I put them on the guitar I knew I would be using the most and set about bedding them in. They do feel different to the normal XL - a little more slinky and smooth. They're coated but they don’t feel drastically different or weird.

Tuning stability was fantastic right from the off, a couple of initial stretches when putting them on and it was plain sailing form there, even my best attempts at Gilmour style tone and a half bends didn’t shift their stability! They got a good amount of abuse in those two weeks, including sweaty gigs, and I purposely didn’t wipe them down after to see how they would last, and whether the tone would be affected. There was hardly any tarnishing at the end of those two weeks and the tone stayed consistently bright. I'm normally a bit pedantic about changing my strings, on average around once a week, but I would have been more than happy to leave them for another week or so. The only reason I did change them was to do the A-B test for the video review.

Doing a string review on camera is quite a tricky, as clearly you can’t tell how they feel and you are getting a secondhand sound once the original signal has been through various bits of technology and devices. I decided to use two of my Fender Strats that aren’t identical but as close as I could get to do a true A-B test. My standard American Strat had the new NYXLs on, while my Custom Shop Strat had the normal XL gauge 10 strings. Both guitars have the same pickups. Have a look at the video to see and hear them in action.

I noticed a difference in the studio and hopefully that difference comes through to you. String gauge is the same as the standard set of 10's. In a straight-up comparison, to my ears the NYs sound brighter, with better tonal consistency across the range, whilst also delivering more bite and punch. I also noticed a difference in output, this is probably due to the fact these new strings have 6% more magnetic permeability for higher output, essentially making them a little louder but still maintaining dynamic control.

As you will also see at the end of the video I give the NYs as much stick and abuse as possible, using big bends (my guitar actually choked out before the strings gave way) and general hard play. As mentioned above the strings were new on for this video review and after that over the top playing I would have expected some tuning issues, but there really weren’t any and I could have quite confidently carried on playing without any tuning concerns - and more importantly they didn’t break!

Having used these strings now regularly in anger I can happily say they are a big improvement on the standard XLs. Great tuning stability, tone, feel and durability. They are more expensive but you won't be replacing them as often so it ends up equalling out. D'Addario has managed to do that very rare thing of taking an already great product and finding a way of making it better, by changing some things that you or I would probably have never thought of. The standard XL strings are great, but if you really want to hear and feel a difference put a set of NYs on. You won’t be disappointed.