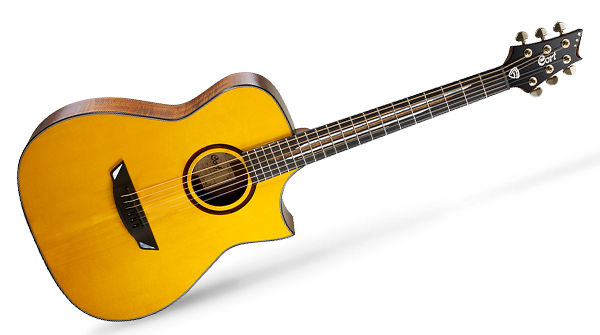 Frank Gambale is best known for his incredible electric playing, both as a solo artist and with some of the world’s top Fusion bands, but Frank is also an amazing acoustic player and has recently teamed up with Cort to produce his first signature acoustic guitar. This seems to be part of a renaissance at Cort, which has also picked up Mark Bellamy and Jeff Berlin as endorsers in recent years and which has introduced with some very impressive instruments.

The Luxe Frank Gambale Signature model is described by Cort as a ‘true signature guitar’ since Frank had genuine involvement in all of the guitar’s features throughout the design process from the choice of woods, electronics and set-up, all tweaked to Frank’s exacting specifications. The guitar even has elements designed by Frank himself and represents a genuine vision of an instrument that really is made for the artist in question, rather than a mass produced instrument that is rarely actually played by the guitarist involved.

The body and top are constructed from Australian flamed blackwood and solid Adirondack spruce respectively. The combination is unusual but Frank wanted something special that would represent Australia where he was born and raised, so the flamed blackwood was a perfect choice, having a gorgeous grain pattern and great sound. Frank also loves Adirondack spruce for its sound and grain so this was an obvious choice for the top. A solid mahogany neck is matched with an ebony fretboard for a classy look that feels very nice in the hands and is matched to an Art-Deco style inlay, also designed by Frank, running all the way down the neck. The Art-Deco theme is continued onto the headstock with a unique design sporting three diamond-style inlays, Cort and Gambale logos and classy chrome tuners. The body features and lovely, string-thru ebony bridge with mother of pearl inlays and a custom wooden rosette, enhancing the Art-Deco feel further. The smaller sized concert body shape and subtle but classy design touches, produce a guitar that is really pleasing to the eye and memorable in its deluxe hard case.

Frank had very specific set-up requirement on this guitar in order that it would suit his light touch and faster, economy picked style. The Luxe is shipped with a plain G-string and extra light strings for the ultimate in playability. Normally this would greatly affect the tone in favour of ease of use, but in this case Cort and Frank have worked together to produce a guitar that resonates very well and is exceptionally comfortable to play. The lighter set-up is more akin to an electric guitar in terms of playability and speed around the neck, but the tone is warm and impressive all the way up the neck giving the best of both worlds here - impressive stuff. The cutaway is generous, allowing easy access all the way up the neck, whilst not being too severe and spoiling the design.

The price point of this Luxe model is higher than the average Cort guitar and, as such, you get the premium build quality, fretwork and finishing on this instrument.  Everything feels very high quality, resulting in an acoustic that feels like very good value for money compared to many of the other signature models on the market at far higher prices, especially when you consider the inclusion of that excellent hard case.

Cort has included an L.R. Baggs EAS-VTC EQ pickup on the Frank Gambale Luxe. It’s a discrete body mounted system that mirrors the soundboard movement, rather than measuring direct string attack, resulting in a more dynamic sound that is more nuanced than traditional piezo set-ups. The volume and tone controls are mounted inside the sound hole for easy access without having to inset an ugly control panel on the top of the guitar. Plugged in, the tone is full of dynamics and sustain with a very musical range of control over the tone of the very natural acoustic sound. There is no compression or quack to speak of, resulting in a good representation of the actual sound of the guitar.

Played acoustically, you might think that the small body size and extra light strings would result in a small, boxy, weak tone, but this is absolutely not the case. The Luxe sounds warm and very consistent across its entire range with no ‘plinky’ or thin notes in the upper register. The bottom end is full for this size of guitar and there is a decent amount of volume pushing out from the sound hole.

Frank Gambale and Cort have achieved something very cool here with a guitar that plays, sounds and looks every bit deserving of such an incredible player. This is an excellent guitar in its own right and would be a great purchase for anyone looking for a superb playing and sounding acoustic that won’t break the bank but feels premium in all aspects. For the Gambale fans this is simply a must have guitar - it's superb!