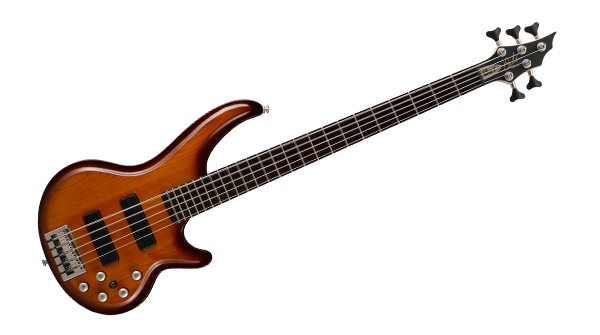 Cort is one of the most interesting Korean guitar and bass brands. Not prepared to be mere copyists, Cort clearly takes a pride in developing new ideas and is increasingly seen on professional stages as a result. We gave the NAMM 2012 award-winning Cort Curbow bass to Dan Veall for a full Bassment workout.

Last issue we had a really nice couple of reissue basses in the form of the Danelectro Longhorn and Aria SB1000RIB - two brand new versions of older classics. This time around, not a reissue but a superb update of a range of basses originally brought to you by legendary bass builder Greg Curbow, in collaboration with Cort Instruments. Cort, who are well known for manufacturing quality instruments at an accessible price, return with an updated instrument design featuring new electronics. They describe the instruments as having a 'great new feel and sound'. I'm inclined to agree!

The model reviewed here is the very tasty Cort Curbow 52 that won the 'best of show' bass award at NAMM 2012.

The instrument features a downsized body that feels snug in comparison to say a Precision bass. It's incredibly light in weight and sits on the knee comfortably. In my hands the five string neck feels very slim and fast. I'm a big fan of the 'closer' string spacings of my own custom basses and say, the likes of Ibanez 5 & 6 string basses, so for me this bass feels very familiar straight away. On the subject of string spacing, don't let anyone tell you that a close spacing is more difficult to play (for example slap style) it just takes a bit of adjustment to your playing style.

The neck is a three-piece laminate of Canadian hard maple, featuring a 15 3/4" rosewood fretboard dressed with 24 very tidy frets. These are large types, but on this neck feel just right.

Moving on swiftly to the body - as I said earlier, it's a smaller body than the 'usual' Precision type  designs and I like this. I think that if you are a young player or someone who is lucky enough to have a small figure, then this instrument will be a perfect fit for you. It won't however hide a beer belly! (Mine for example!) Again, the highly sculpted body is maple, described as 'soft maple' in the specification. The sculpting goes as far as the control knobs too. The three band EQ, Pan control and volume knob are all set deeper into the body, which I think is a really modern and nice touch. There's a switch to turn the EQ on and off too, which I think is a clever and useful addition.

The 'magic touch' comes when you realise that the pre-amplifier is hooked up directly to two Bartolini MK1-5 soapbars! This is significant when you realise that Bartolini pickups are absolutely top-end professional pickups. How Cort can afford to fit them on a bass selling for this price is beyond me! And the sound? Well, as you can hear on the video, it's pretty damn good! Clear and punchy and translating the great tone of the D'addario Pro Steels that are fitted to the Curbow models as standard.

The Curbow 52 instrument comes in two colour choices, a brown sunburst and black. Both look professional with the great looking platinum hardware. Did I mention that high mass quick release bridge? No? I just did! In great Facebook style, I'm 'clicking like' on that too!

The Cort Curbow isn't just one bass, either - in fact there is a small family of them, including four string and fretless versions, so there really should be a Curbow for just about any style.

So, let's round this one up - I like any company that challenges 'the norm' and by that I mean not regurgitating the same outline from the late '50s. The Curbow is a great bass - distinctive in every respect and with a fabulous sound. What's most amazing, however, is the price. Frankly, it's a steal and I expect these to be a huge hit in the coming year, now that supplies are arriving in the stores.