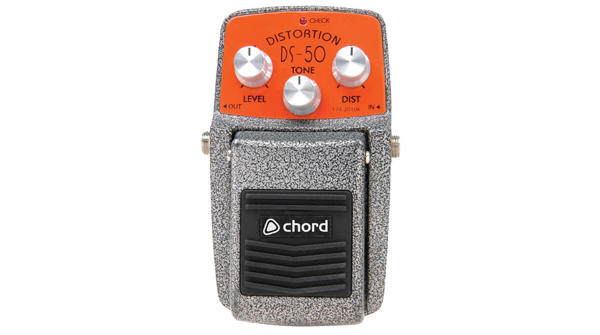 Life isn't all about vintage instruments and handmade amps - especially for beginners and those on tight budgets. But inexpensive gear doesn't have to be bad and newcomer Chord says its entry-level products punch far above their weight. Tim Slater volunteered to enter the ring with three new, highly affordable, Chord pedals.

Chord is a relatively new name on the scene but the company behind the brand is an experienced distributor which has recruited some key people who know what they need to do to establish it. The first thing, of course, is create highly affordable products of decent quality and among the batch of gear they dispatched to GI Towers were the three stomp boxes I'm reviewing here. At first sight they seem to offer a more than reasonable degree of build quality with sturdy metal cases and good, positive switches. In an age where stomp boxes are more popular than ever and with the effects pedal market dominated by expensive, up market, so-called ‘boutique’ (God, I hate that word!) brands, it is nice to find that the lower-priced end of the market still offers some genuinely good devices that allow guitarists to amass a collection of decent sounding meat-and-potatoes effects without worrying about breaking the bank. All three pedals reviewed feature 100% analogue buffered – as opposed to true bypass – circuitry, by the way.

Like its stable-mates the CH-50 chorus and DL-50 delay pedals, the DS-50 features a sturdy steel casing, non-slip rubber feet and a heavy-duty Boss-style treadle footswitch. The roadworthy feel is topped off by tough faux-Hammerite paint job and three large milled-steel rotary controls that adjust the overall volume, gain and tone.

Sound-wise the DS-50 does pretty much what it says on the tin, providing a very workable range of tones that run the full gamut from a valve-amp-on-the edge-of-breakup tingle to full on metallic crunch. There are specialist distortion boxes that span just about every conceivable musical genre one could name but there is still a lot to be said for a good all-round distortion pedal like the DS-50, whose sound and features appear to be fairly closely based on the ubiquitous Boss DS-1. Roll off the pedal’s tone control and the sound adopts a smooth, almost fusion-esque feel with plenty of sustain, roughening up into a classic British crunch when more treble is bought into play. Playing around with the gain and tone controls demonstrates that the DS-50’s gain pot seems to have an extra bit of kick towards the final part of its range, just before the pot hits the maximum gain. At this extreme setting there is a small, but nonetheless noticeable, gain boost, maybe not enough to qualify for modern blowtorch Metal tones but a very capable and powerful classic Rock distortion nevertheless.

Chorus - once among one of the most widely used guitar effects - now seems marginalised in the face of a return to less processed-sounding and supposedly more authentically ‘vintage’ guitar tones. However, a chorus's ability to thicken-up a single guitar whilst adding a characteristic depth and shimmer shouldn’t be overlooked. The CH-50 delivers the required amount of jangle to clean guitar sounds and combined with the DL-50 delay this chorus pedal powerfully evokes the feel of the 1980s, when more textural guitar tones reigned supreme! Hooked up with a distortion pedal, the CH-50 lacks the transparency of a typical chorus pedal; instead the CH-50 tends to dominate the mix, adding a thick phased tone instead of the subtle doubling or atmospheric wash that one would normally associate with this type of effect. All in, this is still a great sounding pedal but its circuitry does perhaps let it down when used in combination with a distortion box.

The DL-50 analogue delay takes you right back to those classic '80s sounds! The maximum delay time of 800ms feels very generous and the interval between the original note and the delayed signal is virtually wide enough to enable a fairly passable impression of Brian May’s famous ‘Brighton Rock’ solo - which is still viewed as something of an analogue delay tour de force. Mixed fairly low, the warm-sounding analogue delay makes a very effective alternative to a reverb, while adjusting the delay level to more prominent settings graces the guitar tone with a pleasing textural depth, you can even set the delay time to the type of rhythmic pulse that U2’s Edge has virtually copyrighted on the way to creating his unique signature tone. With a warm, organic sound and decent build quality we can’t see why this humble delay pedal couldn’t become a mainstay of any well-rounded effects setup.

These three pedals are the first Chord products to pass through our hands and we were very impressed by the value they offered. They would make very good additions where you only wanted an effect for one or two numbers, where you were working to a very tight budget and (with an eye to the Christmas and birthday present market) they would make excellent presents for a beginner. If the rest of Chord's range of instruments and accessories offers the sort of price/quality ratio we saw here then the company has done impoverished musicians a very real favour by launching.