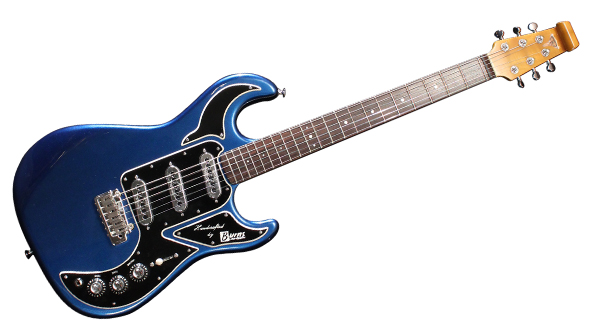 The unique appearance of Burns guitars divides opinions but one of the advantages of being so distinctive is that the brand has a hardcore following. Those who love them, really love them. The distinctive looks, coupled with factors about which there is general agreement, like great tones, construction, and the fact that vintage styling is very much the 'in' thing, has helped Burns remain in business. We have had a few Burns pass through our hands at GI Towers and while the looks have always been up for debate, there has been no debate about the fundamentals - everyone agrees that they play and sound great. In this review we are looking at the Burns Marquee Pro, will it hold true for this model? Be sure to check out the video to hear it for yourself.

The Marquee guitar was developed as a budget version of the successful Custom series Hank Marvin Guitar, keeping as many of the original features as possible. This guitar has won high praise in the European press and was actually awarded Guitar of the Year in 1999 and 2000 (there's a 'Guitar Of The Year Award? - who knew? Ed). In fact it is the best-selling guitar in the company's Club series.

The main features of the Marquee model are an alder body, bolt-on hardrock maple neck and 22 fret rosewood fingerboard. The finish and attention to detail overall on our sample, was top notch. The body and neck wood combination gave great tone continuity and sustain with the rosewood fingerboard adding warmth to the tonal spectrum. I will say that this is quite a heavy guitar but that produces a fair amount of bottom end and depth even when unplugged.

The scroll headstock is a unique design feature and adds a fair amount of density to the guitar, but luckily doesn’t unbalance it. Wilkinson tuners keep everything in check, and make string changing a breeze. The 25.5”, 22 fret neck was comfortable to play, with great action and good intonation throughout, although the back of the neck is varnished which some players won’t like as it can cause hands to stick once things get a bit sweaty!

The body is a familiar comfortable shape, with a decent enough cut-away for high end access. The bridge on this guitar is a tried, tested and loved Wilkinson. Set as a floating bridge, the action was smooth and consistent throughout its range, a push-in trem arm operates it, and was comfortable in use and easy to grab, once again there were no turning issues even after giving the whammy a fair amount of abuse. Three Burns Tri-Sonic single coil pickups are fitted to this guitar, controlled by a five-way blade switch, plus a push pull tone pot to set various pickup configurations. These pickups sound great, with plenty of warmth and mid-range punch. Tone controls work as expected, and the push pull tone control is a nice addition, meaning you can blend neck and bridge pickups to get that “Tele type” tone. It's a very versatile set-up.

One final thing to give a mention to is the Burns Gear-o-Matik Gearbox. Designed in the '60s by Jim Burns to allow fine neck setting. Effectively, it couples the steel truss rod tensioned through the neck to a gearbox with a hefty cog and worm which provides micro adjustment. It's a substantial bit of kit that once again adds more weight, but if you’re into micro-fine tuning your neck, then this is definitely for you!

Overall, the Burns Marquee Pro was brilliantly set-up which really complemented the fantastic tuning stability due to the Wilkinson hardware. The Burns pickups deliver a pleasing array of tones and dynamic range, with the fun bonus of a push-pull tone pot. The guitar is comfy to play, if a little on the heavy side. Looks aside this is another top notch guitar from Burns well worth checking out, if you are bored with same old, same old and, especially, if you are attracted by that characteristic 1960s style.