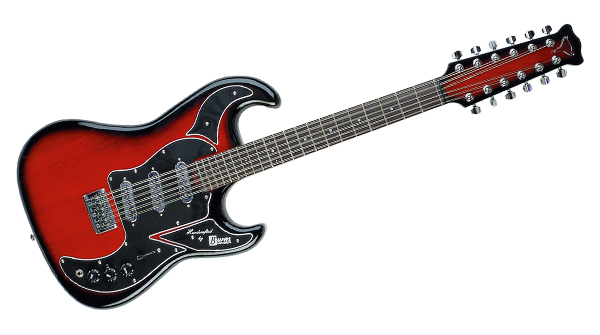 If you judge these things by the number of guitars sold, Burns probably remains the single most successful British guitar maker in history. The company, the brainchild of Jim Burns, began life back in the 1960s, rapidly achieved huge success and looked set to make the transition to international fame and fortune, when it was sold to the (then) US giant, Baldwin, back in 1965. Not to mince our words, Baldwin might as well have dug a big hole and dropped Burns in it. But by the 1980s, Jim was back,with the first of what was to prove, sadly, a succession of failed attempts to revive his reputation as a guitar maker, before his death in 1989.

Despite this sad end, for a generation of 1960s British guitarists, the Burns name is evocative of a golden era, when even the Shadows sported Burns guitars, having abandoned Fender, and almost every aspiring British Rock guitarist either had a Burns at one stage, or really wanted one.

Today, Burns exists in two forms. There are handmade models, selling for very serious money, and a range of far more accessible versions, formerly made in Korea, now in China. So when our Editor spotted a Burns Double Six 12-string in the hands of Wishbone Ash's Andy Powell (no stranger to fine guitars!) he whistled one up from the UK distributor and, as the man who recently took on the equally legendary Rickenbacker 12-string, back in Gi Issue Four, guess who got to review it?

The Double Six features a basswood body and bolt-on hardrock maple neck, finished in a very nice green burst with a classic polyester finish. You can had red if you prefer and there are rumours of some white ones, recently. A rosewood fretboard is complemented by vintage sized frets and a brass nut, with a wider string spacing than other 12 strings, allowing for easier playability and fewer fretting errors. Tones are supplied by three vintage Burns Trisonic pickups finished in chrome to match the other hardware and a Gotoh bridge gives a great upgrade from the original '63 model, allowing for individual saddle adjustments for each string.

This model features smaller, more accurate tuners than the original, though their size does make the headstock look enormous, but it's certainly not an ugly design and tuning stability was very solid with the guitar arriving perfectly in tune out of the case.

The Double six is a surprisingly light guitar considering its ample dimensions and the contours fit very snugly into the body allowing for comfortable playing positions whether stood up or sat down. The wider neck may cause problems for those with smaller hands but I very much appreciated the extra string spacing and found this to be one of the most comfortable electric 12-strings I've tried. Yes, even simpler to play than the Rickenbacker 330-12 I recently looked at. Chordal playing was easy and accurate and right hand picking was less 'hit and miss'.

The finish and build quality belie the low price tag, with no obvious construction issues and good quality hardware. In fact, the guitar feels like it comes from a much higher price bracket and is all round a delight to play. To be blunt, the somewhat angular design won't be to everyone's taste and I don't think I would describe this as a beautiful guitar, but it will appeal to players after a vintage, British instrument. Burns has some very serious fans and collectors and if that is the kind of thing they like, they'll love this very affordable incarnation!

Tonally, the Double Six is a delight, with every combination of pickups sounding highly musical and inspiring. Whilst 12-strings will never be the most versatile guitars on the market, the Double Six is more so than most, with the multitude of pickup configurations derived from its 5-way switch and push/pull tone control allowing for a further three sounds. The volume and tone controls were smoothly tapered and with a chorus and delay pedal put through the loop of our studio amp we were in tonal nirvana! Combined with the great playability this presents a very inspirational package that is hard to put down.

The Double Six is supplied in a high quality hard case with a rather garish grey snake-skin type design. The sheer fact that a case is included is fantastic at this price - even if the finish is very much a matter of taste. Within the case you'll find a nice padded Burns strap and all the tools you'll need for set-up and maintenance. These extra touches are very much appreciated and make the package feel superb value for money.

I think the 12-string market has limited appeal so it's unlikely that this guitar will set the world on fire. They aren't the most versatile instruments but the Burns certainly stacks-up very well next to the other 12 strings on the market, and with greater playability. Whilst there are certainly prettier guitars out there, the Double Six deserves your attention simply because it represents such great value and feels and sounds superb to play. Frankly - it's a bargain.