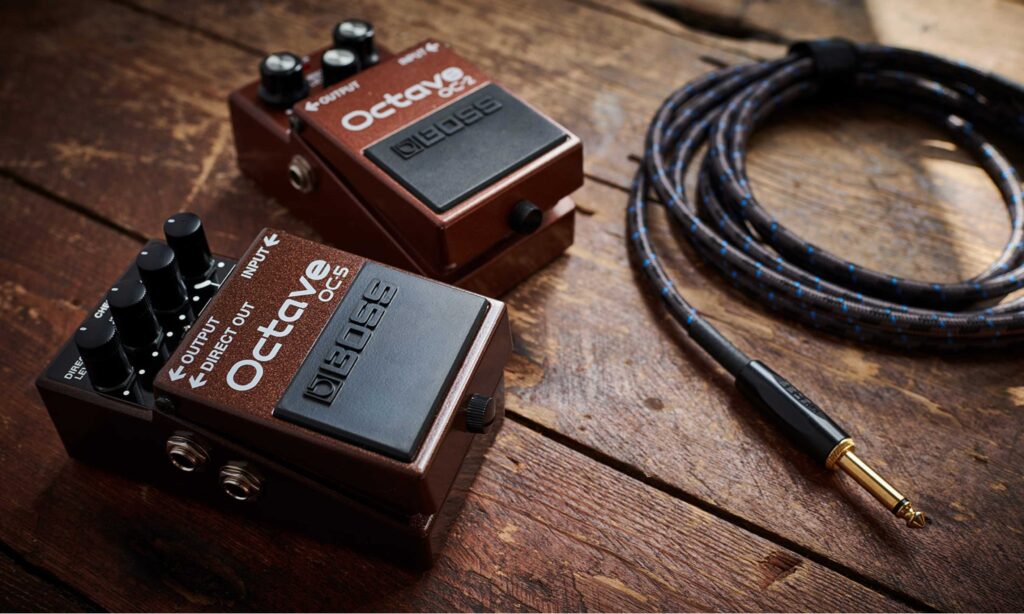 Octave pedals of the past decade have presented guitar and bass players with a tough decision: Are you searching for that classic OC-2–style octave effect — the sound most of us guitar and bass players associate with the octave pedal — to add weight to your leads and walking lines? Or do you want modern tracking and polyphonic capabilities to help flesh out chords in a solo setting? Well, with the BOSS OC-5 Octave pedal, now you don't have to choose. Sam Bell tells us more.

Who's the Boss? Well, it's safe to say BOSS is, that is, the Guitar Pedal manufacturer Boss Pedals. In this issue of Guitar Interactive, I have the joy of taking the latest generation of BOSS's famous Octave Pedal. Back in 1982, the company released the OC-2. This pedal gave users the option of having a monophonic (single note at a time) 1 or/and 2 octaves below the pitch they were playing. This opened up the sonic landscape for Guitarists. Enabling users to create blackhole inducing heavy riffs all the way to laser-like octave solos when playing in the upper octave's. Check out Prince's very famous guitar intro to 'When Doves Cry' to hear this effect used in this context. It's been said that Prince was an avid user of BOSS's effect pedal, so this could have possibly been the use of one of the early Octave Pedal models.

Later on, as Shoulder Pads started to become uncomfortable, BOSS released the OC-3, which featured a Polyphonic Octave option. This enabled users to play more than one note at the same time whilst using the effect; this created almost Organ sounds. It's quite an incredible and inspiring sound. However, all this romanticising about the old octave pedals sets the tone for the NEW OC-5 Octave Pedal from BOSS, which makes this one different and unique from the previous generations.

For a start, we don't have to worry about losing any of the classic features. The OC5 includes our Monophonic (Vintage Mode) octave and our Polyphonic Octave Mode. We're also now treated to two excellent new modes. The first option is to have a 1+ octave up, which is super useful to have within this pedal. This can add clarity and definition when combined with the -1 and -2 octaves. All the octaves can be used on their own, mixed in together however you wish. The pedal even gives you the option to send a direct signal to another amp so you can have a Wet/Dry set up.

The most notable new feature of the OC5 is the option to 'isolate' the lower range of the guitar. You can have the pedal only pick up on a certain range of notes. For example, you can set it so that it picks up notes on the Low E and A strings and lets any notes higher in pitch through without the octave effect. This way, you can really separate the two sounds, on one guitar, through one pedal! Amazing!

It's also important to note how well the OC5 tracks what you're playing. From super-low, dense chord voicings to fast legato runs, the pedal will keep up effortlessly. This is what the pedal is known for and one of the reasons why the BOSS Octave pedal holds its own today, almost 40 years later after the release of the first Octave pedal.