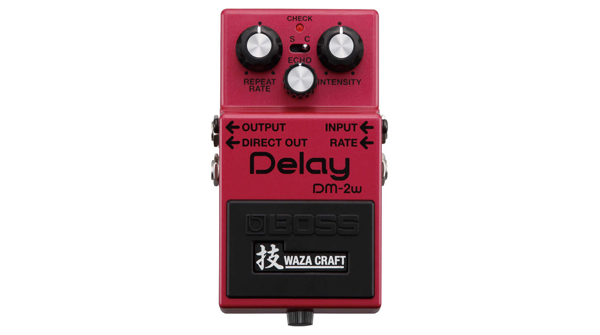 Roland's Boss pedals have been with us for 37 years. Boss was the company that revolutionised the mass production of reliable and functional pedals that were tough and well designed, as well as being straightforward and easy to use. Yes, there were other players around at the time, but Boss won a reputation for quality that has stood it in great stead all these years.

The choice and range from Boss has always been large and some discontinued pedals have taken on a cult status with prices to match. I am personally still looking for an original Dimension D or the rare Vibrato pedal, so long as they aren't being sold at inflated 'collectable' prices. That collectable factor also produced a sub-culture of its own. When the 'boutique' pedal trend hit in the late '90s, many smaller modding companies took Boss pedals as a starting point to tweak and 'improve' - with varying degrees of success. Any stock Boss pedal will do the job it's designed to do and in my opinion, most times, any improvement in 'tone' should come from the player's hands rather than the cost or spec of a stomp box.

As you'd expect, Boss has noticed how its pedals often end up being 'improved' or modified and has created its Waza Craft division to do it themselves. Waza translates to 'Art and Technique' apparently, and though the Waza range of pedals is small at the moment, I have sneaking suspicion that there will be many more Boss favourites getting the Waza Craft treatment in future. The guys that originally designed and built those '80s Japanese pedals are the brains behind the Waza Craft pedals. Most are still with company and those that aren't have been tracked down to contribute to what is an interesting development.

Each Waza Craft pedal offers more options and tweakability that the original and in the case of this DM-2W it's a welcome return to an original that was discontinued in 1984, after just a three year run in production. The original version is now collectable and commands a premium due to its rarity.

I'm lucky enough to own an original analog DM-2, which I bought as a kid around 1982. Like everybody else back then, when Boss launched its digital delays in 1983, I swapped over, which is probably why Boss discontinued the modest 300ms analogue DM-2. Sales must have dropped like a stone once the DD-2 arrived. But in our race for more performance, what many eventually began to feel was that something had been lost from the original tone. As a consequence, analogue delay has many fans due to its warm lo-fi repeats. The Waza Craft DM-2W offers a welcome return to a great cult pedal.

As nostalgic as we are about the original '80s DM-2, however, its uses were fairly limited due to that 300ms barrier. It's great for some warm rockabilly slap back, or some reverb simulation hi repeat delay wash behind your solos, but other than that its uses were limited. This Waza version, however, has a custom mode which switches in 600ms of delay that also has some modulation on offer to simulate tape flutter.

600 milliseconds should be enough for most uses and the warmth and tone in this setting is fantastic. You also get an expression pedal input which allows you to mess with the delay times via your foot, which can give some interesting pitch changing madness if you so desire, or it enables you to change your delay time to be in time with the song you are playing, although this is fairly tricky to do accurately with your foot. You also get a direct out which give you some interesting two amp set-up potential, with delay one side and direct dry signal the other.

If it was a choice between buying a second hand vintage DN-2 at an inflated price, or a brand new DM-2 Waza at its very reasonable asking price, I would go for the Waza every time. It has the mojo of the original in its standard setting and complete usability in its custom mode, making it easily capable of standing up to today's competition. The slight flutter on the repeats in custom mode is particularly sweet and addictive and I will probably pick myself up one just for that.

I am a pedal junkie and own a lot of the high end stuff, but really you can't go wrong with a sturdy reliable and simple Boss pedal, and this Waza Craft version of a classic is fantastic if analogue delays are your thing. We think it's selling at a very good price, too, hence the four and half stars rating.