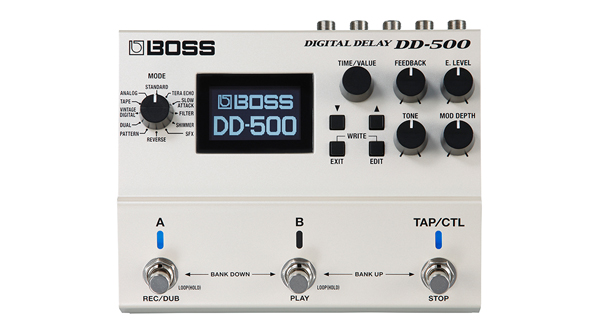 Pretty much every guitar player has owned a Boss effects pedal at some point in his life, with the company often being seen as the entry point for decent quality stomp boxes at an affordable price. Generally considered to be at the budget end of the market compared to the raft of boutique pedal manufacturers that have sprung up over recent years, it would seem that Boss has recently made a concerted effort to bring its appeal to a more ‘professional’ audience and their newest offering, the DD-500 Digital Delay, is a great indicator of just where the company is heading.

The DD-500 is in the mode of a recent number of delay units that are designed to cover all possible delay requirements in a single, compact floor unit with minimal fuss and maximum features. Other companies have had a go at this format with varying degrees of success but a certain high end, US-made, grey delay unit won’t have passed by the attention of the tech guys at Boss and the quality and success it has achieved will have probably played some part in the DD-500 feature set and design.

The DD-500 features 12 different delay modes, each with a large number of adjustable parameters for virtually endless sound designing and preset creation. The twelve modes are listed as, Standard, Tera Echo, Slow Attack, Filter, Shimmer, SFX, Reverse, Pattern, Dual, Vintage Digital, Tape and Analogue - a list that should keep even the most delay addicted players happy for years to come. A single dial switches between delay modes with five other dials for controlling Delay Time, Feedback, Effect Level, Tone and Modulation for easy editing from the front panel without ever having to access a menu. For some players this will be more than enough editing power but for those requiring something more specific, each delay mode has a number of deeper functions such as full EQ settings, modulation speed and depth, pattern selection, attack speed, filter selections, repeat octave selections, wow and flutter and many, many more.

The sheer number of options on board is staggering but, thanks to an easy to navigate and understand menu system, the Boss rarely becomes overwhelming or frustrating. A single push of the edit button takes you into a main edit menu, from where you can alter patch specific functions, pedal wide parameters such as midi controls and expression pedal assignments, utility functions such as LCD contrast and all manner of other useful things. Navigating through menus with the cursor keys is simple and the small LCD screen is easy to read with a high resolution display and a good choice of font. All of the controls feel very solid in use and the unit is generally built to ‘bomb proof’ standards with a metal chassis and top and non-latching footswitches.

Speaking of footswitches, the unit has three of them and they can be mapped to multiple functions on the pedal using the control menu. By default, the first two switches, A and B, are mapped to preset selection, of which there are two in each of the 99 available banks (that’s more delay presets than you are ever likely to use!). The third is mapped to Tap Tempo but can be reassigned to any of the other mappable functions on the pedal, including an inbuilt self-modulating expression system for some truly unique effects and the ability to access 1/2, 1/4 or even 1/8th the delay time of the patch with a single press.  Up to eight different parameters can be assigned to a single footswitch for some truly mind bending effects.

Bank switches can be achieved by pressing A&B together or B&TAP/CTL together to move down and up respectively. A far better method is to use the excellent MIDI support with some form of midi controller for selecting presets, as any controller capable of sending MIDI program changes can select presets on the DD-500. The MIDI functions on offer are extensive and highly mappable, allowing for synchronisation with a DAW or MIDI clock device and mapping controllers to all sorts of functions within the pedal - a superb addition at this price point and footprint. Boss has even included a full 60 seconds (120sec in 48kHz mode) looper system that can be activated by holding down switch A or B for a few seconds, allowing the user access to a superb looping facility whilst still having all of their delay sounds active.

In use, the sound quality is amazing, thanks to 32-bit, 96khz operation and quality A/D D/A convertors for pristine delays. In either true stereo or mono operation, the high powered DSP provides delays that are as good as anything you’ll find elsewhere on the market and some of the sounds on board simply couldn’t be created by any other pedal right now, especially when you consider the amazing level of control available. The Tera Echo and Filter delays are particularly impressive with none of the artificial, thin nature that effects of this type sometimes produce and the Shimmer will be very much appreciated by fans of that particular effect.

Tape delays and analogue delays exhibit the exact feature set and sound you would expect and the digital variants are every bit as crisp or grungy as you want them to be. The modulation is excellent, adding a real warmth and lushness to the repeats without ever getting in the way of your sound, speaking of which, your original signal is always in the analogue domain with a choice of true bypass or buffered bypass operation as required.

Boss has pretty much knocked the ball out of the park with the DD-500. It’s hard to think of another delay unit that crams so many features into a small package, with sound quality for days, this level of control and MIDI functionality for this amazing price point. When you also throw into the package that the DD-500 has the amazingly small current draw of 200ma and can be powered by four AA batteries, the package becomes almost irresistible. Boss is making a serious statement in the delay market here and everyone else better watch out - one will be going on my pedal board for sure. Essential stuff!